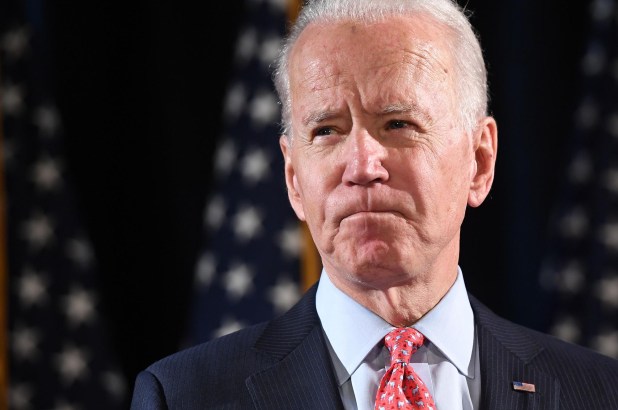 Dems would never call for scrapping debates if Joe Biden were a gifted orator. AFP via Getty Images

Get this: Democrats want to scrap this year’s presidential debates. It’s not hard to guess why.
“Whatever you do,” CNN’s Joe Lockhart, who served as President Bill Clinton’s press secretary, advised Joe Biden last week, “don’t debate” President Trump.
Dem strategist Zac Petkanas argues: “This is not a normal presidential election, and Trump is not a legitimate candidate” and so doesn’t deserve a debate. (Never mind that Trump won an overwhelming majority of electoral votes.)
At The New York Times, Elizabeth Drew says debates aren’t substantive. She discounts the “relevance” of the “carefully prepared one-liner” that sways viewers.
Just how dumb do they think Americans are? The real reasons Dems don’t want Uncle Joe in a live, unscripted square-off couldn’t be clearer: They’re absolutely terrified he’ll be a disaster.
It’s why they’re so happy he’s spending much of the campaign in his basement, rather than talking with people or appearing live on TV.
Before last month, he went 90 days straight without a press conference. In a tweet, Sen. Ted Cruz (R-Tex.) dubbed Dems’ “scrap the debates” push “Basement strategy, part 2.”
Of course, Biden backers are right to be worried about unleashing the presumed nominee. Drew claims he’s “done just fine” in debates, but she was likely on Mars during the primaries.

Recall how in one debate answer on segregation, Biden meandered through a reply that mentioned his wife and former wife; said we must “make sure that every single child does, does in fact, have 3-, 4- and 5-year-olds go to school [sic]”; and insisted social workers help parents raise kids.
He added: “Play the radio. Make sure the television — excuse me, make sure you have the record player on at night.” He ended with a discussion of Venezuela.
Look, the 77-year-old Biden is famous for his gaffes, incoherent sentences, contradictions and non-sequiturs. It’s why his cognitive state has become an issue.
Fact is, Dems would never call for scrapping debates if their nominee were a gifted orator. Yet if Biden can’t be trusted in front of a TV camera, how on earth can he be trusted to run the country?
Source>https://nypost.com/2020/08/03/suddenly-dems-want-to-scrap-presidential-debates-ha/
Posted by theodore miraldi at 11:17 AM