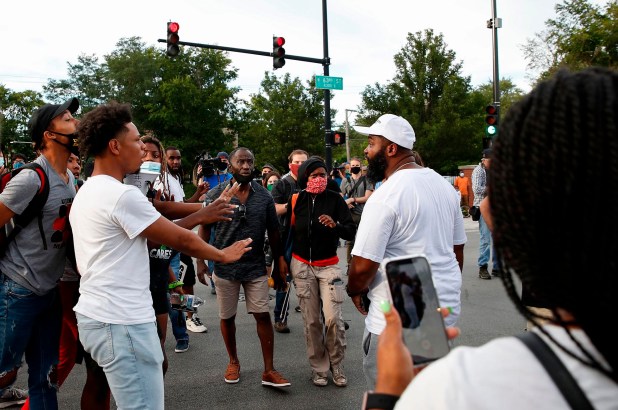 A resident (right) of Chicago's Englewood community exchanges words with BLM protesters (left) during a rally against the Chicago PD. AFP via Getty Images


The police have been scorned, demonized, despised and depleted by the woke crowd calling the shots in New York City. Lawlessness, homelessness and hopelessness once again threaten to transform this town into an open-air restroom by day, with mayhem and shootings reigning by night. There is, however, something we can do to stop what seems to be an inevitable slide into the abyss.
New Yorkers must band ­together and fight the madness, like the good citizens of the city of Chicago. They’re mad as hell about the politician-endorsed chaos infesting the streets, and they’re refusing to sit back quietly and take it.
It’s been frightening, for sure. On Monday night, sick kids and their families, more than 30 groups in all, cowered in fear inside a Chicago Ronald McDonald House as looters smashed the front door while trying to get inside.
But on Tuesday, residents of the Windy City’s South Side neighborhood of Englewood decided they’d had enough. In that nabe, a black man allegedly initiated a gun battle with police on Sunday, sparking unrest and widespread looting. But good people joined forces to drive out Black Lives Matter protesters and others who aim to leave police as helpless as ailing children and ordinary folks.
VIDEO
“If you ain’t from Englewood, get the f - - k out of here,” local resident Darryl Smith railed at protesters.
“Y’all don’t come out when a kid gets shot. Y’all come out when it’s got something to do with the f - - king police,” he shouted, according to the Chicago Sun-Times. He demanded that marchers take up their beefs with authorities and leave everyone else alone.
But then, as protesters made their way to a police station, ­locals pushed back against the mob. This caused marchers to disperse, as one neighborhood fought back against the outside agitators they believe ruin things for everyone.

Good for them.
These small heroics prove that not every person living in a neighborhood populated mainly by minorities wishes to burn it down. So when Chicago BLM organizer Ariel Atkins excused weekend lootings as “reparation,” a quieter but even more insistent voice responded, “Hell, no.”
The truth is that most people just want the same things: Jobs. Safety. Respect. Most people also know that the vast majority of ­police officers aren’t out to kill them. And for those not in the top 1 percent of this country’s earners, cops are the only ones standing between them and trouble.
As a result of George Floyd’s brutal slaying by Minneapolis ­police, the mayors of Los Angeles and San Francisco, as well as leaders of other cities, have announced plans to defund the police. In Gotham, the City Council, with the full support of Mayor Bill de Blasio, has cut or diverted more than $1 billion from the Police ­Department’s nearly $6 billion ­annual budget. Hizzoner’s wife, Chirlane McCray, whom he has called his closest adviser, envisioned a police-free Big Apple as “like a nirvana, a utopia …”
It comes as little surprise that a key group of folks, for the most part, disagrees: black people.
In a Gallup poll released Aug. 5, black Americans had been asked whether they want the police to spend more time, the same amount of time or less time than they currently do in their areas. A clear majority — 61 percent — said they want the police presence to remain the same as it is now.
Another 20 percent want police to spend more time in their neighborhoods. Just 19 percent want to see them less. The definition of nirvana appears to change with one’s bank account and status.

For everyone, the marginalization and intimidation of police is having a sudden and dramatic effect. After decades of near-peace, New York is suffering a terrible spike in shootings.
Last weekend, the city surpassed 1,000 shooting victims. A week earlier, the number of shooting incidents throughout the city eclipsed the total number for 2019 — with five months left in the year. On top of everything, homeless vagrants have been dumped in hotels on the Upper West Side and Chelsea in an effort to shield street people from COVID-19, forcing those who live in the two neighborhoods to deal with public urination, masturbation and drug use, plus the presence of convicted pedophiles near places where children play.
It was nice to see the red beret-wearing Guardian Angels patrolling the Upper West Side, like a vision out of an earlier, grittier, nastier New York.
Still, we can all do more.
Source>https://nypost.com/2020/08/13/pushback-in-chicago-as-blacks-are-sick-and-tired-of-looters-anarchists/
Posted by theodore miraldi at 12:31 PM