VIOLENT Clashes in DC Between Protesters, Police After RNC

Tensions outside the RNC escalated after the event ended 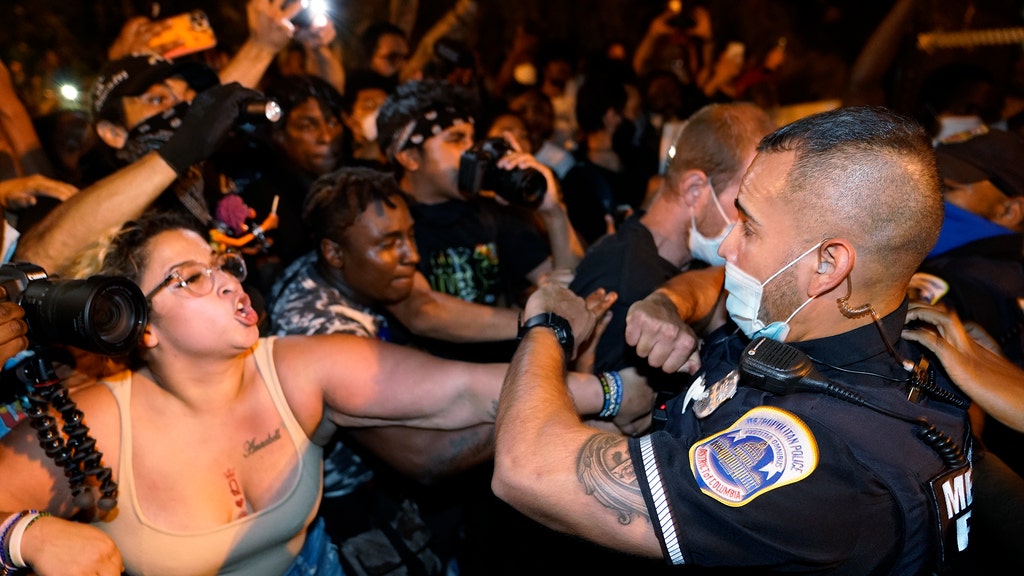 Violent clashes erupted in Washington,  D.C., between protesters and police after the conclusion of the Republican National Convention (RNC) on Thursday night.
The protests started as a “noise demonstration and dance party" and seemed to intensify as the night continued. Videos emerged on social media that appeared to show city police clashing with protesters throughout city streets.
Protesters yelled and threw water bottles at police at the historic St. John's Church, which is near Black Lives Matter Plaza. Police made a string of arrests.
SEN. RAND PAUL THANKS DC COPS FOR SAVING HIM FROM 'CRAZED MOB' AFTER RNC
Metropolitan Police are confronted by protestors as police carry away a handcuffed protester along a section of 16th Street, Northwest, renamed Black Lives Matter Plaza, Thursday night, Aug. 27, 2020, in Washington, D.C., after President Donald Trump had finished delivering his acceptance speech from the White House South Lawn. (AP Photo/Julio Cortez)
Tensions escalated at one intersection in the nation's capital when police arrived on bicycles to confront demonstrators.
At least one protester was seen grabbing an officer's bike while another held up a Black Lives Matter sign in the face of a member of law enforcement -- as the crowd advanced, according to a video. A brawl ensued between protesters and police, which saw punches thrown.
Video also emerged of a man dressed in blackface who appeared to be punched by a protester.
DC MAYOR BOWSER CONDEMNS 'HIGHLY INAPPROPRIATE' BEHAVIOR OF BLACK LIVES MATTER PROTESTERS BERATING DINERS
The violent protester ran off, and a chase ensued before an officer tried to place him in a headlock. A crowd would descend on the officer and at least one person yelled at police to "get off him."
A separate video saw a handful of officers attempting to arrest a protester. It's not clear if police were arresting the same man who led officers on the previous chase.
Video on social media also appeared to show a crowd chasing and jeering Sen. Rand Paul, R-Ky, who was escorted by D.C. police as he returned to his hotel. An officer was captured on video being shoved by a protester and was nearly knocked over. Paul appeared to help steady the officer.
CLICK HERE TO GET THE FOX NEWS APP
He would later thank D.C. police for saving him from a "crazed mob."
Source>https://www.foxnews.com/us/rnc-prompts-violent-clashes-dc-protesters-police

Posted by theodore miraldi at 10:40 AM