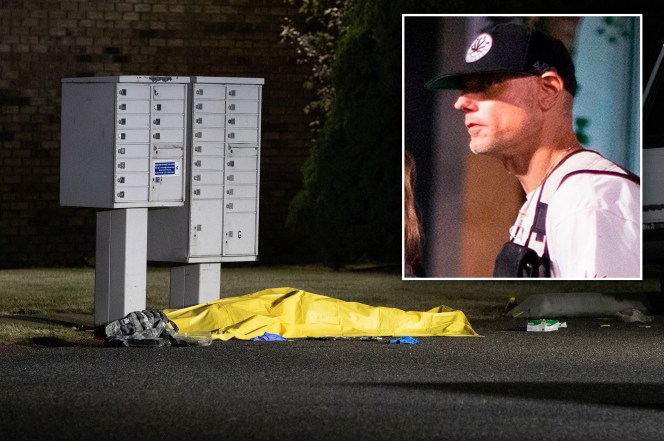 
The Antifa-supporting security guard wanted in the killing of a right-wing protester in Portland fired “40 or 50” rounds from an assault rifle at cops before he was shot to death Thursday in Washington state, witnesses said.
Michael Forest Reinoehl, 48, was fatally shot by officers around 7 p.m. in Tanglewilde after a warrant from the Portland Police Bureau was issued for his arrest earlier in the day, The Olympian reported.
Officers from the Pierce County sheriff’s fugitive apprehension team were surveilling the area when they saw Reinoehl come out of an apartment and walk to a car, appearing to be armed.
“The suspect came out to the car,” Pierce County sheriff’s spokesman Ed Troyer told the newspaper. “They attempted to put him into custody and shots were fired.”
Thurston County sheriff’s Lt. Ray Brady said there was a “confrontation” between officers and Reinoehl, with officers firing into the vehicle, sending him fleeing. More shots were then fired.
“The information we have at this time is that the subject was armed,” Brady told reporters late Thursday.
He would not say whether Reinoehl fired his weapon.
But witnesses Chad Smith and Chase Cutler, who were about 50 feet away from the melee, said they saw the suspect get out of his car and fire what they believed was an assault rifle at the officers. They heard 40 or 50 shots, with officers returning fire, striking the man.
“It reminded me of a video game,” said Cutler, who was working on cars with Smith nearby in Tanglewilde, which borders the city of Lacey.
None of the officers, who were working as part of the US Marshals Service Pacific Northwest Violent Offender Task Force, were injured.
Brady said all four officers — from the state Department of Corrections, the Pierce County Sheriff’s Department and the Lakewood Police Department — fired their weapons.
Reinoehl died at the scene. He was wanted by authorities for the shooting death of Aaron “Jay” Danielson, 39, at a protest in Portland last weekend.
Reinoehl’s death came hours after he appeared to admit to shooting and killing Danielson in an interview with Vice News that aired Thursday.
Reinoehl, who described himself as “100% Antifa,” insisted he acted in self-defense and “had no choice” when he shot the right-wing supporter in the chest as Black Lives Matter protesters clashed with President Trump supporters in Portland on Saturday.
Source>https://nypost.com/2020/09/04/suspected-protest-shooter-michael-reinoehl-had-gun-when-killed-by-police/
Posted by theodore miraldi at 9:54 AM