CENTRIST Democrats Got Their COVID Bill, Now They Want a VOTE 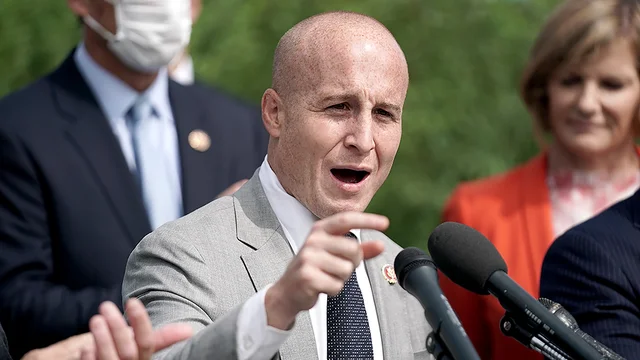 But the same moderate Democrats she’s aiming to appease with the $2.4 trillion proposal want something more: a guarantee they’ll get to vote on it.

“They haven’t committed to a vote yet,” said Rep. Max Rose (D), a vulnerable New York freshman who flipped a GOP seat in 2018. “I’m certainly not satisfied until they do.”

The comments highlight the challenge facing Pelosi and her leadership team, who are fighting to win an agreement with the White House on emergency COVID-19 aid while also seeking to protect vulnerable centrists wary of leaving Washington without acting on some new relief package.

Pelosi had held firm to her demand for at least $2.2 trillion in new stimulus spending — a figure well below the $3.4 trillion Heroes Act that House Democrats passed in May — even after negotiations with the White House broke down in early August. In doing so, she resisted the pleas of impatient moderates in her caucus calling to move a fresh package while the bipartisan talks were stalled.

On Thursday, as the grumbling from moderates grew louder, Pelosi relented, asking the heads of key committees to assemble a Democratic proposal reflecting the party’s priorities in addressing the health and economic wreckage caused by the deadly pandemic.

But party leaders, still hoping for a bipartisan deal, have not promised a vote on the package before the House recesses on Friday for the final stretch of campaigning.

House Majority Leader Steny Hoyer (D-Md.) has, for weeks, endorsed the notion of voting on a Democratic bill if no deal emerges with the White House. On Thursday, however, he said there’s no formal plan to bring the nascent partisan package to the floor, citing a preference for a bipartisan agreement before the end of next week.

“I don’t have an expectation at this point in time, because our focus is we want to get a deal or an agreement with Mnuchin and the Senate … we want a bill passed and signed,” Hoyer told reporters in the Capitol, referring to Treasury Secretary Steven Mnuchin. “So that’s what our focus is, trying to get an agreement before we go home."

Pelosi and Mnuchin spoke several times this week about COVID-19 relief, including a phone call on Friday afternoon. “The two agreed to continue their conversation in the days ahead,” said a Pelosi spokesman.

The new Democratic package is expected to include all the major elements of the Heroes Act: another round of stimulus checks for most Americans; more money for unemployment insurance, rental assistance, food stamps and the Postal Service; and billions more for medical equipment and coronavirus testing.

“We're heading toward a resurgence of the virus in the fall, and until we defeat the virus you're not going to have full economic recovery," said Rep. Richard Neal (D-Mass.), the head of the Ways and Means Committee who’s drafting large parts of the package. "That's what this is about."

The proposal will also include provisions not found in the Heroes legislation, including funds for the Paycheck Protection Program to prop up small businesses, as well as emergency aid for the restaurant and airline industries.

Airline CEOs and union leaders, lobbying lawmakers at the Capitol this week, said they need $25 billion more in aid to stave off tens of thousands of layoffs that are set to occur at the end of the month; relief for airlines has been a priority for the White House.

With the number of U.S. coronavirus deaths topping 200,000 — and unemployment filings still at record highs — rank-and-file Democrats cheered the arrival of the new proposal, in hopes that it might pressure Republicans to endorse an agreement that can become law.

"The key thing is that people keep negotiating," said Rep. Jim Himes (D-Conn.), former head of the New Democrat Coalition. "And it sounds to me like putting some meat on the bones of $2.2 trillion is a pretty good negotiating tactic."

On Friday, the Capitol took a brief pause from the presidential campaign and the fight over COVID-19 aid to remember Justice Ruth Bader Ginsburg, who became the first woman to lie in state in the building.

But moderates were determined to keep the heat on Pelosi heading into the weekend. Vulnerable freshman Rep. Cindy Axne (D-Iowa), who flipped a GOP-held seat in 2018, penned a letter to Pelosi on Friday beseeching the Speaker to bring “a revised and streamlined COVID-19 relief package to the floor next week.”

“Americans are counting on us; they cannot wait any longer,” the Democrats wrote. “We are asking you to bring up a bill that demonstrates our commitment to meeting [the White House and Senate] in the middle, as we have expressed our willingness to do, and advance it through the House with the haste this crisis demands.”

But the letter highlighted a small fissure among vulnerable moderates. The Axne group told Pelosi it wanted a vote “regardless if the White House or Senate agree.”

“We must show the American people that the House of Representatives is open to negotiations and clear in our resolve to deliver aid for millions in need,” they wrote.

Another group of moderates — led by Problem Solvers Caucus Co-Chair Josh Gottheimer (D-N.J.), Abigail Spanberger (D-Va.) and Dean Phillips (D-Minn.) — wrote separately to Pelosi that a partisan, show vote just won’t cut it. They want a vote on a bipartisan “compromise” that is  “reasonable and that can be signed into law by the President of the United States.”

“Lives and livelihood are at stake and the window of opportunity is closing,” Phillips told The Hill. “America has rarely required its Congress to find common ground as it does now and I implore that we meet the moment.”