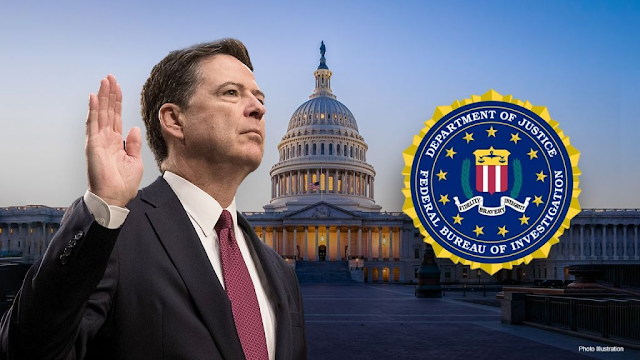 Former FBI director James Comey is being grilled by the Senate Judiciary Committee over exactly what he knew regarding FBI actions in the early stages of the Russia investigation – but early on in the hearing claimed ignorance of virtually every act that was mentioned during questioning.

A Justice Department Inspector General (DOJ IG) report previously found that the warrant application and subsequent renewals applications for surveillance of former Trump campaign adviser Carter Page contained inaccuracies and omissions and relied on the Steele dossier despite evidence that it was unreliable.

Comey opted not to deliver an opening statement Wednesday but welcomed questions. Committee Chairman Sen. Lindsey Graham, R-S.C., got right to the point and asked what efforts the FBI made to verify the dossier.

"I know nothing of Mr. Clinesmith," Comey said.

Comey passed blame for the warrant, claiming he only signed the certification for it, not the affidavit it was based on, but when asked who the committee should look to in terms of who was accountable for misleading the court, Comey again came up empty.

First Comey said to look at the IG report, but when pressed on whether he knew, he gave a familiar response.

Graham later discussed ex-spy Christopher Steele's sub-source, whom the FBI interviewed. The sub-source told the FBI that the information in the dossier was unreliable and was based on rumor. Graham noted that the sub-source was known by the FBI to be a possible Russian spy. Confronted with these details, Comey again pleaded ignorance.

"I don’t remember learning anything about Steele’s sources," he said. When asked if he knew that the FBI interviewed the sub-source in January 2017, Comey again said, "I don't remember."

COMEY ADMITS ‘I WAS WRONG’ ON FISA CONDUCT, REMAINS DEFIANT ON DOSSIER IN TENSE INTERVIEW

Asked again, Comey later said he did "not remember being told of any interview." When asked if he should have been told, Comey said he could not answer.

"Was this an important case for the FBI or was this a run of the mill thing?" he asked at one point, commenting on the lack of information Comey appeared to have.

Graham also brought up a U.S. intelligence community report that included information that salacious details about Trump in the dossier came from Russian intelligence.

"Did you know that when it came out?" Graham asked, emphasizing that parts of Steele's dossier were believed to be Russian disinformation, yet the FBI continued to rely on it anyway.

Graham went on to cite false details in the dossier, such as a reference to a Russian consulate in Miami that does not exist, and a trip that Trump attorney Michael Cohen was said to have taken to Prague that has since been debunked.

"They never corrected all the misinformation in the dossier," Graham said. "It was used over and over again, and they never told the court about how unreliable it was. Is that a small thing or a big thing?"

"Any time there are material omissions in an application to a judge of any kind, but especially an ex parte proceeding, it's a very important issue," Comey said.

Posted by theodore miraldi at 12:34 PM