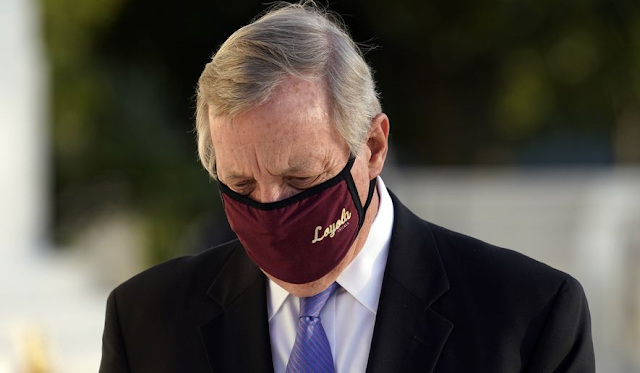 Sen. Dick Durbin said Sunday that Democrats have no way to block the confirmation of Judge Amy Coney Barrett to the Supreme Court.

Mr. Durbin, the Senate Democratic whip, said that while they may be able to drag out the process, it won’t be enough to extend it beyond the November election.

“We can slow it down, perhaps a matter of hours, maybe days at the most, but we can’t stop the outcome. What we should do is to address this now respectfully,” the Illinois Democrat said on ABC’s “This Week.”

Mr. Durbin also took a swing at Senate Majority Leader Mitch McConnell for not having worked on any bipartisan talks for COVID-19 relief but then “dropped everything” for the vacancy.

“Now we’re going hell-bent on getting this done before the election,” he said. “Of course, [McConnell] had to reverse the position he took four years ago, saying that we should wait till the next president to fill the vacancy.”

In the wake of the Justice Ruth Bader Ginsburg’s death, Democrats vowed to fight back against a swift Republican nomination process, with some on the left threatening impeachment. However, they have shifted to focusing more on driving out the vote.

Democrats have hammered Republicans this past week for blocking President Barack Obama’s nominee, Judge Merrick Garland, in 2016, arguing that the GOP’s quick nomination process is the height of hypocrisy.

Some on the left have called for expanding the court if Republicans succeed in naming a conservative judge in the liberal justice’s place.

The GOP defended their decision, arguing that their party controls both the White House and Senate, unlike the situation four years ago.

They also locked down enough of their members to push Judge Barrett through the Senate — with only Sens. Lisa Murkowski of Alaska and Susan Collins of Maine dissenting to having a nomination vote fewer than 40 days from an election.

Judge Barrett’s confirmation would mark a shift in the court, with a 6-3 conservative majority.

Posted by theodore miraldi at 11:48 AM