A vigil speaker declared that her organization and its allies would do whatever it takes to keep the Senate from holding hearings on a new Trump nominee, no matter who it is. 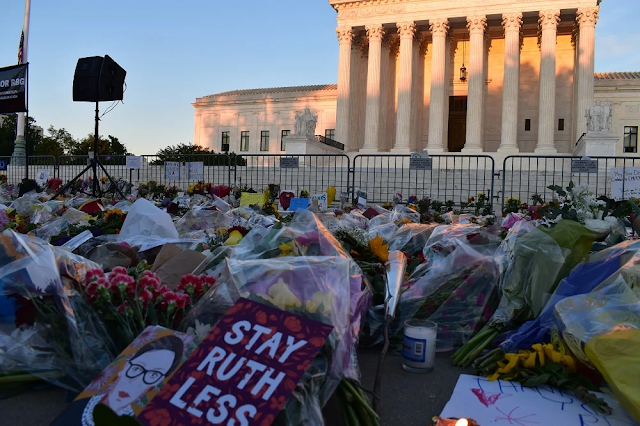 Both senators spoke at a vigil for Ginsburg Saturday night. The vigil was organized by Demand Justice, the group that led the charge against Brett Kavanaugh’s confirmation, as well as a coalition of leftist activist organizations.

Between music performances and traditional rabbinic prayers, speakers from the various organizations spoke to thousands crowded in front of the Supreme Court. Despite being surrounded by candles and flowers, the event felt more like a political rally than a vigil. Leftist Groups Threaten Senators to Get Their Way

Warren and Gillibrand had harsh words for President Donald Trump and Senate Majority Leader Mitch McConnell’s announcement that they would attempt to fill Ginsburg’s vacant seat before the election. Warren attacked McConnell for being willing to confirm a justice during an election year when he refused to do so with President Obama’s nominee in 2016.

“Today Mitch McConnell and his henchmen believe they can ram through a Supreme Court justice only 45 days from the election,” Warren said.

Gillibrand accused President Trump of hating half of the country and wanting it to burn. Of McConnell she said, “I’ve never seen someone more duplicitous.” She declared that in the next election, Democrats would choose a new president and flip the Senate.

“Until the people have spoken, there can be no consideration of a new Supreme Court justice to replace our beloved Ruth—none!” Becky Pringle, president of the National Education Association union stated. “We must send a message that if you don’t believe in us, then from the House of Representatives to the U.S. Senate [and] to the White House, we are coming for your jobs,” she declared. Ben Jealous, president of People for the American Way, warned Sens. Thom Tillis (R-N.C.), Cory Gardner (R-Co.), Joni Ernst (R-Iowa), and Lindsey Graham (R-S.C.) that if they want to keep their jobs, they should not vote for Trump’s nominee, no matter who it is.

It was unclear whether Jealous would support these Republican senators in choosing not to vote for Trump’s nominee. It seems likely. The left’s anger has been exacerbated by what they see as hypocrisy. When Justice Antonin Scalia died in 2016, McConnell refused to hold confirmation proceedings for President Obama’s nominee, Merrick Garland. McConnell claims the present case is different, as the Senate is not controlled by an opposition party now, as it was then. The left is not convinced.

One speaker declared that her organization and its allies would do whatever it takes to keep the Senate from holding hearings on a new Trump nominee.

“Before we have even had a chance to grieve for Justice Ginsburg, Donald Trump and Mitch McConnell are already scheming to fill her seat. This is everything we’ve been warning about since day one of Trump’s presidency,” Tabitha St. Bernard Jacobs, who works for the Women’s March, said. “The best way to honor Ruth Bader Ginsburg is to stop Mitch McConnell and Trump from stealing her seat,” she said.

Jacobs and many other speakers noted it was Ginsburg’s dying wish that her seat not be filled until another administration is sworn in.

Is Our Democracy at Stake, or Just Left-Wing Policies?

“Our very democracy is on the line,” Warren said in her speech. Neera Tanden, CEO of the Center for American Progress, also claimed that allowing Trump and McConnell to pick the next justice would undermine democracy, even though both Trump and McConnell are democratically elected officials with the legal power to appoint and confirm justices.

Leah Greenberg of the Indivisible Project similarly warned, “The future of our democracy is at stake, from the Affordable Care Act to voting rights to LGBT rights, to the basic tenets of our democracy.” She asked the crowd, “Are we going to let them force through a nominee while an election is literally happening? Are we doing to let Mitch McConnell and Donald Trump decide who sits in Justice Ginsburg’s seat? Are we going to… let these Republicans rubber-stamp another right-wing hack?”

Those I spoke with in the crowd echoed these sentiments. Diane Green told me that allowing Trump to nominate another justice would undermine democracy by causing many to lose trust in the Supreme Court. She said that Trump nominating a justice before the election is cheating. “If the process is not fair then we can’t trust it, and if we can’t trust [the process] then we don’t have the basis for a democracy,” she said. For the left, every lost election now leads to a regime crisis. To them, losing the presidency or a majority in the Senate or on the Supreme Court means there must be something wrong with our system. As one speaker said, “If they don’t want to play by the rules, then we will change the rules.” This was the same problem in the South after the election of President Abraham Lincoln.

So perhaps the left is correct. Our democracy is at stake—not from President Trump nominating another justice, but from the left being unable to accept the outcome of an election. Both Trump and McConnell are exactly fulfilling their Article I and Article II constitutional powers in nominating and confirming a Supreme Court nominee. McConnell’s decision not to do so in 2016 was a political move that was well within his constitutional right.

The left is saying that if Trump and McConnell succeed, the left will destroy our democracy. Their cries are not a warning, but a threat.

Left Created a Frankenstein They No Longer Control

Since the Warren Court, the left has elevated the importance of the Supreme Court by relying on courts for legislation instead of Congress. It is also the left that has deferred to the courts during battles between the executive and legislative branches. Further, it is the left that has looked to the courts to implement their policy goals when they failed to convince a majority of Americans to vote for these goals.

Now, with President Trump on the cusp of selecting his third Supreme Court justice, who will likely change the balance of the Supreme Court for a generation, the left is panicking. Liberals now realize they have created a Frankenstein monster that they may no longer be able to control.

The left will likely choose between two strategies going forward: either continue to hold the court as the supreme legislative body of the land or delegitimize it. Their choice will likely rest on how plausible they believe it will be to eventually pack the courts.

While the number of Supreme Court justices has been set at nine for more than a century, the Constitution does not stipulate the number. Congress has the power to decide. If Joe Biden is elected president and Democrats win enough seats in the House and Senate, this could be the left’s strategy.

However, in the absence of a Biden win or congressional approval, the left may very well determine that the Supreme Court will no longer be their go-to for legislative action. They may then seek to delegitimize the institution as un-democratic.

Ginsburg is lauded by the left especially for her fight to protect abortion. According to Time, Ginsburg broke precedent in her confirmation hearing by strongly endorsing abortion.

Her career on the bench proved she was a woman of her word. In 2016 Ginsburg voted to overturn a Texas law that required abortionists to have hospital admitting privileges. In March of this year, Ginsburg argued against a similar Louisiana law. In July, she and Sonia Sotomayor were the only two justices to vote against companies that sought religious exemptions from paying for abortifacients through health insurance. Prior to the vigil, a small group of pro-life advocates assembled in front of the Supreme Court. One preached and two others held signs showing aborted fetuses. The group was quickly surrounded by mourners. One tried blocking the signs with one of her own, another woman wearing a shirt that said “F-CK Trump” held her middle fingers up in front of the group for several minutes, and a man dressed in all black with a shirt that read “I am Jesus Christ” used a megaphone to talk over the pro-life advocates.

Many in the crowd held purple signs that said, “Reproductive freedom for all.” One young woman who spoke at the rally praised Planned Parenthood for helping her obtain an abortion when no one else would. She credited that decision with helping her get where she is today.

“What’s at stake is clear. If Trump and the Republicans are allowed to appoint another justice, Roe v. Wade will be overturned,” Jacobs claimed. Kavanaugh 2.0 Is Going to Be Far Worse

Ginsburg was certainly an inspiring figure for those who desire to perpetuate her legacy. Many at the event sincerely mourned her passing, often having to wipe tears away as they laid candles and flowers at the steps of the Supreme Court building. Known for her judicial temperament, Ginsburg’s apparent last wish might be one of the most calculated political moves ever made by someone on her death bed. It has already reignited those who fought so hard against Kavanaugh.

As hard as that battle was, this one will be worse. Before leftist leaders had even blown out their vigil candles, they began drawing up battle plans to defeat Trump’s nominee, whoever it is.

We must not let another nominee go through what Kavanaugh did. We must be on the offensive. The left has already stated that they will fight with everything they have, so let the right fight with the same dedication. The left has nothing to lose, and we have everything to gain.

Posted by theodore miraldi at 7:08 PM