Is America on the Verge of Substituting Woke SOCIALISM for Judeo-Christian Ethics? 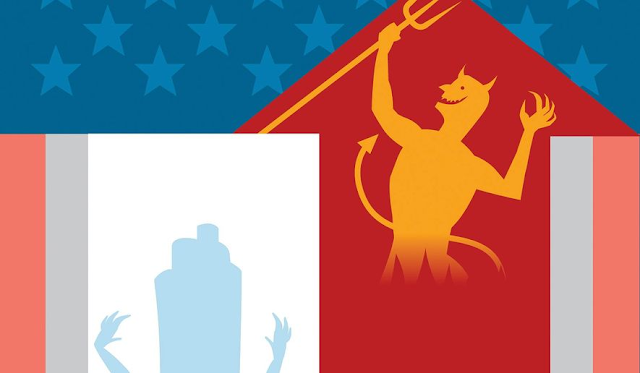 Wokeness is a great challenge to America’s ideals.

Is our nation in the process of substituting a new morality, wokeness, which posits race as the principal determinant of economic and societal relationships, for Judeo-Christian ethics? At hand is a supercritical point that foretells a change of state in the nation’s mind.

The dual nature of America’s citizenry has strengthened our republic, for our material and spiritual selves each are a counterweight to the excesses of the other. Marxist ideology, which asserts that we are solely materialistic, seeks to erase our spiritual dimension. Through the writings of Antonio Gramsci, the Italian Marxist, the economic class struggle, which stipulates that economic freedom is not freedom at all, but enslavement, was transmuted into a broader front opposing cultural hegemony.

The antidote to cultural hegemony was to be provided by the creation of an alternative culture to displace Western thought. To dominate, this new epoch would substitute its morality to that provided by religion. To do so, a lever was needed. Building on Gramsci’s ideas, race became that lever.

Wokeness is a means to an end, which is power. With religion under attack, wokeness is employed as a mechanism to appeal to a noble and universal goal: racial equality. This is the Trojan Horse to effect revolution.

To understand the nature of the evil that has brought the hearts of many of our nation’s cities to ruin, we must examine the hatred demonstrated by Marxist-Leninists. Perceived abominations are mixed with the Communist ethos of the meaninglessness of right and wrong to produce intense loathing. This wrath, which ordained the execution of the Romanov family in 1918, drives the whirlwind of Portland’s revolutionaries and their academic apologists. Substituting instances of police brutality and error for the deprivations common in Russia under czarist rule, woke radicals seek retribution.

In the case of Imperial Russia, the magnitude of such darkness demanded the murder of not only the czar and the czarina, but all their children. Fueled by Marxist precepts that admit no final judgment, these were burning detestations, indeed. Unfortunately, as with Russia’s history, America’s past provides the canvas on which radicals hope to manufacture our country’s end, though our nation has for decades sought the eradication of racial discrimination and its resultant inequities.

To the left, this war can only be won if the foundations and edifices of Western thought are eviscerated through the destruction of those nations that manifest Western ideals. Seen through such an ideological mirror, America is a proxy for Nazi Germany, which, before Hitler’s rise, was the great exemplar of Western culture.

What substrate permits these revolutionaries to act? The infamous British occultist Aleister Crowley, who committed horrendous acts of blasphemy and blood sacrifice, defined the governing principle of his anti-religion, Thelema, this way, “Do what thou wilt shall be the whole of the Law.”

This tenet means do as you like, for there are no higher laws, nor authority, other than one’s self. The Jew, the Muslim and the Christian share the belief that true freedom lies not in being unlimited, and thus suffering no constraint, but by being limited by God’s laws so that one may be adorned in at least part of the raiment offered to each of us by God.

How then has such thought permeated our society? It has progressed through journalism, the entertainment industry, academe and government. To consider just the news business, the route is clear. Walter Duranty, who served as the Moscow bureau chief of The New York Times Walter Duranty, the recipient of the 1932 Pulitzer Prize for his many dispatches concerning the USSR, forgot a small matter, the Holodomor.

Created by a Soviet decree mandating the collectivization of farms and the elimination of peasant farmers, the Holodomor, between 1932 and 1933, resulted in the deaths by starvation of at least 4 million Ukrainians as well as 6 million other mortalities as the consequence of birth defects.

Such was the catastrophe that photos exist of starving Ukrainians standing beside their only crop: human body parts, arrayed on shambles, ready for purchase. The Kremlin did its part to commemorate this, for it ordered posters warning Ukrainians not to eat their children.

This excretion was ushered into this world by communism, but Walter Duranty was there, why did he not report it in his dispatches to The New York Times? Why did he deny the existence of this state-perpetrated famine, for numerous, contemporaneous sources confirm that he misreported its dimension? The core of the answer lies not in Moscow, nor in the Ukraine, but in Paris, for it was in Paris that Duranty, years earlier, formed an intense relationship with Aleister Crowley.

Crowley and Duranty sought to bring forth the ancient gods Mercury and Jupiter. This they did through their course of “Paris Working”: the performance of ancient and made-up rituals along with drug-induced euphoric episodes, laced with evocations and debasements.

Whether Duranty abstained from reporting the Holodomor due to Soviet blackmail or because he was the recipient of largesse from Stalin, the cause of his subterfuge was the same, yet he became an angel of American journalism for decades. As we consider the damage wrought by the idol of wokeness, let us also understand that it is reported by those who may be broken. Judeo-Christian thought has been the fountainhead of the greatest period of prosperity in history. To undo it is to do irreparable damage to our world.

• Richard B. Levine, who served on Ronald Reagan’s NSC Staff under four assistants to the president for national security affairs and was its director for policy development, is the co-author of “America’s #1 Adversary: And What We Must Do About It—Now!”