Is it Time for a ‘WHIFF OF GRAPESHOT’ to Bring the RIOTERS to Heel? 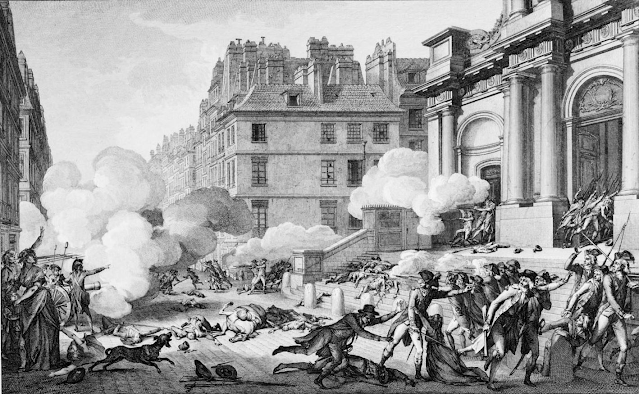 The image for this post (which appears on social media) shows the 13 Vendémiaire, Year 4 (1795) when Napoleon made his name
by giving a “whiff of grapeshot” to the counterrevolutionaries.

Black Lives Matter and Antifa have a pattern: Whenever they don’t like something, they violently take to the streets to show their displeasure. Significantly, their protests are not localized. In cities across America, residents are being trained that, if they cross the mob, the mob will destroy them. Over five years, with accelerated speed in 2020, state and urban governments across America, by embracing the mob’s “defund the police” policy, have ceded their streets to the mob. This cannot continue. It is destabilizing America, especially now that the mob makes implicit and explicit threats of future violence if Americans don’t vote for Biden, the mob’s preferred candidate.

In times past, the great mass of a polity’s citizens had no say in their governance. Throughout the world, most political systems were tyrannical, with the tyrant being a monarch or theocracy – or, in many cases, a fusion of both. These bodies imposed their will on the people, dictating the all-important taxes, as well as imposing rules about property ownership, war service, rights to land and water, etc.

A wise ruling class made sure that the voiceless people were at least minimally happy. Corrupt, foolish, or evil ruling classes did not, instead controlling the people through force. It often worked because people who are not trained to fight will suffer tremendous pain and insults if they think they will achieve a stability that looks like peace.

When the people could no longer handle the tyranny under which they lived, they resorted to the only weapon they had: The mob. Roman rulers feared mob rule and tried to prevent it with Rome’s famous “bread and circuses.” In France, during the 100 Years War, downtrodden peasants formed the Jacquerie and slaughtered the rich indiscriminately. The Peasants’ Revolt in 1380s England terrified the ruling class. Mobs took down nobles and kings, destroyed faiths, and welcomed socialism.

Before 2020 in America, what the mobs had in common was that they were voiceless. They had no control over the government policies affecting their lives.

The ballot box was seen as an end to the mob. If people could have a say in government, they would not need to take to the streets. The Founders, wise men, recognized that direct democracy would create a different type of mob, so they created a system of representative democracy that was intended to keep the mob away from the levers of power.

We’d reached an apex of political sophistication in which, through the ballot box, every adult could have a voice in government. That voice, combined with the absolute right to peaceable assembly, should have meant that America never saw another mob. Black Lives Matter and Antifa, therefore, represent a regression in American politics.

So, here we are in 2020, and the mob has done something never seen before in history: It has allied itself with the ruling class against the middle. The ruling class wants absolute power, unhindered by our representative democracy. The members of the mob want their spoils – the emotional gratification that comes from wreaking havoc and acquiring the power of fear over others, and the practical benefits of looting.

They’re helped by knowing that prosecutors will not stop them. There are no barriers to the mob. For example, the police in Seattle, no matter how valiant, are useless riding around on their little bikes:

It’s Cloward-Piven on steroids, with the ruling class and the mob allied to destroy America’s political system and civil stability in order to break the system, paving the way for a Marxist government, ruled by technocrats (who, once they control the military, will brutally suppress the mob). This pattern must end. No country, even one as resilient as American, can survive a sustained attack on her institutions.

What may stop the big tech oligarchs and their Hollywood acolytes is that Americans are arming as never before. That’s Leftist prosecutors are trying to demoralize armed Americans by prosecuting people who manifestly acted in self-defense, people such as Kyle Rittenhouse, George Zimmerman, Garrett Rolfe, the McCloskeys, and Jake Gardner (may he rest in peace).

At a certain point, though, people’s fear of the mob will override their fear of activist prosecutors. An armed, angry, and dangerously frightened citizen army will arise, and then the left will have the civil war it’s long sought, for it’s confident of victory.

Possibly, the only thing between America and a civil war (which will leave us looking like Syria) may be for the police and military to stop being reactive and start being proactive. The “whiff of grapeshot” – the quick, brutal attack on an attacking mob – could be the only thing that stops the left’s crazed desire to “burn it all down.”