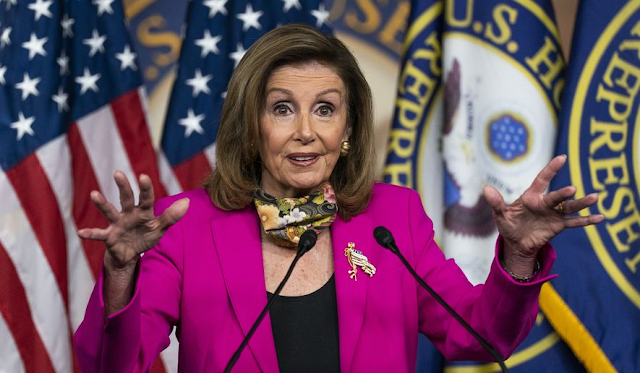 House Speaker Nancy Pelosi on Sunday would not rule out launching impeachment proceedings to try to block President Trump and Senate Republicans from quickly filling the vacancy left on the Supreme Court by the death of Justice Ruth Bader Ginsburg.

“We have our options. We have arrows in our quiver that I’m not about to discuss right now,” the California Democrat said on ABC’s “This Week.”

Host George Stephanopoulos had asked her about the possibility of launching impeachment proceedings against Mr. Trump or Attorney General William P. Barr in the post-election lame-duck session of Congress as a way to stall a high court confirmation process.

“We take an oath to protect and defend the Constitution of the United States. We have a responsibility to meet the needs of the American people,” Mrs. Pelosi said. “When we weigh the equities, protecting our democracy requires us to use every arrow in our quiver.”

Mr. Trump and Senate Majority Leader Mitch McConnell have indicated they intend to move quickly to fill the vacancy.

Justice Ginsburg died Friday of pancreatic cancer at the age of 87.

Democrats say moving before voters have a chance to weigh in via the Nov. 3 election would violate Mr. McConnell’s own standard from 2016, when he blocked hearings and votes on Judge Merrick Garland, who former President Barack Obama nominated to the high court in March 2016.

Mr. McConnell says the situation was different then because the White House and the U.S. Senate were controlled by different parties.

The Democrat-led House already impeached Mr. Trump in December, accusing him of improperly strong-arming Ukraine to dig up dirt on Joseph R. Biden, who is now the Democratic presidential nominee.

The GOP-led Senate voted to acquit the president earlier this year.

Posted by theodore miraldi at 11:17 AM