Refugees From TYRANNY Agree: Authoritarian Threat in America Now is From the LEFT 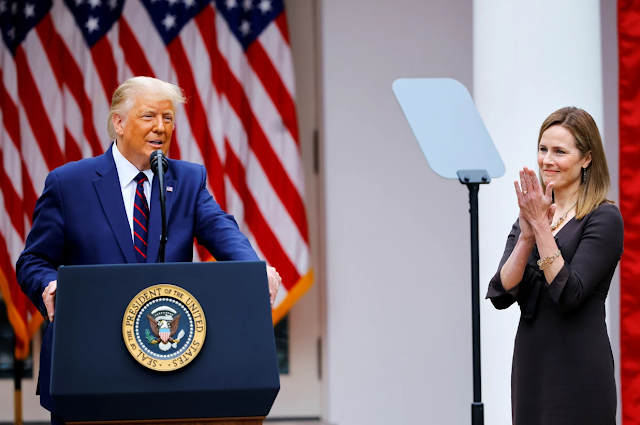 Federal judge Amy Coney Barrett's Catholic faith is being attacked by some on the left. Reuters

Left-wing hysterics with major media platforms have for years been shrieking that President Trump is about to install a fascist dictatorship any minute. Meanwhile, unheard immigrants from the Soviet bloc warn that totalitarian tyranny is actually emerging from the left — and Americans are too naive to see it coming.

Sounds crazy, right? I thought so when I first heard it from an elderly woman who spent six years as a political prisoner under Czechoslovakia’s Marxist regime. But the more I talked to people like her, the more I came to see them as canaries in a coal mine. Their message is the same: What’s happening in America today reminds me of life under Communism.

It’s hard for Americans to see it, in part because our idea of totalitarianism comes from Orwell’s “1984” and Solzhenitsyn’s “The Gulag Archipelago.” But Stalinism 2.0 is not what the old dissidents predict. They point out that the left in power is achieving totalitarian goals — not simply obedience, but the internalization of left-wing ideology by much softer means.

Who needs the gulag when you can compel obedience by threatening someone’s job or destroy her reputation on social media? Why bother with the secret police when the masses already hand over ­detailed personal information to Google and other woke capitalist behemoths via smartphones and laptops?

The coming soft totalitarianism may well unify the government, major corporations, the media and leading institutions of civil society, which will collaborate to suppress dissent and coerce conformity. The United States could one day have its own version of China’s high-tech social credit system. Those who resisted Soviet Communism urge us to prepare now for resistance, while we still can.

The shocking truth is, we Americans are living in a pre-totalitarian situation. In 1951, Hannah Arendt published her landmark study “The Origins of Totalitarianism,” in which she studied the conditions that led both Soviet Russia and Nazi Germany to embrace totalitarianism. It makes for sobering reading in our present circumstances. Among the signs:

Loneliness and social atomization: Totalitarian movements, said Arendt, are “mass organizations of atomized, isolated individuals.” And “what prepares men for totalitarian domination in the non-totalitarian world is the fact that loneliness, once a borderline experience usually suffered in certain marginal social conditions like old age, has become an everyday experience of the ever-growing masses of our century.”

Loss of faith in hierarchies and institutions: Loneliness is politically significant because it leaves the masses hungry for a sense of community. In a healthy society, an individual could find fellowship and common purpose through the institutions of civil society: political parties, churches, civic clubs, sports leagues and the like. In contemporary America, these have largely withered.

Transgressiveness for its own sake: In both pre-Bolshevik Russia and pre-Nazi Germany, elites reveled in acts of rebellion that made fun of traditions and standards, moral and otherwise. They immersed themselves in baseness and called it “liberation.” They also took pleasure in overturning institutions and established practices for the sake of outsiders.

Wrote Arendt: “The members of the elite did not object at all to paying a price, the destruction of civilization, for the fun of seeing how those who had been excluded unjustly in the past forced their way into it.” Her words apply with eerie prescience to the Black Lives Matter upheaval in the streets and in elite institutions.

Susceptibility to propaganda and ideology: In pre-totalitarian nations, wrote Arendt, hating “respectable society” was so narcotic that elites were willing to accept “monstrous forgeries in historiography” for the sake of striking back at those who, in their view, had “excluded the underprivileged and oppressed from the memory of mankind.” It’s like Arendt anticipated The New York Times’ fraudulent 1619 Project.

America is sleepwalking into soft totalitarianism. If we ignore the prophetic voices of those who survived Communism, we deserve what we get. The best defense ordinary people can mount, said Solzhenitsyn, is to refuse to stay silent in the face of ideological lies. If we hope to defend our freedom, we have to start by rejecting a comforting lie we tell ourselves: that it can’t happen here.

Rod Dreher is author of the just-published “Live Not By Lies: A Manual for Christian Dissidents.”

Posted by theodore miraldi at 12:32 PM