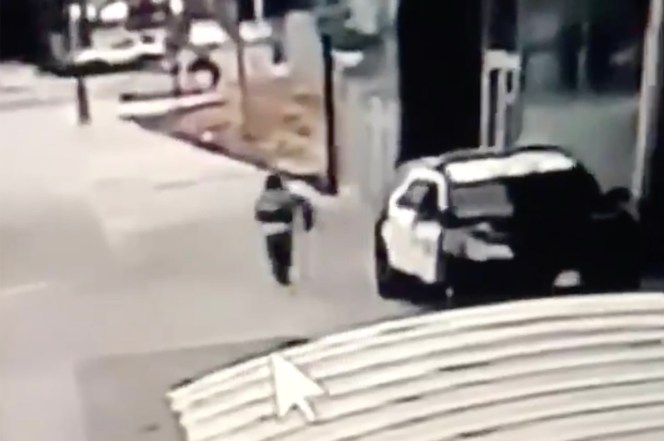 Anti-police protesters descended on a Los Angeles hospital where two deputies were fighting for their lives after being ambushed and shot in the head — chanting, “we hope they die,” according to officials.
The sick chants came outside as the two rookie officers — one a 31-year-old mother of a six year-old boy — were still fighting for their lives after being “critically injured” as they sat in their patrol car in the caught-on-camera ambush in Compton.
“To the protesters blocking the entrance & exit of the HOSPITAL EMERGENCY ROOM yelling ‘We hope they die’ referring to 2 LA Sheriff’s ambushed today in #Compton: DO NOT BLOCK EMERGENCY ENTRIES & EXITS TO THE HOSPITAL,” Los Angeles County Sheriff’s Department tweeted early Sunday.
“People’s lives are at stake when ambulances can’t get through.”
Officers branded the protest an unlawful assembly, and arrested two people who refused to move — including a reporter without credentials who “ran towards the deputies, ignored repeated commands to stay back” and “interfered with the arrest,” the department said.

LAist identified the reporter as its own Josie Huang, who said she was released early Sunday and would address the sheriff’s office claims soon.
The ambushed cops were not named, but were revealed to be officers who had served just over a year in the department. One was a 31-year-old female officer, the other a 24-year-old male, the Los Angeles Times said.
They were “ambushed by a gunman in a cowardly fashion,” Sheriff Alex Villanueva said at a press conference, calling it “a somber reminder that this is a dangerous job.”
“Every week across the nation someone is losing their life in the line of duty,” he said. “This is just another grim reminder of that.”
Assemblyman Reggie Jones-Sawyer caught it an “unprovoked cowardly act.”
“We must come together and pray for the officers because they are heroes,” he said at the same press conference.
LAPD Chief Michael Moore tweeted his prayers that the “two guardians” survive.
“I recognize and acknowledge we live in troubled times. But we must as a community work thru our differences while loudly and resoundly condemn violence,” he tweeted. “Blessed are the Peacemakers.”
The FBI is assisting in the investigation. There have yet to be any arrests and it was not immediately clear if any suspects have been identified, the L.A. Times said.
Source>https://nypost.com/2020/09/13/la-hospital-treating-deputies-inundated-by-protesters/
Posted by theodore miraldi at 10:56 AM