Leftists are outing themselves as racists complicit in perpetuating systems of oppression. Maybe it's time we started believing them. 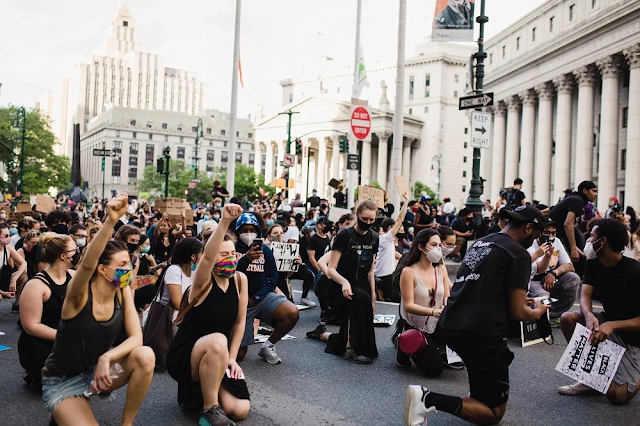 
Black Lives Matter is the operational arm of “critical race theory,” the postmodern philosophy of “critical theory” applied to race. Critical theory suffers an inescapable epistemological conundrum. It’s the Liar’s Paradox: If a Cretan says all Cretans are liars, is he to be believed?

Or, in the case of critical theory: If a theory denies objective or universal truths, claiming that the powers-that-be subconsciously construct “reality” by projecting their will to power onto the transcendent screen of axiomatic certainty, all to perpetuate structures of power in which they’re on top, then does not critical theory itself fall under that same dynamic?

Put another way, how on earth do critical theorists exempt themselves from what they say are forces at work determining what everyone else does? How on earth is critical theory itself not a quest for power by those who came up with the theory?

So, who came up with critical theory? You got it: white men. Or do you not recognize in Immanuel Kant, Karl Marx, Ludwig Wittgenstein, Michel Foucault, Jean Baudrillard, Ferdinand de Saussure, George Herbert Mead, Noam Chomsky, Hans-Georg Gadamer, Roland Barthes, and Jacques Derrida, a whiteness the lilies themselves would envy. Should we not add critical theory to the list of oppressive systems dead white men came up with to advance white power?

Doesn’t the current system of “white privilege” need its black capitalists, black police officers, and black Republicans so whites can feel good about the system? Why wouldn’t the same dynamic be at work with critical theory regarding critical race theory?

Or, put in the terms of critical race theory, white men are the “epistemological plantation masters” for the obedient “house negroes” coming up with critical race theory. These ideas didn’t originate in Nigeria — which might explain why Nigerians love America, love President Trump, and want to move here.

Leftism Needs to Keep Blacks Down

According to its own terms, critical race theory must be racist. Furthermore, Black Lives Matter, the political movement based on its theories, must also be racist—and not black racism, but white racism. At a deep, subconscious level, it serves the purpose of advancing and enhancing “white privilege.”

Ruminate on the sad indisputability of this statement for a moment: Something in the leftists’ minds needs to keep minorities from finding hope and advancing in existent American “systems.”

Meanwhile, of necessity by the terms of critical race theory, the flip side of this dynamic is going on. Leftists feel the new world order will advance their wills to power. Now, at the subconscious level, leftists don’t know they’re doing this. They may reject they’re doing this — because they have white fragility. Or, more accurately, they are projecting onto others what they themselves are.

They are truly the racists, as they always have been. And here’s sort of an obvious point: They’re telling everyone this now. This is exactly what they’re currently saying: “We’re all racist.” To which I say, “Speak for yourself, but interesting what you’re saying.”

Consider: ten years from now, does anyone doubt things will be essentially the same as they are now, with some tweaks here and there in the bureaucratic apparatus of civil rights law gumming everything up (particularly for minority entrepreneurs at the lower rungs of the ladder to success), but by and large the same disparities between black and white will continue?

Or, will things, unfortunately, become worse? If things stay on the current track, urban areas will be gutted by riots, black-on-black crime will continue to surge, and as the victimology inherent in critical race theory convinces black Americans they have no hope of advancement in our nation, despair and poverty will increase as well.

Whites, meanwhile, will have felt cathartically purified with their “We Believe” signs proudly displayed behind their white picket fences. A host of rich, white graduates of some “studies” degree — who, normally, would have no power, to say nothing of a job, under healthy circumstances — will populate government bureaucracies and human resources departments with comfortable six-figure incomes.

Who do you suppose will benefit most from that new regime of civil rights law? Sounds like a nice system if you’re an upper-middle-class white leftist. That’s because it is. It’s exactly as critical race theory proposes. “Whites gonna white,” says the theory, so how can the theory itself be anything other than the latest vehicle for whites to empower themselves?

The evidence bears this out. The left has had decades of power and control of our cities, academia, and media. They’ve had ample opportunities to demonstrate the wonders of their ideas. Yet all we see is the perpetuation of the very things they decry, while they gain more and more power.

For decades, we’ve been told all the violence and ugliness spawned by leftism are merely the birth pangs of a new system. Well, how long do you leftists need to give birth? Enough already! Give us a taste of the glories of the New World in your urban microcosms!

Or maybe, as Maya Angelou said, “When someone shows you who he is, believe him.” Leftists are outing themselves as racists complicit in perpetuating systems of oppression. Maybe we should believe them.

The Dangers of Critical Race Theory

Perhaps an honest appraisal of critical race theory is in order, so we can liberate ourselves from the sticky epistemological tentacles of a nonsensical theory. Unfortunately, writ into the DNA of its axioms is the deconstruction of rational dialogue — that too, you see, is just another tool of white privilege. Leftism can’t have room for questions.

We could extol what is by and large a just system for the advancement of anyone who applies himself and works hard — the American system. Individuals in that system could be spending their days in hope and personal achievement using the liberties available to them in this country. Or we could have a healthy discussion about race as it relates to traditional American principles.

Yet instead, we’ll just have to wait for the virus of critical race theory to work its nihilistic destruction on the black community, while whites sit on the sidelines with their shut, masked mouths, on bended knee, advancing their privilege.