THIS SHOULD BE INSULTING TO EVERYONE!! 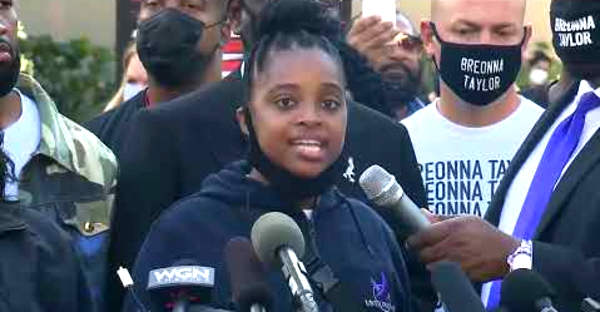 Surrounded by attorneys and the family of Breonna Taylor, Tamika Mallory, a co-organizer of the 2017 Women's March, lit into Kentucky Attorney General Daniel Cameron, who is black, calling him "no different than the sellout negroes that sold our people into slavery."

Mallory, introduced by attorney Benjamin Crump at a news conference Friday, falsely claimed it was "Daniel Cameron's decision" not to press charges against police officers in the death of Taylor on March 13. In fact, it was a citizen grand jury that came to that determination after examining evidence that conflicted with the Black Lives Matter narrative promoted over the past six months.

Mallory, 40, said that as she heard Cameron saying he's a black man, she thought of the slave ships "with our people on them" four centuries ago "and how there were black men that were responsible for bringing our people over here."

"Daniel Cameron is no different than the sellout negroes that sold our people into slavery and helped white man capture our people and to abuse them and to traffic them while our women were raped, while our men were raped by savages," she said to applause and shouts of "Talk to him."

"That is who you are, Daniel Cameron, you are a coward, you are a sellout and you were used by the system to harm your own mama, your own black mama," said Mallory.

On Thursday, as WND reported, House Speaker Nancy Pelosi said Taylor was "murdered by police" and that the U.S. has "two systems of justice."

Mallory, after she was introduced by lawyer Benjamin Crump, read from the Fraternal Order of Police's endorsement of Cameron, calling the FOP "one of the most racist organizations that exists in America."

Mallory said it's a "lie" that Cameron is "here to protect citizens and to make the state of Kentucky safer."

"It didn't matter to him one bit that those same officers could have ran into his mama's, his black mama's house, and shot her to death," she said.

"He's more committed to the white supremacy that he's upholding," she said of the AG.

In 2018, Mallory's association with Nation of Islam leader Louis Farrakhan prompted calls for her resignation from the 2019 Women's March. She left the organization in September 2019.

Crump has been at the forefront of the movement claiming law enforcement in the United States is plagued by "systemic racism," beginning with his representation of the family of Trayvon Martin. A jury found George Zimmerman acted in self-defense in the death of Martin, and compelling evidence emerged recently the prosecution used a fraudulent key witness.

That case, nevertheless, launched the Black Lives Matter movement, which picked up steam in the 2014 Ferguson, Missouri, case of Michael Brown, whose family hired Crump. A jury and the Justice Department led by Barack Obama and Eric Holder found the officer acted in self defense and the iconic "Hands up don't shoot" didn't happen. A third investigation, requested by the Brown family, came to the same conclusion this year.

This year Crump represented the families of George Floyd and Jacob Blake, and those cases, still underway, aren't as simple as they seemed to be at first.

In the case of Floyd, the former head of the Philadelphia DA's team prosecuting accusations of police brutality, citing body cam footage and the autopsy and toxicology reports, has concluded the officers did nothing wrong, adhering to their training. Floyd had three times the lethal dose of fentanyl in his blood and, suffering from excited delirium, begged to be put on the ground while officers tried to get him into the squad car. The autopsy showed the police department-certified neck restraint used on him was not the cause of death.

Videos released after the initial video showing Blake being shot in the back, showed him wrestling with officers and refusing their order to drop a knife. Blake had a warrant out for arrest for sexually assaulting the woman who made the 911 call that led to the Aug. 23 confrontation in Kenosha, Wisconsin.

Cameron said Wednesday that according to Kentucky law, the use of force by Officers Jonathan Mattingly and Myles Cosgrove "was justified to protect themselves." The only charges were three counts of wanton endangerment against fired Officer Brett Hankison for shooting into a home next to Taylor's with people inside.

Taylor's boyfriend, Kenneth Walker, admits he fired first at police, who contend they knocked at the door of the apartment and announced themselves before breaking in. An independent witness confirmed that the police knocked and announced themselves. Walker claims he heard the knocking but didn't hear police announce themselves and thought it might be Taylor's former boyfriend. Taylor was not asleep when she was shot, as was widely claimed, but was standing in the hallway of the dark apartment with Walker while he was firing at the officers.

Mattingly and Cosgrove returned fire after Mattingly was struck by a bullet that, according to forensics, came from Walker's weapon.

It has also been claimed that the officers were at the wrong apartment and that Taylor was not suspected of any involvement in drug dealing. The officers, in fact, had a "no knock warrant" to search Taylor's apartment. And they had evidence of her participation in a drug ring with the former boyfriend, Jamarcus Glover.

The Louisville Courier Journal reported in August that an internal police department report, corroborated by jail phone recordings and other documents the paper obtained, show Glover was the main target in a drug probe that prompted police to request the search warrant for Taylor's apartment.

Police had evidence packages were being delivered to Taylor's apartment that Glover picked up. And a recorded jail call made by Glover on the same day that Taylor was shot names her as the person who was "handling" his money.

No money was found at her residence during the police search, the paper said.

Other evidence of Taylor's involvement included a call Glover made to her from jail on Jan. 3 in which he asked her to contact one of his co-defendants to get bail money.

Taylor said the associate was "already at the trap," a slang term for a house used for drug trafficking. Glover told her to be on standby to pick him up if he made bail.

"Love you," he said as he ended the call.

The Courier Journal reported there were several instances in which Taylor posted bond for Glover and another man involved in the case, Darreal Forest.

In the Jan. 3 call, Glover asked Taylor to contact a man named Adrian Walker — no relation to Kenneth Walker — to round up bail money.

After Taylor's death on March 13, according to the internal report, Glover spoke by phone with Adrian Walker, expressing his grief.

Posted by theodore miraldi at 12:19 PM