A Serious Debate that Leaves Biden with Lingering BRUISES

Will allegations of Biden family corruption ever be properly scrutinized? 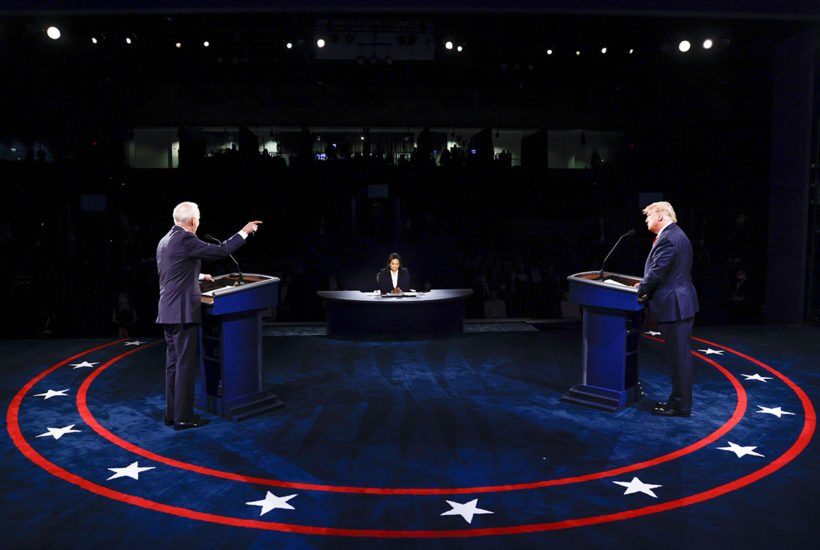 
Thursday night’s debate was far calmer and more substantive than the street brawl that preceded it. If we score it like a boxing match, it was pretty close. Both Donald Trump and Joe Biden landed punches. Neither had to be carried out on a stretcher.

But that’s the wrong way to look at it. It matters, obviously, that neither candidate won a decisive victory and that Trump needed one more because he’s trailing, according to polls. But the debate helped Trump in another way. Biden said things he will regret. Time and again, he made false or misleading claims and politically-questionable promises. Three stand out: ‘super predators’, fracking and family corruption.

Fracking is important because it has led to much lower energy prices and freed America from foreign oil supplies. Whether to continue fracking or significantly reduce it is part of a larger debate about fossil fuels. How much are Americans willing to pay to move away from cheap hydrocarbons? How quickly they wish to do it? On the debate stage, Joe said he has never wanted to ban fracking. But that’s ‘General Election Joe.’ Last winter, ‘Democratic Primary Joe’ had a very different position. His running mate Kamala Harris was even more emphatic. Even in this debate, Biden acknowledged he wants to ban fracking on federal lands.

Biden and Trump differ sharply on America’s energy future, and those differences came through in the debate. Biden made aggressive statements supporting alternative energy, pledging to gradually phase out the entire oil and gas industry and add thousands of new, high-paying jobs as he did so. There are really two issues here. One is whether voters have a clear sense of what Biden will do and how much it will cost. The other is how these promises will play in states that rely on energy production (such as Texas, Pennsylvania and Ohio) or on energy-intensive industries (Michigan). How Pennsylvania voters, in particular, see Biden’s energy policies is crucial because, if Trump loses the state, he’ll have a very hard time winning reelection. That’s why Trump was so quick to jump on Biden’s ‘green energy’ promises during the debate. He thinks Biden is hurting himself in Pennsylvania and Ohio.

Second, Biden denied he ever used the term ‘super predators’, a not-so-veiled reference to black street gangs. He’s right, sort of. Hillary said it in 1996. But in 1993, as Biden was trying to pass a major crime bill, he spoke of ‘predators on our streets…literally without any conscience developing.’ As Joe himself might put it, ‘Just play it for yourself on the Victrola.’ In 1998, he told a convention there were 100,000 juvenile ‘predators’, arrested for violent crimes, who ‘warrant exceptionally, exceptionally tough treatment’. He later came to regret that language and the crime bill, which led to mass incarceration of young black men. Trump has attacked him on it and emphasized his own success in passing criminal-reform legislation. Trump also spoke of his long-term funding for historically black colleges, the creation of ‘enterprise zones’ in minority areas, and especially the record-low unemployment among minorities before the pandemic. It’s all part of his concerted effort to win African American votes. Republicans seldom win very many, but even small gains could help in the swing states of Ohio, Pennsylvania, Michigan, Wisconsin, Minnesota and Florida. Biden responded by calling Trump a racist, saying he used dog-whistle language ‘as big as a foghorn’.

The biggest breaking story of the past week — Hunter Biden’s corrupt entanglements with foreign businesses and his father’s role, if any — received far too little attention during the debate. The mainstream media, Big Tech and the Biden campaign would say it didn’t deserve much. They certainly haven’t given it any. But Biden did, at least, make a clear, blunt statement on the issue. He denied ever taking a penny from foreign sources. As a debater, he did a fine job of turning the issue around and attacking Trump over a bank account in China. But Biden’s debate performance and help from every media organization may not be enough to kill the corruption issue.


The accusations of Biden family corruption are piling up, and they are getting verification from multiple sources, willing to go on the record. Biden’s response, that the charges are nothing more than Russian lies, is crumbling. Granted, the mainstream media have not reported the story and Big Tech social-media platforms have smothered circulation of any stories that did appear. But if these allegations can be verified and gain traction, then they are incredibly damaging. After all, Biden is running as the candidate of integrity and honor, as he emphasized during the debate.

The main allegations are that the Biden family got rich on pay-to-play schemes. They monetized Joe’s power as the sitting vice president and, after he left office, his strong position to win the 2020 Democratic nomination. The allegations, so far, have not been that Joe was paid directly, although notes about one deal allocated 10 percent to be held by ‘H for the Big Guy’, alongside slices for ‘H’ (his son, Hunter) and ‘JB’ (Joe’s brother, Jim). The principal allegations are that the family members got rich off Joe’s position, and did so with his knowledge and help. That is far from proven, but more evidence has been coming out each day. The more directly Joe Biden is implicated in these schemes, the more damaging it is politically.

Joe and his campaign know that. For several years, he has flatly denied ever discussing Hunter’s business with him or knowing anything about it. Those claims are undermined by newly-emerging evidence. One is a cache of damaging emails found on Hunter Biden’s laptop computer, abandoned at a Delaware repair shop. Another is a separate cache of 26,000 emails involving Hunter’s dealings with a former business associate, Bevan Cooney, who is now serving time for fraud. The latest, which broke just before the debate, is perhaps the most damaging of all: first-hand testimony from Tony Bobulinski, another of Hunter’s business partners. Bobulinski says he met directly with Joe Biden to discuss some Chinese deals, which include companies with ties to the Communist party. He adds that Hunter told him and others that he always spoke with his father about these matters before making any moves. Bobulinski is now cooperating with Senate investigators, has offered to testify under oath, and has turned over three electronic devices with messages from Hunter than mention Joe’s involvement.

The New York Post broke the Delaware computer story on Wednesday October 14. The Biden campaign said nothing for over a week. They did not deny it. The compliant press corps didn’t ask, and Joe remained at home, without any public events. Eventually, he responded briefly to a reporter, saying the story was a ‘smear’. That’s not the same as saying the computer wasn’t Hunter’s or the emails were fake.

Biden’s denial received support from former Obama-era officials in the intelligence agencies, who said it all looked exactly like Russian disinformation. They offered no supporting evidence. They were refuted by Trump’s director of national intelligence, John Ratcliffe, who said the computer and information on it were not Russian disinformation. The FBI, no friend of Trump’s, confirmed they did not consider it foreign disinformation. During the Thursday debate, however, Joe Biden reasserted his claim that it was all a ‘smear’ and a ‘Russian hoax’. Trump taunted him, ‘Russia, Russia, Russia!’ and repeatedly asked about Hunter’s receipt of $3.5 million from the widow of Moscow’s mayor.

At that point, the moderator, NBC’s Kristen Welker, could have made a genuine contribution to public discourse and voters. She failed. She should have stepped in and said, ‘Mr Vice President, on this story, there are major differences between the two campaigns. Could you explain your position? Are you saying that the Delaware computer didn’t belong to your son or that the emails we have seen from it are fake? Are you saying that you did not meet with Burisma officials in the White House? Are you saying that you never met with Tony Bobulinski to discuss Chinese business ventures?’ She didn’t do that. She was determined to return to her set list of questions, which meant the corruption issue was never clearly dealt with. Both candidates should have been given an opportunity to make their case, not squelched by a moderator on autopilot.

If evidence from Bobulinski, the Delaware computer, or Cooney emails holds up, if anyone else comes forward with credible information, if the ‘Russia, Russia, Russia!’ claims continue to collapse, then Biden is in a very difficult position. Should he leave the basement or not? If he campaigns, some brave reporter might — gasp! — press him for serious answers. If he stays in the basement, as he did all this week, he looks like he’s hiding from scrutiny.

We don’t know which path he will choose, or what new information will come out, but on Thursday night, we did learn how Joe Biden intends to respond to allegations of corruption. He will strenuously deny them. The questions are whether those denials will hold up or, what’s just as good, be ignored by the media. If the accusation loses steam, then Joe can continue to focus on his strongest arguments: COVID, character, and healthcare.

Meanwhile, Trump will campaign non-stop, battering Joe on the scandals and hoping it doesn’t distract from his strongest argument for reelection: ‘I can bring the economy back, and Biden will kill it.’

We saw that choice on display Thursday night. And, unlike the first debate, we actually got to hear the arguments.