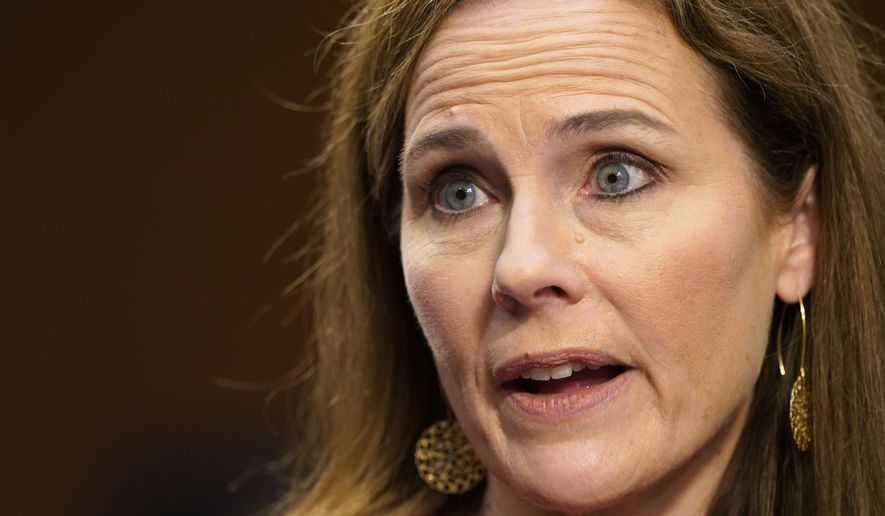 Anti-Trumpers are calling to impeach Supreme Court Justice Amy Coney Barrett less than 24 hours after she was confirmed, paving the way for Democratic presidential nominee Joseph R. Biden to add justices to the high court should he win in November.

Norman Ornstein, a political science scholar at the American Enterprise Institute, and Alexander Heffner, a PBS host, argued Justice Barrett should be “impeached promptly” if she doesn’t recuse herself from weighing in on an election challenge out of Pennsylvania.

“She won’t be convicted off the Court. But this lays the groundwork for adding a 10th justice as first balancing act of Biden and new Congress,” Mr. Heffner tweeted.

He said he endorsed Mr. Ornstein’s proposal to impeach Justice Barrett if she sides with the president and the Republican Party in the Pennsylvania case, saying President Trump suggested he wanted her to tilt the scales in his favor.

The GOP has asked the high court — again — to weigh in on the swing state’s election law, allowing mail-in ballots to be counted up to three days after Election Day.

During Justice Barrett’s confirmation hearing, Democrats on the Judiciary Committee asked her if she would recuse herself from election-related cases, suggesting she could side with Mr. Trump if there’s a contested election next month.

Justice Barrett, though, refused to say if she would not participate in any election dispute.

Progressives have said Mr. Biden will add justices to the high court if he is elected to “pack the court” in order to counter the 6-3 conservative majority. Mr. Biden, though, has refused to say if he would add justices and instead said he would create a committee to study what reforms are needed for the judiciary.

Meanwhile, Justice Barrett was sworn in at the Supreme Court Tuesday morning in a private ceremony. She will participate in the justices’ conference Friday and begin hearing oral arguments next week.

Posted by theodore miraldi at 7:10 PM