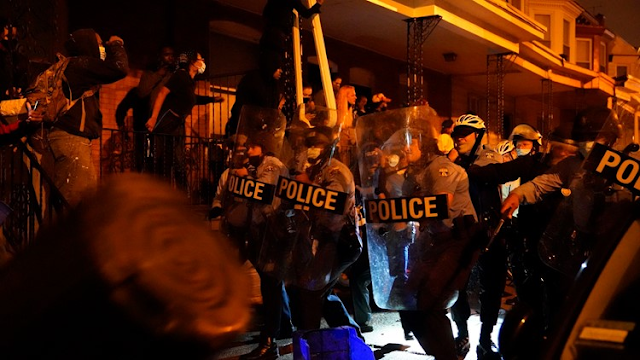 At least 30 Philadelphia cops were injured by early Tuesday as violent mobs torched squad cars and charged lines of officers in a night of carnage sparked by the police shooting of a knife-wielding man.

Organized protests gathered at a park chanting “Black lives matter” soon after news broke of the 4 p.m. death of 27-year-old Walter Wallace, who was shot by police after refusing to drop a knife.

Hundreds of people then swamped the streets, leading to at least 33 arrests by the early hours Tuesday on charges including rioting, assault on police officers, looting and possession of firearms, ABC News said.

The carnage was caught in a series of disturbing videos on social media, including a speeding black truck that ran through a line of officers, hitting a 56-year-old female sergeant. She remained hospitalized with a broken leg and other injuries, NBC Philadelphia said.

Other footage shows dozens of people chasing a large group of officers down the street, as well as clips of a line of officers behind shields being attacked with rocks, bottles and garbage cans.

Police told NBC that a fire department vehicle and five police ones were vandalized — with footage on social media showing at least one police car in flames in the middle of the street. Other footage showed a looter rummaging through the front of an abandoned police van.

At least one police station was also attacked, according to CBS Philadelphia, with windows smashed and graffiti, including “ACAB” — short for “All cops are bastards.”

Looters also hit several Rite Aid stores, clothing and shoe stores and one restaurant, with clothes and merchandise strewn across the sidewalk, ABC said. The glass screens of at least two ATMs had been bashed in.

By early Tuesday, the Philadelphia Police Department confirmed that at least 30 officers had been injured during the riots, mostly from being hit by bricks, rocks and other assorted debris, ABC said. All but the female officer hit by the truck had been treated and discharged, ABC said.

Video of Wallace’s fatal shooting showed him walking toward officers as they had their guns aimed at him, refusing to back away before being shot. His father claims he was hit 10 times.

Philadelphia’s Fraternal Order of Police president John McNesby said officers are now “being vilified” for “doing their job and keeping the community safe.”

“Our thoughts and prayers are with these police officers who had to use lethal force to keep themselves and the community safe,” he said in a statement, adding that “they too are traumatized.”

Outlaw, who arrived at the scene a short time after the shooting, said she “heard and felt the anger of the community.”

“Everyone involved will forever be impacted,” she said in a statement, adding she will “be leaning on what the investigation gleans to answer the many unanswered questions that exist.

Mayor Jim Kenney claimed that the video of the shooting “presents difficult questions that must be answered” by a full probe.

“I look forward to a speedy and transparent resolution for the sake of Mr. Wallace, his family, the officers, and for Philadelphia.”