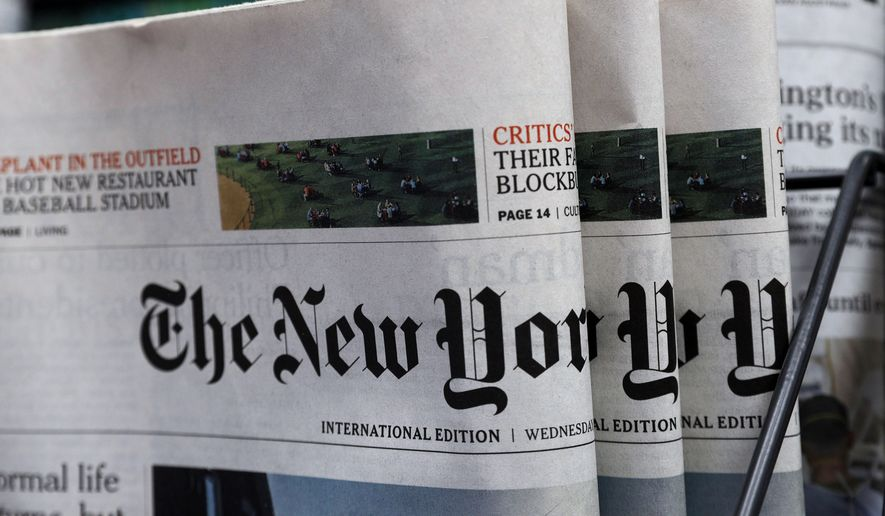 FILE This July 15, 2020, file photo shows copies of The New York Times newspaper displayed for sale at a news stand in Hong Kong. TheNew York Times Co.'s digital transformation continued during the second quarter, with
its online subscription and ad revenue now exceeding its print revenue, even as the economic aftershocks of the coronavirus pandemic slammed its ad sales. (AP Photo/Kin Cheung, FIle)
Stephen Dinan
A woman who, when she was an illegal immigrant, worked at one of President Trump’s golf courses says she paid more to the IRS than President Trump did, given what has now been reported about his finances.

Others point out that if what The New York Times wrote about Mr. Trump’s debt is true, then he may not even be the wealthiest candidate in the presidential race. That might be Democratic nominee Joseph R. Biden.

Republicans on Capitol Hill say the fact that The Times has what it claims to be Mr. Trump’s tax data means “there is a strong prospect that a felony crime was committed” by someone who leaked the legally protected information.

‘To ensure every American is protected against the illegal release of their tax returns for political reasons, I am calling for an investigation of the source and to prosecute if the law was broken,” said Rep. Kevin Brady of Texas, the top Republican on the House Ways and Means Committee, which oversees the IRS.

Budget watchdogs said the reports on Mr. Trump’s taxes should spur an overhaul of the tax code to stop the kinds of legal tactics the president may be using.

Late-night comics joked that Mr. Trump would try to sell off Air Force One or the Grand Canyon to cover his debts.

The word “bombshell” was frequently used to describe the reporting on Mr. Trump. The Associated Press compared the revelations to Republican presidential nominee Mitt Romney’s “47%” gaffe in the 2012 campaign.

“The image of a man flying around in private jets from one luxury property to another and paying less taxes than millions of Americans with far more modest lifestyles could prompt a backlash,” the news service speculated.

Yet little more than a week after the original story, the most striking aspect is how small of a ripple it has made.

In part that’s just the chaos of 2020. In that ensuing week, the candidates have faced off in their first debate, a battle over a vacant Supreme Court seat has begun — and, stunningly, Mr. Trump has contracted COVID-19.

Publicly released polls that have been conducted in the week since the revelations don’t appear to have tested the question. That includes a pair of New York Times/ Siena College Research Institute surveys from Florida and Pennsylvania.

Michael McKenna, a former Trump White House aide who now writes a column for The Washington Times, said there are only two conclusions to draw from the reporting: Either Mr. Trump is a genius businessman who really is a billionaire, or he is a genius marketer who for years has fooled everyone into believing he is a billionaire.

“Somebody who can understand and use the tax code to that extent must be A, pretty smart, and B, must have a lot of dollars passing through his company,” Mr. McKenna said.

The reporting says Mr. Trump wrote off hundreds of millions of dollars in losses from operations such as his golf courses, and from what he deemed business expenses, including personal grooming, reducing his tax liabilities to Uncle Sam.

The reporting also says Mr. Trump has some $300 million in loans that come due over the next several years.

The New York Times has been somewhat cagey about what information it obtained. In an editor’s note, the paper said it will not release the records it used in order to protect sources.

The paper does not claim Mr. Trump broke any laws, but others, citing the newspaper’s data, do.

Morris Pearl, chair of Patriotic Millionaires, said Mr. Trump “committed some amount of criminal tax evasion” but acknowledged much of what he did was legal. Mr. Pearl demanded that Congress step in and cancel those tax breaks.

“Congress created the labyrinth that is our tax code, pushing specific deductions and credits to encourage various activities and opening the door to phone-book-sized tax returns. IRS audits and New York investigations may ultimately determine some of these tax reductions to be improper,” Joe Bishop-Henchman wrote in an analysis for the National Taxpayers Union Foundation.

One thing the original newspaper report did not do was point to any previously unknown links between Mr. Trump and Russia. Trump opponents had long speculated a reason he declined to publicize his tax returns, defying a precedent every major party nominee has followed for decades, is because it would show such ties.

Andrew Weissmann, who worked on the special counsel’s investigation into Mr. Trump and Russia, wondered on Twitter whether Mr. Trump’s debts are held by Russian interests.

Congressional Republicans pointed out that Mr. Trump releases a list of his creditors as part of his annual financial disclosure form, which, unlike his tax returns, is required by law.

“This information is not hidden or secret, and it’s strange that some news outlets are sensationalizing these numbers,” Republicans on the Ways and Means Committee said.

Posted by theodore miraldi at 8:51 PM