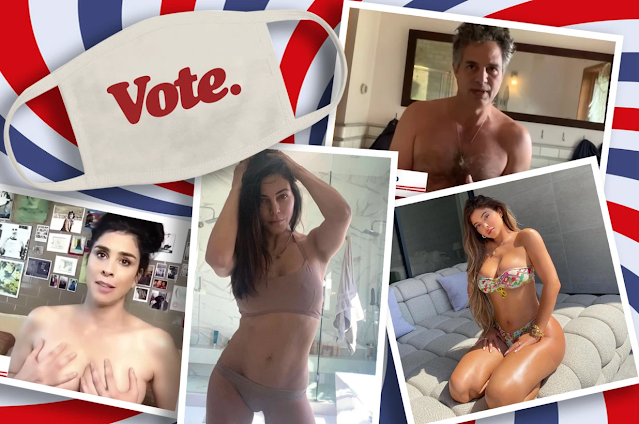 On the fence about voting? Perhaps, like me, you were motivated to finally register because you’ve seen Kardashian family kast-off Scott Disick wearing a hoodie emblazoned with the word “Vote.” A powerful message. And for the low price of $129, you can purchase the sweatshirt from his clothing company, aptly named Talentless.

Not yet convinced that you should participate in our democracy? May I present his quasi sister-in-law Kylie Jenner and the skimpy bikini pic she posted, accompanied by the caption: “but are you registered to vote? … let’s make a plan to vote together.” Or there’s her sister Kendall Jenner who spoke with former Obama speechwriter Jon Favreau on Instagram Live to weigh in on important issues I have come to know the model for, like voter suppression and the electoral college.

“As I’m getting ready to vote, I wanted to make sure you guys were ready to vote, and registered, and feeling great about it,” she said with the flair of a motivational speaker on public access television.

I remember my first time too, Kendall.

There’s Australian Rebel Wilson telling you that she can’t vote but you should. And Zoë Kravitz showing off her mail-in ballot with a caption about her skin-care routine. And a look-at-my-hot-post-pregnancy-bod Jenna Dewan in her underwear saying her postpartum diet includes — you’ll never guess — voting. Meanwhile, YouTube star Tana Mongeau may have committed a crime when she told her 5.4 million subscribers: “if u send me proof u voted for Biden I’ll send you a nude for free.” (OK, that last one was pretty funny, if potentially illegal.)

Where once celebrities and influencers were hawking overpriced skin-care lines or tea that gives you diarrhea, their new hustle is selling pricey voting merch and preaching civic duty to us uneducated schlubs. It gives them clout within their own echo chamber and insulates them from the career-threatening, lunatic “Silence is violence” hordes, especially when they add condescending, apocalyptic flourishes like Dewan did. “Vote like your life depends on it because it does,” she wrote.

They want you to know it’s cool to get political and boogie on down with the government.

But not just any member of government. Their chosen candidate. Many explicitly tell you the only worthy person for the job is Joe Biden, while others simply tell people to vote, leaving the second part silent but implied. However, we know what we are supposed to do: Go Dem. Yas queen! Many of these stars are the same people who urged you to donate your money to the Minnesota Freedom Fund, which bailed out people arrested for violent crimes.

Another side effect of this Tinseltown Dem voter drive is that the act has become akin to a trendy religion, with followers more zealous than the devotees of Scientology — or Goop. Pulling that lever or, more aptly, mailing in your ballot is the new god, and don’t you dare jest about their deity.

Ask the only self-aware man left in Los Angeles: Chris Pratt. He skewered the celebrity voting PSAs with an Instagram post urging followers to vote for his movie “Onward,” a kids’ flick in which two elves go on a journey, which was nominated for a People’s Choice Award.

“With all that’s going on in the world it is more important than ever that you vote,” Pratt wrote. “Just ask any celebrity. They will tell you. Every day. Several times a day. To vote. But me? I will tell you EXACTLY who to vote for.”

Woke scolds came from every crevice of the Internet to blast him for being so insensitive as to joke about such a sacred action.

But if voting isn’t a joke, who the hell gave the OK to the actors and comedians like Tiffany Haddish, Sarah Silverman and Chris Rock (why, Chris Rock? Why?!) to get naked in the most cringeworthy celeb mashup since that black-and-white anti-racism video. Or maybe that “Imagine” nightmare that we’ve all worked so hard to exorcise from our minds. It’s tough to say which was most tone deaf. Mark Ruffalo summed it up when he said, “I know what you’re thinking. You’re thinking, ‘Ruffalo, put your clothes on.’ ”

There is no doubt that voting is important. It’s also very personal, which is why most folks will see right through this charade and not take the naked and wealthy Ruffalo seriously. And remember, their strategy worked so well for the left last time around.