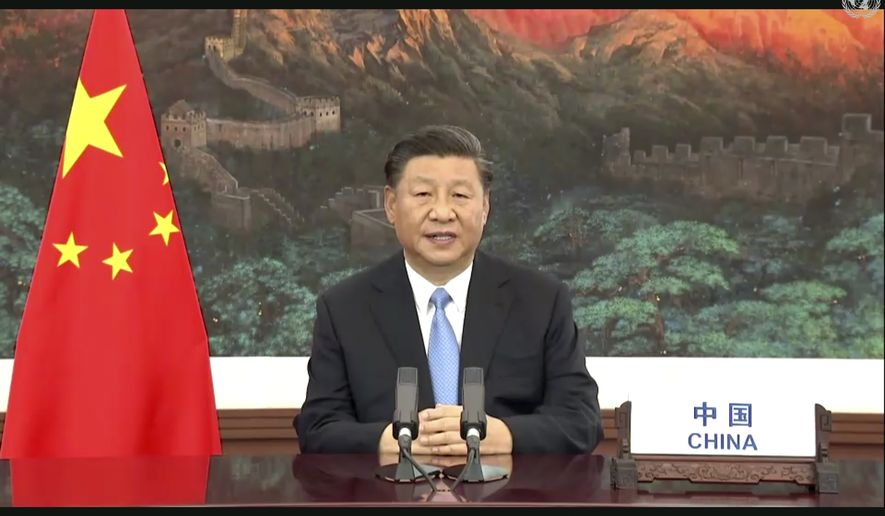 In this image made from UNTV video, Chinese President Xi Jinping speaks in a pre-recorded message which was played during the 75th session of the United Nations General Assembly, Tuesday, Sept. 22, 2020, at U.N. headquarters in New York. The U.N.'s first virtual meeting of world leaders started Tuesday with pre-recorded speeches from some of the planet's biggest powers, kept at home by the coronavirus pandemic that will likely be a dominant theme at their video gathering this year. (UNTV via AP)

China is making a concerted push for control of the post-World War II institutions created to uphold the international order, often using bribery and economic coercion to get its way.

The expanding campaign has prompted calls for the U.S. government to fight back with a permanent entity to craft and implement American strategy to counter China on the global stage.

Analysts say Beijing’s campaign has accelerated since 2017, with a particular focus on securing leadership posts for Chinese officials in U.N. agencies that hold sway over international law and standards for human rights, global trade, digital communications, public health and other matters.

It’s a sharp break from past practice. China, a veto-wielding permanent member of the U.N. Security Council, previously was reluctant to take the diplomatic lead.

Although President Trump has shaken up U.S. policy toward China over the past three years, the Chinese offensive to colonize and dominate multilateral institutions has not gotten the pushback it deserves, say experts at the Foundation for Defense of Democracies, a Washington think tank known for hawkish policy recommendations.

“We’re in a great-power competition, an all-of-society and all-of-country one, and I think precedent has taught us that we can’t engage in that kind of a competition unless we have an independent body that is supraordinate and is tasked with this as a mandate,” said Emily de La Bruyere, a senior fellow with the think tank, said on a recent conference call with The Washington Times.

Congress should create and fund an entity that would “report directly to the president but otherwise be independent from the National Security Council and existing bureaucratic structures,” Ms. de La Bruyere said.

She said the entity should not be large, but nimble and capable of harnessing an all-of-government strategic plan.

Two congressional reports last week found that the Chinese challenge to U.S. interests is rising and that the U.S. lacks the necessary diplomatic, economic and military responses.

One report was by Democrats on the House Permanent Select Committee on Intelligence, and the other was by a Republican-run China task force that Democrats declined to endorse. Both offered a broad range of recommendations, but neither called for the creation of the kind of agency that Ms. de La Bruyere is advocating.

She and other analysts at the Foundation for Defense of Democracies warned that China is stepping up its bid for influence in leading agencies such as the World Health Organization just as the Trump administration is disengaging on many fronts.

“The Chinese government is keen to turn the U.N. and international organizations in general into platforms for its foreign policy agenda … while stifling dissent and democracy and generally hollowing out the rules-based order,” said Craig Singleton, an analyst at the Foundation for Defense of Democracies who works on China issues.

“What’s needed now more than ever is a bipartisan approach to addressing the China challenge regardless of which party proves victorious in November,” Mr. Singleton said.

Analysts say China’s expanding influence at the United Nations is not surprising. It is the organization’s second-largest financial contributor after the U.S. and is a rising economic and military superpower.

China and Russia pose a formidable tandem challenge to U.S. interests. They vetoed resolutions this summer that were critical of Syria and blocked the Trump administration’s push to preserve sanctions on Iran.

Veteran American diplomat Jeffrey Feltman, now a visiting fellow at the Brookings Institution, said fears of a Chinese takeover of the United Nations are “if not overblown, at least premature,” but he added that the U.S. has lost some clout even though it remains the biggest single source of U.N. funds.

“The U.N. can still be a force multiplier for the values and interests of the United States, but only if Washington now competes for influence rather than assume automatic U.N. deference,” he wrote in a Brookings survey of Chinese influence issued last month.

“The U.N. can be characterized as ‘home turf’ for the United States, but walking off the field will facilitate China moving in to fill the vacuum,” he wrote.

If personnel is policy, then China’s influence is clearly on the rise.

Chinese candidates put forward by the ruling Chinese Communist Party have won nearly every major election within the U.N. system for several years, according to a tally by the Foundation for Defense of Democracies.

Chinese officials are now at the helm of the U.N. Food and Agriculture Organization as well as the International Telecommunication Union, which sets global technical standards for digital communications such as the emerging 5G national data networks.

Despite private and at times public opposition from the U.S., the Chinese now also heads the U.N. Department of Economic and Social Affairs, the International Civil Aviation Organization and the Industrial Development Organization. UNIDO has increasingly provided official support for China’s Belt and Road global infrastructure investment initiative.

U.S. officials accuse Beijing of using the Belt and Road Initiative to push predatory loans to weaker nations under the guise of development assistance while it gains financial and political leverage over the borrowers. Chinese officials sharply reject the allegations and claim Washington engages in such tactics.

Beijing recently won an uncontested election for one of its judges to serve a nine-year term on the International Tribunal for the Law of the Sea, although China summarily rejected a 2016 tribunal ruling rejecting its expansionist territorial claims in the South China Sea.

The report released last week by the House Republicans’ task force highlighted China’s success in expanding influence at the United Nations. The push, the report said, is tied to the Communist Party’s United Front Work Department, which is aimed at building international support for Chinese policies.

Under Chinese President Xi Jinping, the department has “taken on even greater importance within the [party] hierarchy, and Xi himself has singled it out as a ‘magic weapon,’” the report said.

Mr. Singleton said China has “actively sought to weaponize this growing influence at the U.N.” with the goal of getting the world to turn a blind eye on Chinese domestic vulnerabilities, such as its treatment of Hong Kong and Taiwan and its record of human rights abuses regarding Tibet and the Uighur population in Xinjiang.

“Just recently, the world began to express a lot of concern about China’s brutal security crackdowns in Hong Kong, as well as China’s ethnic cleansing of Uighur Muslims,” said Mr. Singleton. “[But] Beijing was able to leverage its enormous influence at the U.N. Human Rights Council, where a number of other very prominent authoritarian regimes hold seats, to secure a vote in its favor, in effect providing diplomatic top cover for mass sterilizations in concentration camps.

“It’s kind of unfathomable to think through,” he said. “There have been a lot of examples where Chinese officials have dangled Belt and Road Initiative funding as a corruptive means to convince U.N. member states, particularly ones in Africa, to vote for U.N. leadership candidates so they can set standards on issues affecting everyone in the world. China has no qualms about holding countries hostage in exchange for their compliance.”

The Trump administration, he said, has squandered opportunities to work with like-minded allies to block Chinese candidates that Beijing often spends years strategically maneuvering into positions of U.N. power.

“We seem to be finding out about China’s wins at the near-last minute, when Beijing is taking months and in some cases years to tee up a candidate and buy support,” Mr. Singleton said. “It’s sort of shocking to watch that we’re so flat-footed.”

Ms. de La Bruyere added that “the U.S. can’t rival China’s scale and simply just doesn’t have the capacity to do this unless we do it in conjunction with allies and partners.” The private sector must also be marshaled, she said.

“One of the challenges facing the U.S. is to sit down and say what existing systems for multilateral partnerships still work and haven’t been co-opted and can now be repurposed to engage in this new kind of competition over international rules and systems,” Ms. de La Bruyere said.

“NATO, might be an example,” she said. “It could absolutely be repurposed into a competitive mechanism vis-a-vis China, with allies and not just in a strictly military sense, but across industrial sectors and standards in what China might conceive of as the ‘military-fusion domain.’”

Talk of such initiatives has gained steam recently within Trump administration as well as among NATO member nations.

NATO Secretary-General Jens Stoltenberg has said China’s emergence as a rising superpower is “fundamentally shifting the global balance of power” in ways that should motivate NATO itself to “become more global.”

Separately, Deputy Secretary of State Stephen E. Biegun recently suggested that an informal defense alignment of the U.S., Japan, Australia and India, known as the “Quad,” could be the core of a NATO-style alliance in Asia.

Posted by theodore miraldi at 11:28 AM