Clinton OPERATIVES Worked to TAKE DOWN Trump Even After Election, Declassified Documents Show 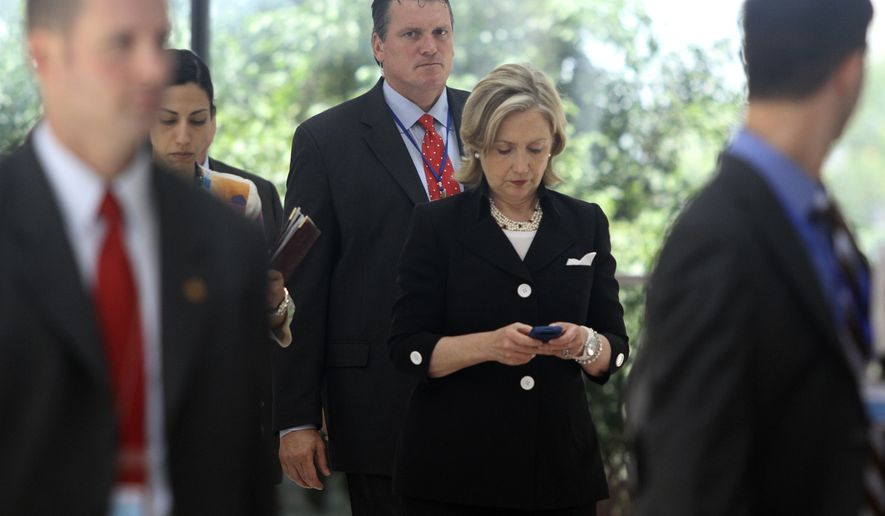 Secretary of State Hillary Rodham Clinton checks her phone after attending a U.S.-Russia meeting in Hanoi, Vietnam on July 23, 2010. The revelation that Mrs. Clinton used an off-the-books email account during her time as secretary of state has raised fresh questions about her credibility heading into 2016. (Associated Press)
Rowan Scarborough

Repeated Clinton-funded communications in 2016 and 2017 with then-Associate Deputy Attorney General Bruce Ohr were creating a basis for Democrats to try to bring down the newly elected president.

The operatives tried to sell Mr. Ohr on election conspiracies that didn’t exist, such as a supposed secret trip to Prague, a Trump campaign-Kremlin liaison team and a mysterious Moscow bank server.

When it came to engaging Mr. Ohr, Mr. Simpson and Mr. Steele’s anti-Trump campaign did not stop with the Nov. 8 election, according to 12 interviews an FBI agent conducted with Mr. Ohr, whose wife, Nellie, worked at Fusion.

On Dec. 10, 2016, Mr. Simpson met at a Peet’s Coffee shop in downtown Washington with Mr. Ohr, who had become an unauthorized anti-Trump messenger from Mr. Steele and Fusion to the FBI.

Mr. Simpson told Mr. Ohr that Mr. Trump’s attorney Michael Cohen “is the go-between Russia and the Trump campaign and replaced Paul Manafort and Carter Page,” according to the FBI’s notes from an Ohr interview.

Both of those assertions by Mr. Simpson proved to be false.

Mr. Simpson also tried to sell Mr. Ohr on the discredited Prague story ­— that is, that Cohen traveled to the Czech Republic’s capital city in August 2016 to meet with aides of Russian President Vladimir Putin and devise a cover-up of the Trump campaign’s role in computer hacking. The FBI concluded that such a trip never happened.

There has been no public evidence that the Russians funded the NRA’s political arm. The NRA presented to a Senate committee information from an audit that showed no such money flow.

On Jan. 20, 2017, Inauguration Day, Mr. Simpson called Mr. Ohr to tell him that someone involved in compiling the dossier may be publicly identified.

The next day, Mr. Steele began text-messaging Mr. Ohr and said an unnamed employee may be in danger and “may need help quickly.” On Jan. 27, Mr. Ohr received a WhatsApp message from Mr. Steele saying the employee “was all right.”

In a subsequent message, Mr. Ohr quoted Mr. Steele: “Steele is beginning to worry about his business” — Orbis Business Intelligence in London.

Mr. Steele said in a February 2017 conversation that he was “pleased” with a CNN story reporting that the FBI was confirming his allegations against the Trump campaign. CNN reporters repeated that claim over the next two years.

In fact, none of Mr. Steele’s anti-Trump claims was proved. Peter Strzok, the lead FBI agent, told The Atlantic magazine that the dossier was “inaccurate” and led him down “wild-goose chases.”

The former spy claimed that Sergei Millian, a Belarusian who ran an American/Russian business group, used the server.

There was never any proof of this. Trump Organization officials told The Washington Times that they did not conduct business with Mr. Millian and told him to stop claiming he had.

“Simpson believes Millian is an SVR officer, however he is deducing this from Millian’s alias not because he was told Millian was SVR,” a Form 302 says. “Millian may have overseen many financial transfers from Russia to assist the Trump campaign.”

The Alfa bank server theory became steady lore to the political left as it sold the idea of a Trump conspiracy.

According to the FBI’s interview notes, Mr. Simpson told Mr. Ohr: “The New York Times story from October 3, 2016 that downplayed the connection between Alfa Bank servers and the Trump campaign was incorrect. There was communication and it wasn’t spam.”

The FBI in February 2017, as Mr. Simpson continued to sell the conspiracy, concluded there was no such server, according to a report by the Justice Department’s inspector general.

Mr. Steele was outed as the dossier author shortly after BuzzFeed posted its 17 memos on Jan. 10, 2017, prompting him to go into hiding.

Mr. Steele continued to text-message Mr. Ohr into the spring of 2017.

In May, Mr. Steele said Fusion GPS representatives “would be visiting Steele soon and were in the process of ‘lawyering up.’”

“Steele was interested in working with the FBI and had additional information if the FBI was interested,” the Form 302 quotes Mr. Ohr as saying.

After news broke that Mr. Ohr had inserted himself into the Steele-Fusion GPS pipeline, he was demoted and put under an internal inquiry. He resigned from the Justice Department last month.

Senate Republicans have acquired FBI documents that show Mr. Steele relied on one main dossier source, who fed him anti-Trump anecdotes from friends in Moscow. The information was second- and thirdhand gossip.

Intelligence agencies told the FBI that some dossier items, such as the Cohen stories, were Kremlin disinformation. The main source later was identified as Russian national Igor Danchenko, who lives in the Washington area and has traveled to Moscow. The FBI has suspected him of being a Russian agent.

Posted by theodore miraldi at 11:13 AM