'Democrats are a Party of HATE and DEATH. And They Admit It'

Proof abounds that Democrats spout hateful messages, including ill wishes for the president and first lady 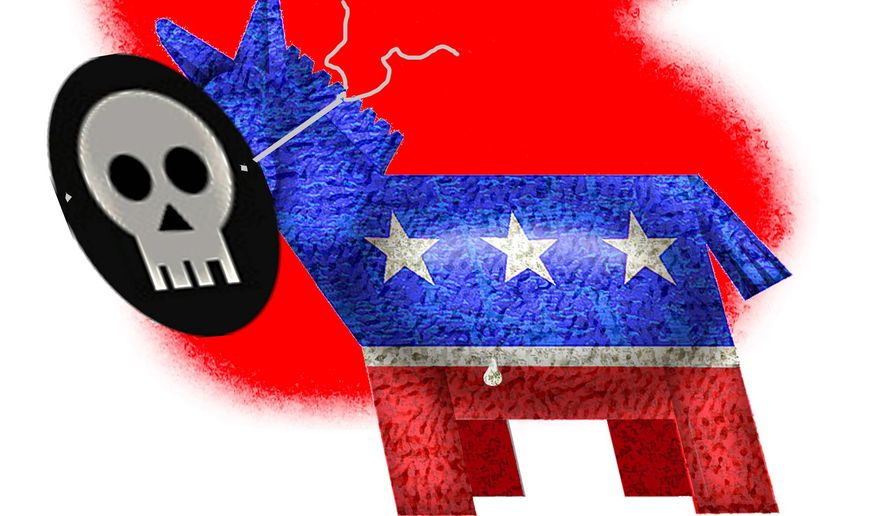 Illustration on the Democratic Party by Alexander Hunter

This past week proved it. The Democratic Party is now a party of hate and revenge. It is a party of violence and vice.

The Democratic Party is one of elite socialists who wish for, and celebrate, the death of all who dare to stand in their way.

Stated simply, Democrats are now a Nietzschean party of the Ubermensch — a party of racial, political and ideological supremacists who openly disdain all who disagree with their Marxist march for power and their bloodlust for control.

Dick Costolo, the former Twitter chief executive officer, tweeted this past week that all businessmen and businesswomen who don’t share his progressive social agenda “are going to be the first people lined up against the wall and shot in the revolution.” He then added, “I’ll happily provide video commentary.”

Bhaskar Sunkara, the founder and publisher of the Jacobin magazine, while extolling the moral superiority of the SJW movement, posted, “I think killing the little Romanov children was justified …” By the way, Mr. Sunkara is known to be the ideological leader for the likes of Ilhan Omar, Alexandria Ocasio-Cortez, Bernie Sanders, and the host of other like-minded democratic socialists now proudly strutting the halls of the U.S. Congress.

Not to be outdone in this celebration of evil, Hillary Clinton’s former communications adviser, Zara Rahim, tweeted, “I hope [Trump] dies … we are waiting for [his] death.”

Well, no. Not even close.

Here is just a smattering of what Democrats think of President Trump, his family and all who support him.

“There is a God,” said ESPN baseball writer Marly Rivera shortly after news broke of the positive COVID-19 test for the president and first lady.

“HAHAHAHAHAHAHA Burn in hell, you mother f–—,” said another.

“[Trump] is a terrible person, and the world will be a better place without him in it. I hope he dies, and I hope it’s painful.” tweeted Zoe.

“For once, I’m rooting for the virus,” said film critic Simon Abrams.

“I hope they both die,” agreed congressional candidate Steve Cox.

Now, it is very important that we not forget the historical framework for such comments. When digesting any political commentary, it is paramount to remember the age-old axiom “context is king.”

In other words, the aforementioned vitriol and hate are built upon a rhetorical foundation. The house stands because it has cornerstones.

Michael Bloomberg told us that those who labor in America’s heartland “lack grey matter.”

Hillary Clinton has called us a “basket of deplorables.”

Barack Obama, after his god-like declaration that he was “the one we’ve been waiting for and that he was the change we seek,” smirked at those who are conservative Christians because we “cling to [our] God and [our] guns.”

Don Lemon has laughed at us for being ignorant “rubes.”

And we must not forget that Joe Biden told the Human Rights Campaign in an interview that everyone who holds fast to traditional moral values are the “dregs of society.”

Over the past days and months, these people — the Democratic Party’s thought leaders — have come out. They aren’t hiding in the closet any longer. They have literally told you who they are and what they think. They have pulled back the curtain to their soul, and they have shown you that it is black as coal.

Jack Posobiec says it well, “The left has spent the entire [year] demanding Trump condemn hate and then instantly flips to hoping that he and his wife die. This is who we are dealing with.”

Donald Trump’s contraction of COVID-19 has exposed the Democrats for the hateful and vile people we always suspected them of being.

Ideas always bear fruit. This is what these people think. These are the ideas they hold dear. As Mr. Posobiec says, “This is who we’re dealing with.”

Richard Weaver once told us that “ideas have consequences.”

Jesus said, “for out of the abundance of the heart the mouth speaks.”

Solomon taught, “but, the mouth of the wicked conceals violence.”

And the prophet Ezekiel warned, “How sick is your heart … that you did (said) all these things, the deeds (words) of a brazen whore.”

Consider this warning from James Woods on Twitter just a few days ago, “they [have] … rioted, looted, burned cities, assassinated peace officers, and now they’re threatening to do more if they don’t get their way. Oh, and they want your vote.”

This is who we are dealing with.

This is who they are.

These people are admitting that they literally want you dead.

Remember in November and vote.

• Everett Piper (dreverettpiper.com, @dreverettpiper), a columnist for The Washington Times, is a former university president and radio host. He is the author of “Not a Daycare: The Devastating Consequences of Abandoning Truth” (Regnery).

Posted by theodore miraldi at 6:48 AM