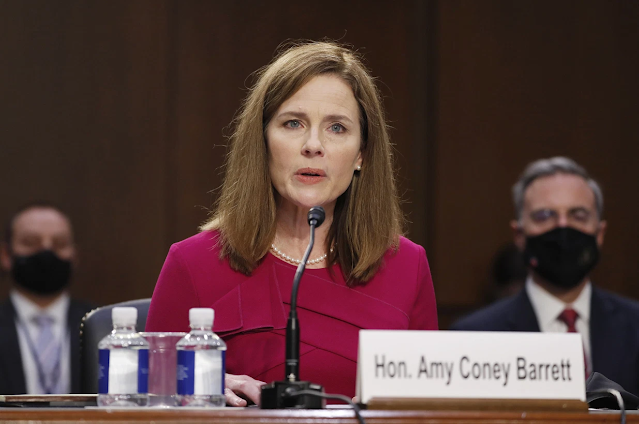 Senate Democrats are trying to turn the confirmation hearing on Amy Coney Barrett into a political victory for their party, but so far they’ve failed miserably. Barrett is the poster-woman the GOP needs to attract college-educated female voters and help close the gender gap come November.

Though they don’t have the votes to block Barrett’s confirmation, liberals are exploiting the televised hearings in pursuit of two goals. One is to fearmonger. They warn that in a case already before the high court, Barrett would provide the fifth vote to overturn ObamaCare. The message: Blame Trump.

Democrats are also trying to undermine public confidence in any Supreme Court ruling on the outcome of the 2020 election. The message here is that unless Barrett recuses herself from any case involving ballot disputes, the outcome is illegitimate.

The demagoguery was turned up to 11.

Democrats on the Senate Judiciary Committee put up poster-size photographs of sick patients who benefit from the Obame­Care’s protections for pre-existing conditions and elimination of lifetime caps on health costs: children suffering from cystic fibrosis, struggling with diabetes and so on. “Kenny is a real person whose life depends on” Obama­Care, Sen. Richard Durbin (D-Ill.) told the hearing. Sheldon Whitehouse (D-RI) warned that Barrett is nothing less than a “judicial torpedo aimed” at the health law.

Yet Barrett’s past legal reasoning suggests she is unlikely to vote to overturn the entire law. More important to most people watching, Barrett has compassion and real-world experience dealing with costly medical problems. She took pains to explain that when she first brought her adopted daughter Vivian home from Haiti, doctors predicted the baby would never be able to walk or talk. Barrett has six other children now, including another son, JP, adopted from Haiti and a youngster with Down syndrome.

Durbin asked her Tuesday if she has seen the George Floyd tape. Yes, Barrett explained. It was “very difficult” for her family. She worried that she has raised her children “in a cocoon” shielded from racial hate. She and her daughter Vivian “wept together,” worrying that little JP or Vivian might some day have would face the same racialized police brutality.

None of it was enough. Democrats pressed Barrett to recuse herself. Sen. Richard Blumenthal (D-Conn.) warned Barrett that “her participation in any case involving Donald Trump’s election would immediately do ­explosive harm to the court’s legitimacy and to your own credibility.”

Yet blame the Democratic Party for the increasing likelihood that the election will land in the Supreme Court. Democratic groups across the country are aggressively suing in lower state and federal courts demanding that ballots arriving after Nov. 3 be counted, contrary to state laws. In effect, canceling the finality of Election Day. That strategy is ­already being challenged in the US Supreme Court. The court could resolve the issue before the election or afterward.

Amy Coney Barrett says she's made no promises to Trump

Asking Barrett to recuse herself makes no sense, any more than demanding that Trump appointees Neil Gorsuch and Brett Kavanaugh do so. Or the justices who were confirmed to the high court when Joe Biden chaired the Senate Judiciary Committee. Justice Ruth Bader Ginsburg didn’t recuse herself in a case involving President Bill Clinton, though he named her to the high court.

Barrett told the hearing that she owns a gun, is pro-life and attends church regularly. But she also assured the senators that her duty is to uphold the law, not impose her values and views on the nation. “I am not queen of the world,” she said.

Durbin challenged Barrett’s assurances, arguing that “it’s simplistic to think” being a justice is a “robotic performance.” He’s got a point. But as Sen. Lindsay Graham (R-SC) pointed out at the beginning of Tuesday’s hearing, “no one ever questions whether our liberal friends can set aside their views.”

Graham said he is “going to do everything” to make sure she has a seat on the high court. Without a doubt, she has the qualifications, and he has the votes.

*Betsy McCaughey is a former lieutenant governor of New York.

Posted by theodore miraldi at 9:54 PM