We all need to better understand the Constitution's Article VI 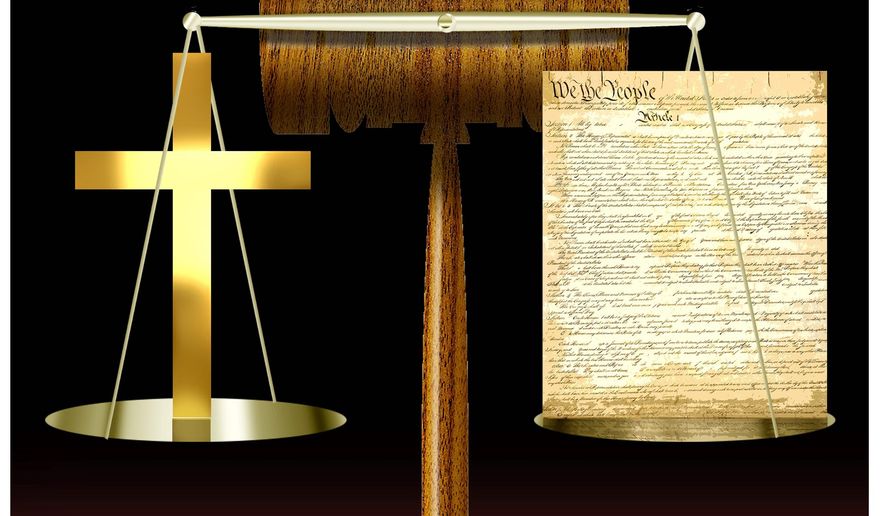 Illustration on jurists, faith and the Constitution by Alexander Hunter
Manuel A. Miranda

These past two weeks a number of television commentators have expressed alarm that Democrats might once again, as they did three years ago in her previous hearing, show their bigotry against Judge Amy Coney Barrett’s authentic Catholic identity. Most refer to the First Amendment’s free exercise of religion clause. News packages have compared the issue to the roadblock to John F. Kennedy’s milestone election as the first Catholic president.

Well, no. Neither application is right. And as Justice Antonin Scalia used to say, “it’s important to get it right.”

Judge Barrett will be the seventh Roman Catholic on the current U.S. Supreme Court, but only the 14th Catholic among the 114 justices who’ve served in the high court’s 230-year history. This should only remind us that Catholics were long treated as second-class citizens and mostly kept out of the halls of governance.

This is not the first time that a judicial nominee’s authentic Roman Catholic identity has been a topic of discussion. In 2003, Chuck Schumer, New York Democrat and at the time a junior member of the Senate Judiciary Committee, was the most prominent bigot of the time when he questioned Judge William Pryor on his “deeply held beliefs.” Judge Pryor, a devout Catholic, told Mr. Schumer that not only did he think Roe v. Wade was bogus, he added that it had caused the deaths of millions of innocent unborn lives. He became an instant national hero to his fellow travelers.

That year, Senate Majority Leader Bill Frist, Tennessee Republican, reminded a thousand pastors at the National Hispanic Prayer Breakfast that the U.S. Constitution contained three religion clauses, not just the First Amendment’s two protecting the free exercise of religion and prohibiting a state-sponsored church. The religious test clause of Article VI, prohibiting inquiry into a nominee’s religious views, he said, was the “rock” upon which the “house” of America’s thriving religious liberty was founded.

When John Roberts was nominated to the high court in 2005, in a span of minutes, three journalists asked me to respond to liberals’ raising Judge Roberts’ Catholic religion as an issue. As if there were a Republican talking point, they each asked in similar words: “What’s the line on that?” A fourth prominent reporter startled me further by asking: “What religion test clause? Where does that appear?”

“The line” on Democratic senators’ anti-Catholic bigotry is, as Mr. Frist noted in the speech I wrote for him, in Article VI of the U.S. Constitution. There it says: “No religious test shall ever be required as a qualification to any office or public trust under the United States.”

Four Catholic nominees later — Samuel Alito, Sonia Sotomayor, Brett Kavanaugh and now Amy Coney Barrett, it would seem we have not made much progress all around. Democrats did not learn the lessons of election backlashes against their last attack on judicial nominees of faith, and journalists have still not read the Constitution.

Let’s get it right. When they probe Judge Barrett’s Catholic identity, Democrats are not saying that the judge doesn’t have the freedom to practice her faith. It is much worse. They are saying that if she shares her Catholic Church’s beliefs she is not fit to serve on the Supreme Court. They are violating their oath to uphold the Constitution, specifically Article VI, which states our first, and the mother of all our civil rights.

Kennedy’s controversy in 1960 did involve Article VI, true, but not its “religious test clause.” Kennedy, as his wife, Jacqueline, put it, was “not even a good Catholic.” His issue was the Article’s other provision that officeholders “shall be bound by oath” to support the Constitution. The question for Kennedy was whether he had any foreign allegiance that might impact his oath, such as to the pope.

The two Article VI clauses — the oath and the test clauses — are quite separate in their origin and aim. At the Constitutional Convention proponents of the Oath Clause wanted public servants to be “sincere friends to religion.” Greater forces, however, lobbied that there be no “religious test” for office. Not least of lobbyists was America’s first Roman Catholic bishop, Maryland’s John Carroll, founder of Georgetown University, whose brother, Daniel, was just one of only two Catholics in the Philadelphia Convention. Virginia’s Baptists and Pennsylvania’s Quakers agreed.

When England passed its two vile Test Acts, they did not prohibit Catholics from holding public office. The “tests” sought to exclude anyone from public office who, for example, believed that the bread and wine in the Eucharist turned into the body and blood of Jesus Christ; a fundamental tenet of Catholic belief. Tests were similarly crafted to exclude Baptists, Presbyterians, Congregationalists and Quakers.

Requiring an oath for office was the framers’ nod to God; that no particular religiously driven beliefs bar officeholders was a nod to their painful experience with the religious intolerance of England.

The religious test clause does not guard against simple discrimination against Catholics or others. It is not like race or sex. What Ms. Feinstein did three years ago in questioning Judge Barrett’s adherence to Catholic “dogma” was much more repugnant than that. It was a constitutionally prohibited probe of what Judge Barrett believes based on her religious convictions. It tapped the most central nerve of our American experience.

It was for good reason that the English populated America’s shores, and that their descendants wrote our Constitution as they did. And now, here we all are.

• Manuel A. Miranda served as judicial nominations counsel to the Senate Majority Leader and is chairman of the Third Branch Conference.

Posted by theodore miraldi at 12:23 PM