Facebook employees have donated $2.4 million to Democrats this year 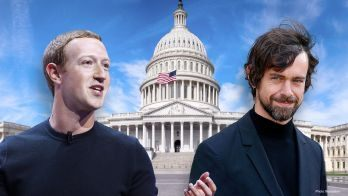 Facebook and Twitter employees have sent more than 90% of political donations to Democrats so far in 2020, according to news reports.

That amount includes "all federal donations" from Facebook and Twitter employees this year based on records available through OpenSecrets.org, a research group that tracks money in politics by the nonprofit Center for Responsive Politics.

Both companies recently came under fire after deciding to reduce the spread of a New York Post article that shows purported communication between Biden's son, Hunter Biden, and an adviser to a Ukrainian energy company.

"While I will intentionally not link to the New York Post, I want be clear that this story is eligible to be fact-checked by Facebook's third-party fact-checking partners. In the meantime, we are reducing its distribution on our platform," Facebook Policy Communications Director Andy Stone wrote in a Wednesday tweet.

Twitter founder Jack Dorsey, who donated exclusively to Democrats in 2019, according to OpenSecrets.org, called the company's botched rollout of the ban "unacceptable" in a Thursday tweet. Users were blocked from sharing the Post article via private message and as direct tweets without explanation.

A number of high-level Republican congressmen including Sens. Josh Hawley of Missouri and Ted Cruz of Texas, as well as Reps. Jim Jordan of Ohio and Ken Bunk of Colorado, are calling on the websites to explain their respective reasons for blocking the article. Hawley sent a letter to both companies inviting them to testify before Congress.

Posted by theodore miraldi at 9:25 AM