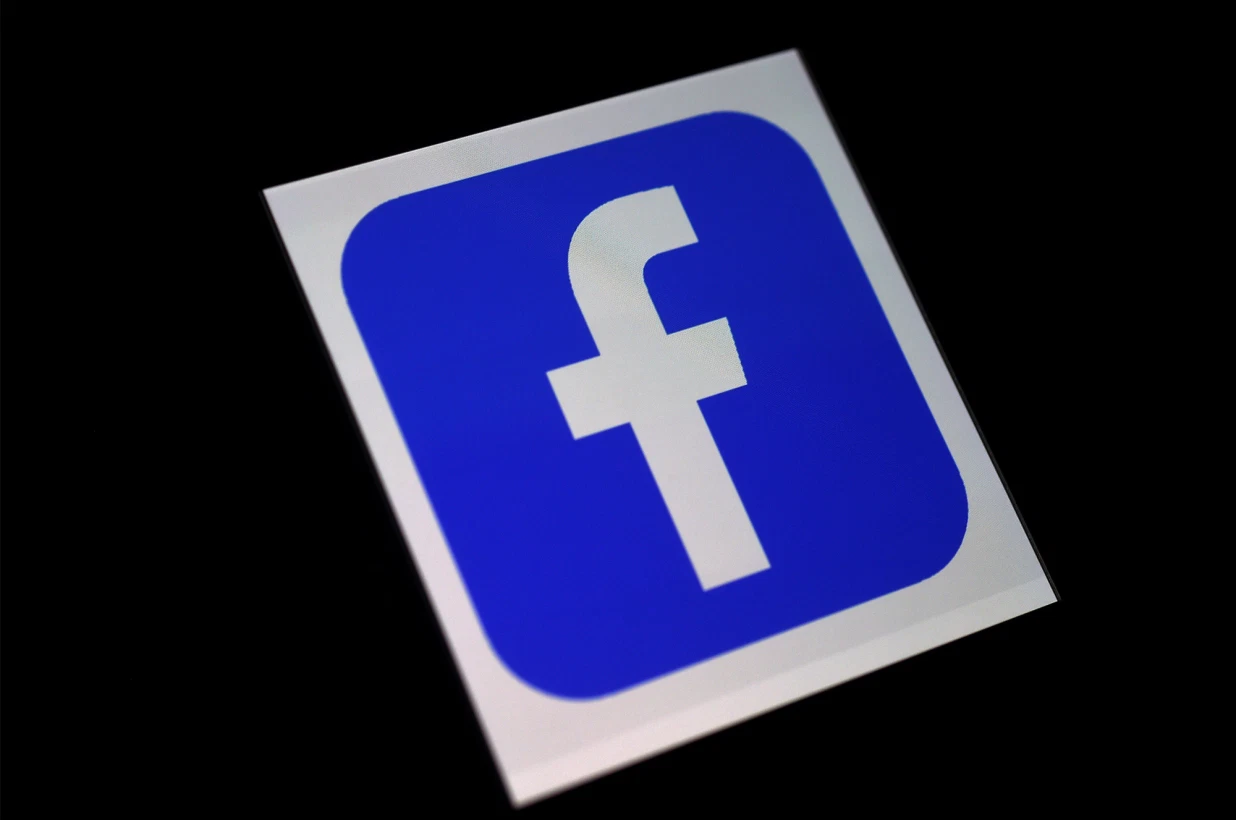 A gloomy rain had left the joint deserted, yet the man across the table from me spoke in hushed tones and looked over his shoulder in between remarks for fear of retaliation. Yet he felt he had to speak out, because staffers are “intentionally trying to swing people further to the left,” as he had put it in an e-mail requesting the meeting.

I already knew that, of course. It was a Facebook communications manager, Andy Stone, who on Thursday announced the firm was reducing circulation of The Post’s still-undisputed reporting on the Hunter Files — an employee who happened to work for Democratic lawmakers before joining the tech giant. What the Facebook insider wanted to impress upon me, however, was how Facebook’s partisan tilt is common knowledge inside the firm.

He had the secret chats to prove it.

Facebook employees who wish to speak freely take to Blind, an anonymous social network for the tech industry, where workers at major firms like Uber, Google, Twitter and the like trade gossip and occasionally blow the whistle on malfeasance. 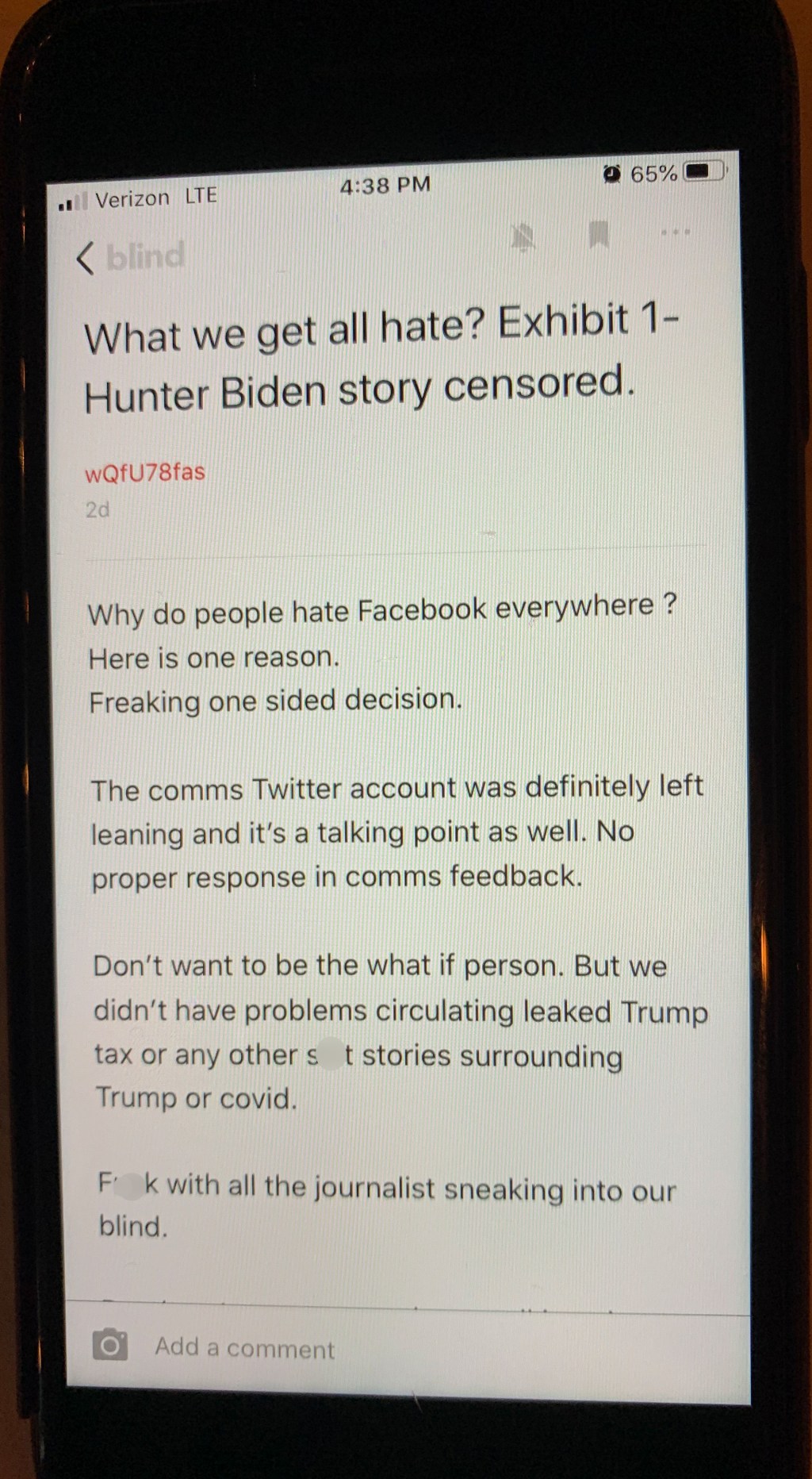 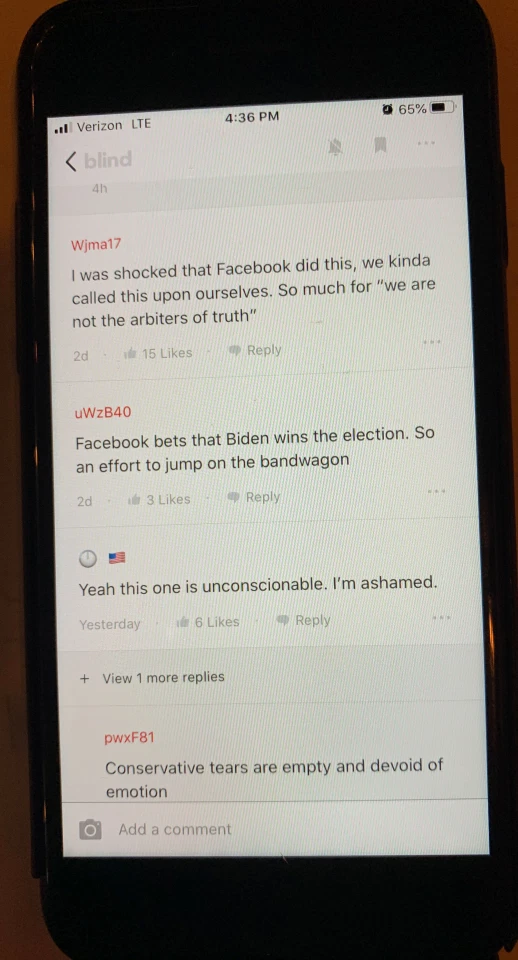 So what do Facebook workers think about the company’s handling of our story? The comments speak for themselves:

“[Facebook] employees want Trump to lose,” wrote one user. “If that means rigging [the platform] against him, they don’t care.” The post garnered 29 “likes” from other employees.

“I was shocked that Facebook did this,” said another. “We kinda called [brought] this on ourselves. So much for ‘we are not the arbiters of truth.’ ” That comment garnered 15 “likes.”

Still other comments: “Facebook bets that Biden wins the election. So an effort to jump on the bandwagon.” “Yeah this one is unconscionable. I’m ashamed.” “Imagine if we censored some leaked Trump stuff. It would be the #1 upvoted question tomorrow for Mark [Zuckerberg company-wide]’s Q&A.”

Another employee wrote a detailed critique: “Why do people hate Facebook everywhere? Here’s one reason. Freaking one-sided decision. The comms Twitter account [Andy Stone’s] was definitely left-leaning, and it’s a talking point, as well. No proper response to comms feedback. Don’t want to be the what-if person. But we didn’t have problems circulating leaked Trump tax or any other s–t surrounding Trump or COVID.”

“If Trump loses his supporters won’t totally blame the obvious censorship that is happening right now,” wrote one sarcastic employee. “If Biden wins, all those questions will go away? Hell no. In fact, he is better off losing, if he doesn’t want more scrutiny into his son’s ill-gotten gains.”

So could these voices of reason prevail inside the company? The Facebook insider, who shared the Blind comments with me, was pessimistic. “The whole thing,” he said, “is run by super-woke millennials and gen-Xers. This overwhelming majority of people make sure there’s no chance of breaking through the ideological barrier.”

As a Facebook employee, the insider told me, “if you’re left-wing, you can say what you want. But if you’re conservative — or even just apolitical — you have to go on this anonymous app” to speak your mind.

Sohrab Ahmari is The Post’s op-ed editor. This is the first of a multi-part investigation into Facebook. Tomorrow: Facebook’s Orwellian “hate-speech engineering” team.

Posted by theodore miraldi at 9:17 AM