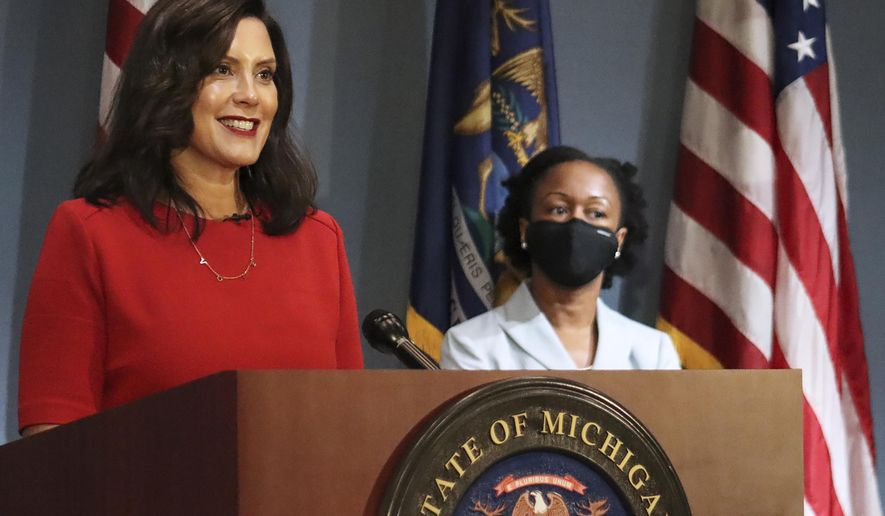 Federal and state authorities on Thursday arrested 13 men they say conspired to kidnap and kill Michigan Gov. Gretchen Whitmer because, in part, of her strict coronavirus lockdown measure that sparked protests across the state.

Federal prosecutors have charged six men, who were members of an unidentified militia, with conspiring to kidnap Ms. Whitmer, a Democrat. If convicted, all six could face life in prison.

Separately, Michigan State Attorney General Dana Nessel lodged state charges against seven additional defendants in the plot. All told, those seven individuals face 19 state felony charges, including state terrorism counts, that could land each in prison for more than 20 years.

It is not clear what role the state defendants played in the kidnap plot.

At a press conference announcing the charges, U.S. Attorney for the Eastern District of Michigan Matthew Schneider called the allegations “deeply disturbing.”

“All of us can disagree about politics, but those disagreements should never, ever result in violence,” he said.

The militia members at least twice conducted surveillance at Ms. Whitmer’s vacation home, and discussed kidnapping her and moving her to a remote location to stand “trial” for treason before the Nov. 3 election, according to court documents.

“Snatch and grab, man. Grab the f—n Governor. Just grab the b—ch. Because at that point, we do that, — it’s over,” one of them said according to an affidavit filed in a federal court.

In August, the group took pictures and video of her vacation home as they drove by and learned how close police were to the house, according to court documents.

By mid-September, militia members detonated an IED that was surrounded by human silhouette targets, the FBI said, and plotted placing an explosive device under a highway overpass to divert police from the vacation home.

The group also planned to raise about $4,000 to get the explosives they wanted to blow up the overpass leading to Ms. Whitmer’s vacation home. Those fund-raising efforts ultimately brought them to the attention of a confidential FBI informant, according to court documents.

Militia members also discussed knocking on Ms. Whitmer’s door and “when she answers it just cap her,” the affidavit quotes one of the defendants.

One of the defendants, Adam Fox, purchased an 800,000-volt taser to use in the kidnapping, the FBI said.

Mr. Fox also called Ms. Whitmer a “tyrant b—h” and asked the group to link with others for ideas of what to do.

“Several members talked about murdering ‘tyrants’ or ‘taking’ a sitting governor,’” an FBI agent wrote in the affidavit. “The group decided they needed to increase their numbers and encouraged either other to talk to their neighbors and spread their message.”

The militia group also met in Ohio and Wisconsin and, while in Wisconsin, another defendant Barry Croft tried to make an IED using black powder, balloons and BBs for shrapnel, according to the FBI.

The group also discussed a plot to gather 200 men and “storm the Capitol in Lansing and take hostages, including the governor,” the affidavit says.

At the meeting to discuss storming the Capitol, they mulled using Molotov cocktails to destroy police vehicles and kill first responders, the FBI said.

Jonathan Lewis, a research fellow at the George Washington University’s Program on Extremism, said Thursday’s arrests are a sign that anti-government militia groups have become more aggressive in recent months.

“Anecdotally, we are certainly seeing a rise in cases where they are very willing to and very quick to go from towing across the line from First Amendment protected speech to online calls for violence to taking steps in furtherance of acts of violence,” he said.

“Cases like this show the broader anti-government milieu is very quickly becoming a popular spreadable ideology that attracts individuals across the country,” Mr. Lewis continued.

Authorities said the defendants were angry about Michigan’s strict coronavirus lockdown. Ms. Whitmer has responded to the deadly pandemic by imposing some of the toughest restrictions in the country, sparking mass protests throughout the state.

President Trump and Republicans accused Ms. Whitmer of going too far. She banned all unnecessary travel, including barring residents from traveling to second homes.

“The lockdown has been a lightning rod and the primary focus for a lot of these groups because you have so much shared anger and frustration,” Mr. Lewis said. “It can very quickly be translated from anger to frustration into fears the governor who is perpetrating all of this will overreach into our lives.”

“Fox referred to Gov. Whitmer as ‘this tyrant b—’ and stated ‘I don’t know, boys, we gotta do something,’” the FBI agent wrote. “You guys link with me on our other location system, give me some ideas of what we can do.”

Ms. Whitmer “has no checks and balances at all. She has uncontrolled power right now,” one of the militia members allegedly said, according to court documents.

A coalition of gun groups Thursday blamed the president’s heated rhetoric aimed at Ms. Whitmer for emboldening the defendants. After a group of armed protesters demonstrated against the coronavirus restrictions at the Michigan capitol, Mr. Trump tweeted “Liberate Michigan.”

“Since the beginning of the pandemic, President Trump has not only refused to condemn threats against Gov. Whitmer — he’s encouraged them,” said Shannon Watts, founder of Moms Demand Action. “It’s clearer than ever that the safety of the American people depends on getting him out of the White House this November, then disarming hateful extremists like the men who plotted to kidnap Gov. Whitmer.”

Authorities identified the six federal defendants as Mr. Fox, Mr. Croft, Ty Garbin, Kaleb Franks, Daniel Harris and Brandon Caserta. All of them live in Michigan, except for Mr. Croft, who resides in Delaware.

“There has been a disturbing increase in anti-government rhetoric and the reemergence of groups that embrace extremist ideologies,” Ms. Nessel said at the press conference. “This is more than just political disagreement or passionate advocacy, some of these groups’ mission is simply to create chaos and inflict harm upon others.”

The individuals facing federal charges first appeared on law enforcement’s radar in March when the FBI learned its members were trying to obtain personal information, including addresses of local law enforcement officers, according to court filings.

FBI agents say there are recordings of a discussion to attack a Michigan State Police facility as part of their plot.

“At the time, the FBI interviewed a member of the militia group who was concerned about the group’s plan to target and kill police officers and that person agreed to become a [confidential source],” the agent wrote.

In June, Mr. Croft and 13 others from multiple states met in Dublin, Ohio, near Columbus to discuss overthrowing the government, according to the affidavit.

A confidential FBI source attended the meeting, according to the affidavit.

“The group talked about creating a society that followed the U.S. Bill of Rights and where they could be self-sufficient,” the FBI agent wrote. “They discussed different ways of achieving this goal from peaceful endeavors to violent actions. At one point, several members talked about state governments they believed were violating the U.S. Constitution, including the government of Michigan and Governor Gretchen Whitmer.”

Criminal charges were filed within hours of an FBI team raiding Mr. Garbin’s home in Hartland Township on Wednesday.

“As part of that recruitment effort, Fox reached out a Michigan-based militia group,” the agent wrote.

The FBI had been investigating the militia since March after a local police department learned its members were trying to obtain personal information, including addresses of local law enforcement officers, according to the court filing.

“At the time, the FBI interviewed a member of the militia group who was concerned about the group’s plan to target and kill police officers and that person agreed to become a [confidential source],” the agent wrote.

Posted by theodore miraldi at 3:24 PM