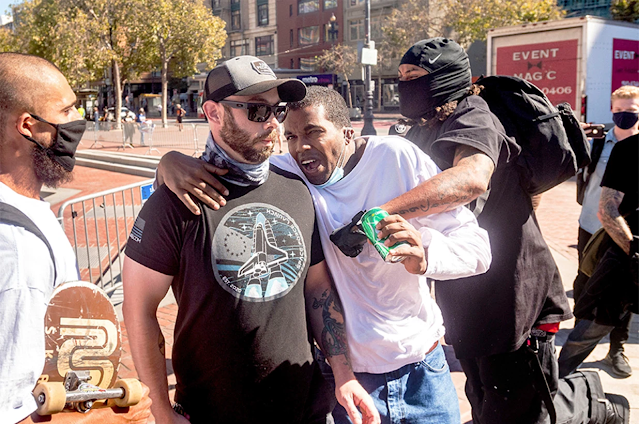 Philip Anderson, center, organizer of a free speech rally by conservative activists in San Francisco, is attacked by a counter-protester. AP

A free speech rally organized by conservative activists in San Francisco quickly devolved into chaos and was immediately canceled Saturday when several hundred counter-protesters showed up and attacked those gathered.

Right-wing group Team Save America planned the rally to protest Twitter, charging that the social media giant squelches conservative speech after it censored The Post’s exposé on Hunter Biden’s emails.

Counter-demonstrators, some wielding plastic water bottles and glass bottles, surged the area around the city’s United Nations Plaza ahead of the event’s 1 p.m. start time.

Philip Anderson, an organizer of the event, was seen getting punched in the face before the rally could start in a video posted on social media.

A crowd of counter-protesters could be heard yelling at him to “get the f–k out.”

Anderson posted a graphic photo of his bloody mouth — which showed one of his front teeth missing and a second tooth barely hanging on —  on Twitter, writing that, “Antifa attacked me for no reason.”

A photographer working for The Associated Press witnessed a supporter of President Trump being taken away in an ambulance and a San Francisco police officer injured on the ground near the plaza.

The event was canceled, though both sides stuck around in the area into the late afternoon. Anderson had also planned a protest against big tech outside of Twitter’s headquarters, according to NBC Bay Area.

The San Francisco Police Department said three cops suffered minor injuries when they were assaulted with pepper spray and caustic chemicals. One officer was taken to a local hospital for treatment.

No arrests were made.

Anderson slammed the counter-protesters as hypocrites and said they are the reason why he’s voting for Trump.

“I love America, I love this country and I love free speech,” he said.