'Have a Little RESPECT': Pelosi Pushes Back on Stimulus Criticism in Heated CNN Interview 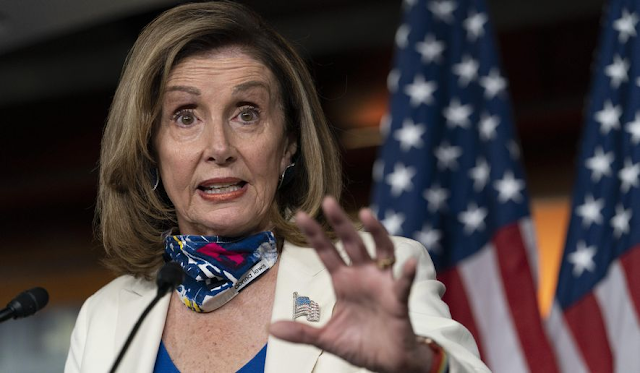 House Speaker Nancy Pelosi on Tuesday ardently defended her decision to hold out on coronavirus negotiations and not accept the White House’s $1.8 trillion offer.

In a heated exchange with CNN’s Wolf Blitzer, Mrs. Pelosi pushed back on some dissent from members within her own party, saying they don’t understand how the negotiations are going.

The CNN host cited arguments from Rep. Ro Khanna, California Democrat, and Andrew Yang, a former candidate for the Democratic presidential primary, that called for the speaker to agree to $1.8 trillion and put pressure on Senate Republicans.

“I don’t know why you’re always an apologist — and many of your colleagues —an apologist for the Republican position. Ro Khanna — that’s nice. That isn’t what we’re going to do and nobody’s waiting until February,” Mrs. Pelosi, California Democrat, said on CNN. “I will not let the wrong be the enemy of the right.”

“They [Republicans] do not share our values. Have a little respect that we know something about these subjects,” she added.

When pressed by Mr. Blitzer that not taking the deal could stand in the way of any deal at all, Mrs. Pelosi pushed back, saying lawmakers know the American people just as well, if not better, than the media.

“We know them. We represent them,” the speaker said. “Have you fed them? We feed them.”

Mrs. Pelosi argued that Democrats have come down around $1.6 trillion from their initial offer a few months ago, and the administration’s offer is still not enough to adequately fund the programs her party believes are vital.

In a letter to Democrats sent earlier on Tuesday, Mrs. Pelosi explained that she and the administration remain at an impasse not only on the total amount but also on several other issues, including funding for state and local governments, a national COVID-19 testing plan, election assistance funds and tax credits.

Mrs. Pelosi reportedly told her colleagues on a conference call later Tuesday that they have never had better leverage on negotiations.

President Trump expressed his intention Tuesday for a large deal, signaling to Republicans to “go big or go home.”

Senate Majority Leader Mitch McConnell announced Tuesday that the Senate’s “first order of business” in returning next week will be to take up a targeted coronavirus relief bill that includes new money for the small-business Paycheck Protection Program.

In Kentucky, he explained that this will be a “targeted” package and also include provisions covering direct payments to individuals, unemployment insurance, liability protections, as well as hospitals and schools.

Posted by theodore miraldi at 7:01 PM