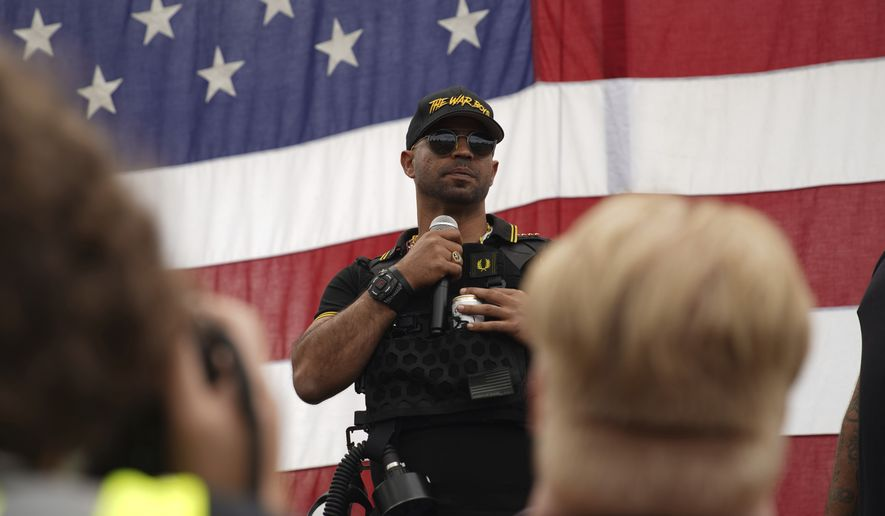 Enrique Tarrio insists that the Proud Boys aren’t White supremacists, and he would be in a position to know. For one, he’s the international chairman. For another, he’s Black.

Mr. Tarrio headed the rising tide of those defending the Proud Boys against accusations of racism after President Trump came under fire for refusing to denounce the right-wing activist group at Tuesday’s debate.

The president, who told moderator Chris Wallace that he had not heard of the group, said, “Proud Boys, stand back and stand by.”

Rep. Alexandria Ocasio-Cortez, New York Democrat, posted video of Mr. Trump’s comment and tweeted, “Donald Trump is a white supremacist” and “This is fascism at our door.”

The message from those who have studied and interacted with the Proud Boys? Calm down.

“The Proud Boys are openly right-leaning group and they’ll openly fight you. They don’t deny any of this, but saying they’re White supremacist, if you’re talking about a group of people more than 10% people of color and headed by an Afro-Latino guy, that doesn’t make sense,” Mr. Reilly told The Washington Times.

“I will go out and say that the Proud Boys as a whole, I will say this on behalf of the entire national organization, denounce White supremacy,” the chief of the Proud Boys Salt Lake Utah Chapter, who gave only the name Thad, told reporters, as shown on Fox13 video.

Mr. Trump told reporters Wednesday that he was “unaware who Proud Boys are” and that he has always denounced White supremacy.

Mr. Reilly said he was not surprised by the accusations that the president was defending White supremacists.

“There obviously is an attempt on the left to describe anyone who opposes mainstream liberal positions as ‘alt-right,’ White supremacist, all the way down the line,” said Mr. Reilly, who is Black. “There’s definitely a double standard on coverage of Antifa versus Proud Boys, for example.”

That double-standard could be seen on Amazon, which pulled sales of debate-inspired T-shirts with the logo “Stand Back and Stand By” while continuing to offer pro-Antifa clothing and items, along with anti-Antifa merchandise.

“All sellers must follow our selling guidelines, and those who do not will be subject to action including potential removal of their account. The products in question have been removed,” an Amazon spokesperson told CBS News.

Even so, supporters continued to defend the Proud Boys. In Delaware, Republican Senate candidate Lauren Witzke credited the Proud Boys with providing her with free security at a rally when Black Lives Matter and Antifa activists turned out to protest.

“I’m not sure when patriotic masculinity, defending yourself, and being Christian became ‘Far-Right,’” tweeted Ms. Witzke, who is challenging Democratic Sen. Christopher A. Coons. “I also don’t recall the Proud Boys rioting and looting the city of Wilmington like ANTIFA did, either.”

Black Trump supporter Melissa Tate also challenged the “White supremacist” label. She posted a video in which she and Beverly Beatty said the Proud Boys helped provide security for them at a Christian prayer event.

“STOP THE LIES,” tweeted Ms. Tate, who has 440,700 followers. “Proud Boys are NOT White Supremacist. They are Christian men many of them hispanic & some black.”

Founded in 2016 by Vice Media co-founder Gavin McInnes, Proud Boys is listed as a hate group by the Southern Poverty Law Center. Mr. McInnes has sued to have the designation removed.

“We’re a drinking club with a patriot problem,” Mr. Tarrio told CNN at a Sept. 26 rally in Portland, Oregon. “As Proud Boys, I think our main objective is to defend the West.”

Proud Boys, which describes its members as “Western chauvinists who refuse to apologize for creating the modern world,” have clashed repeatedly with Antifa in Portland.

The Oregon Justice Resource Center filed a lawsuit last week against the Proud Boys, alleging that four counterprotesters were injured by Proud Boys activists wielding paintball guns and bear mace during an Aug. 22 melee in Portland.

“The Proud Boys represent an unconventional strain of American right-wing extremism,” the Anti-Defamation League said on its website. “While the group can be described as violent, nationalistic, Islamophobic, transphobic and misogynistic, its members represent a range of ethnic backgrounds, and its leaders vehemently protest any allegations of racism.”

Supporters of the Proud Boys include right-wing pundits Ann Coulter and Michelle Malkin, as well as former Republican consultant and convicted felon Roger Stone, whose 2019 sentence was later commuted by Mr. Trump.

During the Tuesday debate, Mr. Trump was asked whether he would be willing to tell White supremacists and militia groups to “stand down and not add to the violence in a number of these cities,” referring to the ongoing protests and rioting.

“Sure, I’m willing to, but I would say almost everything I see is from the left wing, not from the right wing,” Mr. Trump said. “I’m willing to do anything. I want to see peace.”

Mr. Trump then challenged Mr. Biden to condemn Antifa, to which Mr. Biden replied, “Antifa is an idea, not an organization.” Mr. Trump replied, “Oh, you’ve got to be kidding.”

Blexit founder Candace Owens asked why Mr. Biden was not asked to condemn Antifa. “Unbelievable. Every person in America knows these riots are being orchestrated by black lives matter and Antifa,” she tweeted.

“Chris Wallace asks the President to condemn white supremacists but did not think to ask Joe Biden to condemn Antifa or BLM,” she added.

• Jessica Chasmar contributed to this report.

Posted by theodore miraldi at 9:22 AM