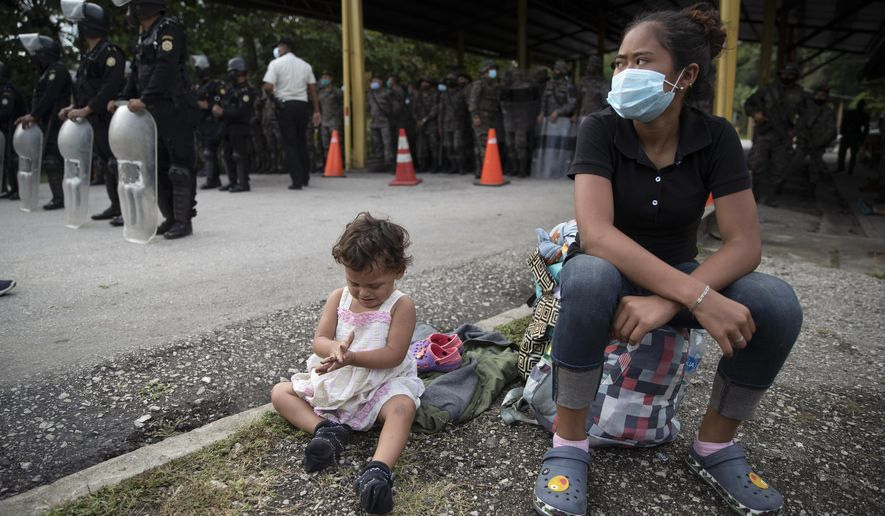 An Honduran migrant and her daughter sit at a roadblock set by security forces in Poptun, Guatemala, Friday, Oct. 2, 2020. Guatemala vowed to detain and return members of a new caravan of hundreds of migrants that set out from neighboring Honduras in hopes of reaching the United States, saying they represent a health threat amid the coronavirus pandemic. (AP Photo/Moises Castillo)

Illegal immigrants from Central America streamed into Mexico earlier this year, betting that a Democrat winning the White House next month would dramatically improve the odds of being able to continue north, successfully jump the U.S. border and gain a foothold.

“I want Trump out,” one Honduran migrant, cradling her child, told the Center for Immigration Studies during a January fact-finding mission. “I’ll wait for that because it would make things easier to get it.”

If Democratic nominee Joseph R. Biden wins the presidency next month, he is likely to pay off on the woman’s bet.

Mr. Biden has vowed to wipe away as much of President Trump’s immigration policies as possible, and given how much Mr. Trump has done through executive action, there is much Mr. Biden can nix with the stroke of a pen.

Gone would be the travel ban, the border emergency that is siphoning Pentagon money to the wall and Mr. Trump’s crackdown on bogus asylum claims. The former vice president also has said that given the reins, he would ask Congress to offer a chance at legal status to 11 million illegal immigrants and expand legal avenues for future immigrants.

The president, meanwhile, sees unfinished business to attend to if he wins another term.

Sanctuary cities still thumb their noses at the president, his border wall remains a work in progress, children born to illegal immigrants on U.S. soil still get automatic citizenship, and despite three years of trying to end and replace Deferred Action for Childhood Arrivals, the Obama-era program remains precariously legal.

There may be no single issue in this election where the two candidates diverge more than immigration.

Mark Krikorian, executive director at the Center for Immigration Studies, said Mr. Trump has the strictest immigration policy of any major-party nominee in modern political history, and “clearly Biden has the most permissive.”

“It’s not just legalizing all the illegal immigrants, which obviously you’d need Congress to do. Bush and Obama tried the same thing. But he’s also proposed to stop all deportations for 100 days, which would include hardened criminals,” said Mr. Krikorian, an advocate for stricter immigration controls.

He said it makes sense that immigration is the most divergent issue for the two men. Mr. Trump made it the centerpiece of his 2016 campaign, and Mr. Biden “is running almost purely as the anti-Trump.”

The issue placed seventh on the list of voter priorities compiled in the Harvard Center for American Political Studies/Harris poll in late September, behind the coronavirus, the economy, health care, race, climate change and civil disorder. It was tied with crime and just ahead of the federal debt and corruption.

Even among Hispanic voters, immigration ranks low, according to Pew Research Center polling.

But Ali Noorani, executive director of America is Better, an advocacy group, said there is a real opportunity for big changes should Mr. Biden win the election.

“If there’s one thing that has become clear over the course of the nation’s response to COVID-19, it’s that the American public has come to truly value the contributions of immigrants who are here — documented or not,” he said.

Mr. Noorani said people in the country illegally but working in essential jobs deserve a chance at a path to citizenship. They join more than 600,000 “Dreamers” and several hundred thousand migrants in the U.S. under special humanitarian temporary protected status as likely targets for Congress to legalize.

Mr. Biden, in his campaign literature, aims even higher. He says all of the “nearly 11 million” illegal immigrants in the U.S. now deserve a chance at citizenship.

Those opportunities are matched, however, by fear of what Mr. Trump might do if given the reins for another four years.

He was referring to the administration’s “zero tolerance” border policy from 2018, as migrant caravans surged north bringing tens of thousands of Central Americans, many of them traveling as families.

Under zero tolerance, about 50% of parents were prosecuted for illegal entry, which meant they were put into federal jails and their children were taken away and put into federally contracted dorms for unaccompanied alien children.

But the administration wasn’t prepared to reunite them after the parents were released, and thousands were separated. Two years later, the government is still trying to connect some children with deported parents.

The policy, in addition to being a public relations black eye, did not stop the surge, which grew until spring 2019, shattering records for children and family migration.

Mr. Biden has vowed to end prosecutions of parents for “minor immigration violations” and said he would work to reunify any children still separated.

He also said he would try to “repeal” state laws that prohibit sanctuary cities because he fears domestic violence and sexual assault victims are afraid to report crimes in those states.

Mr. Trump, by contrast, has spent most of his tenure trying, without much success, to stop sanctuary cities. Instead, sanctuary cities have spread largely in response to his administration’s get-tough policies.

There are some key unanswered questions about both men’s plans.

Despite nearly four years in office, it’s not clear exactly how many of the 11 million illegal immigrants Mr. Trump believes deserve a shot at citizenship.

In 2018, he broke ground by proposing to at least grant DACA recipients a pathway. But he rejected suggestions to add hundreds of thousands of other illegal immigrants under special humanitarian temporary protected status.

Mr. Biden, meanwhile, has said he would stop building the border wall. Those on both sides of the debate wonder whether he would pull down some or all of the hundreds of miles constructed under Mr. Trump.

Most of that mileage is upgrades to fencing Mr. Biden voted for in the Senate in 2006.

Mr. Biden’s campaign website has two immigration plans. One is his own list of priorities, and the other is the product of the unity task force he formed with Sen. Bernard Sanders of Vermont, his chief opponent for the Democratic nomination.

Then there is the question of what illegal immigrants themselves will do.

The Trump administration solved the family migrant surge last year by threatening crippling tariffs on Mexico unless it got tougher about its own borders. Mexico complied and blocked tens of thousands of Central Americans from ever reaching the U.S.-Mexico line.

Meanwhile, agreements struck with Honduras, El Salvador and Guatemala allowed for faster deportations, and new rules on asylum claims let the U.S. push many of the migrants back into Mexico to wait for their cases to be decided. That discouraged many from trying in the first place.

Combined, those moves ended the family surge. Encounters with illegal immigrants at the southwestern border fell from nearly 145,000 in May 2019 to about 23,000 this May, though the numbers are ticking up again.

Mr. Biden said he would revoke Mr. Trump’s asylum changes. His solution to the Central American migrant crisis is nation-building in Honduras, El Salvador and Guatemala. He hopes to improve conditions so people would rather stay than flee to the U.S.

Todd Bensman, the Center for Immigration Studies investigator who found the migrants in Mexico anticipating a Democratic election win, said Mr. Biden’s plans amount to an invitation to a new caravan crisis.

He said he has seen signs that Haitians, Cubans and people from the Middle East and Africa are massing in Mexico, joining Central Americans who are anticipating the ouster of Mr. Trump.

Posted by theodore miraldi at 8:17 AM