Alito and Thomas both dissented from the original Obergefell ruling 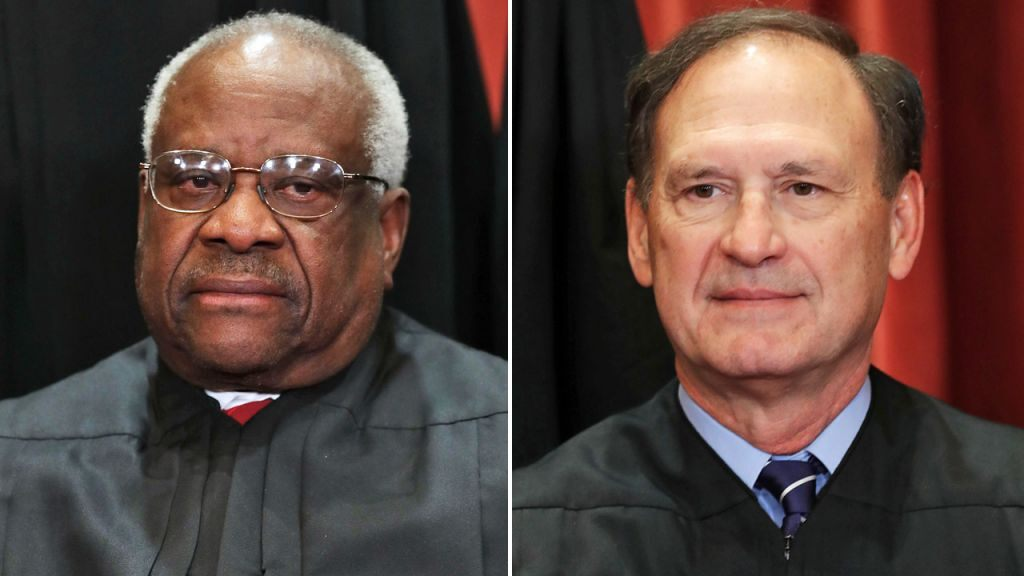 Justices Clarence Thomas and Samuel Alito said Monday that Obergefell v. Hodges, the Supreme Court case that mandated all states recognize same-sex marriages, is "found nowhere in the text" of the Constitution and threatens "the religious liberty of the many Americans who believe that marriage is a sacred institution between one man and one woman."

The statement was written by Thomas and joined by Alito about the case of Kim Davis, a former Kentucky county clerk who said she would not give same-sex couples marriage licenses. The two justices said they agreed with the consensus of the court that it should not take Davis' case, but only because it did not "cleanly present" the "important questions about the scope of our decision in Obergefell."

Thomas and Alito dissented from the original Obergefell decision and their statement Monday could indicate that they would vote to overturn it if presented the chance.

"[T]his petition provides a stark reminder of the consequences of Obergefell. By choosing to privilege a novel constitutional right over the religious liberty interests explicitly protected in the First Amendment, and by doing so undemocratically, the court has created a problem that only it can fix," Thomas wrote. "Until then, Obergefell will continue to have 'ruinous consequences for religious liberty.'"

Thomas said Obergefell forced Davis to choose "between her religious beliefs and her job. When she chose to follow her faith, and without any statutory protection of her religious beliefs, she was sued almost immediately for violating the constitutional rights of same-sex couples."

The Obergefell opinion authored by Kennedy aimed to balance the rights of religious people with those of gay couples, saying that "[m]any who deem same-sex marriage to be wrong reach that conclusion based on decent and honorable religious or philosophical premises."

Kennedy added: "[I]t must be emphasized that religions, and those who adhere to religious doctrines, may continue to advocate with utmost, sincere conviction that, by divine precepts, same-sex marriage should not be condoned."

But Thomas argued Monday that Obergefell is highly flawed and marginalizes those who do not believe in same-sex marriage.

"Obergefell enables courts and governments to brand religious adherents who believe that marriage is between one man and one woman as bigots, making their religious liberty concerns that much easier to dismiss," he wrote. "In other words, Obergefell was read to suggest that being a public official with traditional Christian values was legally tantamount to invidious discrimination toward homosexuals."

Thomas added: "This assessment flows directly from Obergefell’s language, which characterized such views as 'disparag[ing]' homosexuals and 'diminish[ing] their personhood' through '[d]ignitary wounds.'"

Posted by theodore miraldi at 5:40 PM