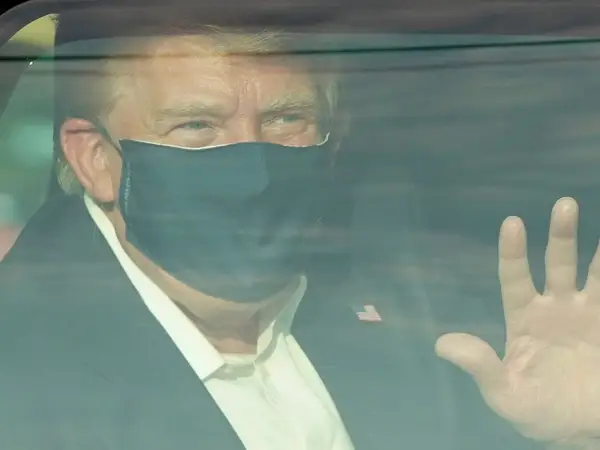 Trump has been hospitalized there since Friday after he tested positive for the coronavirus.

What did they say?

"I would hope that if any harm comes to those agents the attorney general of MD will indict Trump for reckless endangerment, assault (yes the virus he gives off count), etc.," the Post's Jennifer Rubin said.

"The GOP is a death cult. There is only one pro-life party and it's not them," Rubin later added.

Lynn Comella, an associate professor of gender and sexuality studies at the University of Nevada, Las Vegas, wrote in a since-deleted tweet that Trump "is on a killing spree. What's going on at Walter Reed? Who allowed this public health travesty?"

Even an attending physician at Walter Reed, Dr. James P. Phillips, lashed out at Trump.

"That Presidential SUV is not only bulletproof, but hermetically sealed against chemical attack. The risk of COVID19 transmission inside is as high as it gets outside of medical procedures. The irresponsibility is astounding. My thoughts are with the Secret Service forced to play," Phillips said.

Meanwhile, the White House Correspondent's Association blasted Trump for leaving the hospital without reporters in tow.

It is outrageous for the president to have left the hospital — even briefly — amid a health crisis without a protective pool present to ensure that the American people know where their president is and how he is doing. Now more than ever, the American public deserves independent coverage of the president so they can be reliably informed about his health.

What did the president's medical team say?

According to the White House, Trump's doctors approved his brief hospital exit and "appropriate precautions" were taken for those in proximity to Trump.

"Appropriate precautions were taken in the execution of this movement to protect the President and all those supporting it, including PPE. The movement was cleared by the medical team as safe to do," Judd Deere, deputy White House press secretary, said.

Posted by theodore miraldi at 2:11 PM