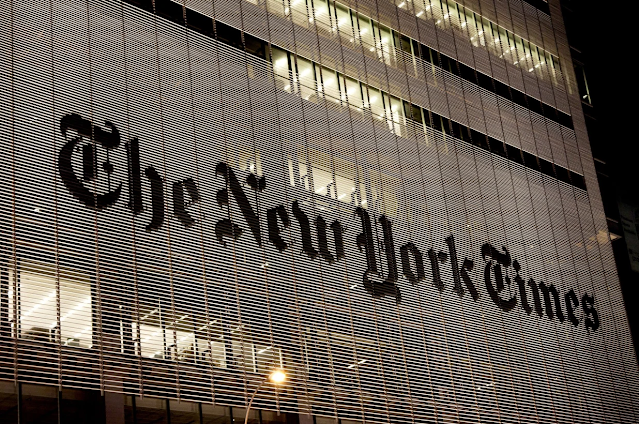 Civil war is raging once again inside the New York Times, this time over the controversial 1619 Project.

Times opinion columnist Bret Stephens ignited the latest explosion with an opinion piece Oct. 9 calling the The 1619 Project a “failed” enterprise that was built on the premise that slavery, not the Declaration of Independence, was the driving force that forged the nation.

Originally published on September 2019 in the Sunday Times Magazine, it earned a Pulitzer Prize for commentary for Nikole Hannah-Jones, who wrote the lead essay. Stephens pointed out that there have been changes since the piece first appeared that softened the original premise — but which were never noted.

The Times now suggests slavery was part of the nation’s birth, not the original assertation of “1619 as our true founding.”

“These efforts to discredit my work simply put me in a long tradition of BW [Black Women] who failed to know their places,” she tweeted.

She also changed her bio description to read “slanderous and nasty-minded mulatrees” in a tribute to black activist Ida B. Wells, who earned that description from the Times back in 1894 only to be awarded a posthumous Pulitzer 100 years later.

Times executive editor Dean Baquet jumped to the defense of his embattled reporter and blasted the piece by Stephens, who works for the opinion side of the paper, and does not report to the news side operations.

The project generated “debate,” said Baquet to staffers Tuesday. “That’s no surprise. Work that boldly challenges prevailing views usually does. I do welcome Opinion’s role in hosting a wide range of views, including those that challenge our work.”

But then he brought the hammer down on Stephens column.

“This column however, raised questions about the journalistic ethics and standards of 1619 and the work of Nikole Hannah-Jones, who inspired and drove the project. This criticism I firmly reject,” he said.

“The project fell fully within our standards as a news organization. In fact, 1619 – and especially the work of Nikole – fill me with pride,” said Baquet, who is the first African-American to head the Times newsroom. “Our readers and I believe our country has benefitted immensely from the principled, rigorous and groundbreaking journalism of Nikole and the full team of writer and editors who brought us this transformative work.”

Stephens in his piece said, “we are best when we try to tell truths with a lowercase t, following evidence in directions unseen, not the capital-T truth of a pre-established narrative in which inconvenient facts get discarded,” Stephen wrote. “And fresh concerns make clear, on all these points — and for all of its virtues, buzz, spinoffs and a Pulitzer Prize — the 1619 Project has failed.”

He said changes made after the original story appeared tried to downplay some of the controversial assertions, which had come under fire from some historians. The Times Sunday Magazine editor Jake Silverstein claimed the changes were “immaterial.”

Academics also have taken issue with the reporting. The National Association of Scholars in an open letter on Oct. 6 called on the Pulitzer Pulitzer Prize Board “to rescind the 2020 Prize for Commentary awarded to Hannah-Jones.”

“Beginning almost immediately after its publication . . . the essay and the Project ran into controversy,” the open letter signed by NAS chairman Peter Wood and over 20 academics claimed. “It has been subjected to searching criticism by many of the foremost historians of our time and by the Times’ own fact checker. The scrutiny has left the essay discredited, so much so that the Times has felt the need to go back and change a crucial passage in it, softening but not eliminating its unsupported assertion about slavery and the Revolution.”

The criticism was strong enough for the Pulitzer Prize board to respond Tuesday as well, but it claimed that it was aware of some of the changes made — and that it would likely not rescind the award.

Posted by theodore miraldi at 3:21 PM