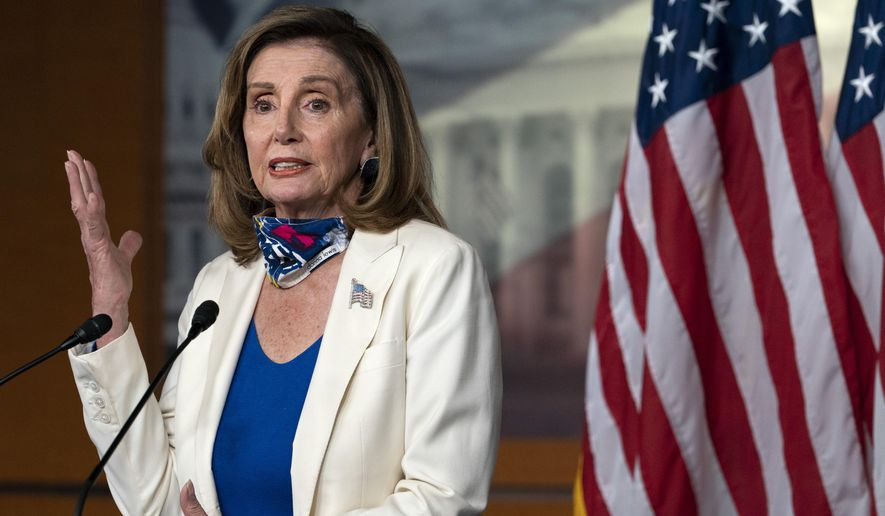 Tens of thousands of airline workers were furloughed Thursday as House Speaker Nancy Pelosi spurned the latest offer from President Trump of $1.6 trillion in coronavirus relief as inadequate.

The president wants one more taxpayer-funded jolt for the economy before Election Day, an urgency underscored by 32,000 more layoffs at American and United airlines and nearly as many in the tourism industry. The White House said Mrs. Pelosi, California Democrat, wasn’t “serious” about the negotiations.

Treasury Secretary Steven T. Mnuchin spoke with Mrs. Pelosi at midday, but the two sides were still about $600 billion apart. The Democratic leader scorned the administration’s proposal as “the heel of the loaf” of bread.

After more talks later in the day, Mrs. Pelosi told reporters there was no deal and she needed to review some papers sent over by Mr. Mnuchin.

Asked about the odds of getting a deal, she replied, “I don’t know.”

House Democrats passed their $2.2 trillion relief plan later Thursday evening, another sign that talks with the White House were not making progress.

The package passed on a 214-207 vote with no Republican support and 18 moderate Democrats, mostly from tough swing districts, defecting from the party line. The bill has no chance in the Republican-led Senate.

Mrs. Pelosi said Republicans don’t “share our values” on providing trillions of dollars in health and economic aid to people affected by the COVID-19 pandemic. She said the two sides were “far apart” on state and municipal aid.

The White House accused the speaker of playing political games instead of seeking a realistic deal.

“Nancy Pelosi is not being serious,” said White House press secretary Kayleigh McEnany. “If she becomes serious, then we can have a discussion.”

The impasse came as more economic warning signs threatened to create more drag on the president’s reelection prospects. U.S. manufacturing activity slowed in September as a purchasing manager’s index fell to a reading of 55.4 from 56 in August, according to the Institute for Supply Management.

American Airlines sent furlough notices to 19,000 employees and United Airlines sent notices to more than 13,000 workers as the industry continues to struggle from the pandemic. American CEO Doug Parker said the furloughs would be reversed if Washington approves another relief package.

The CARES Act approved in March gave the airline industry $25 billion, provided that no workers were furloughed before Oct. 1. The airlines have asked for another $25 billion to keep workers paid through March.

Ms. McEnany said the White House would consider an aid bill addressing only the airlines, but she blamed Mrs. Pelosi for blocking such a move.

“Nancy Pelosi, rather than playing election partisan politics, should come to the negotiating table. Let’s consolidate around things we agree on,” Ms. McEnany said.

The CEOs of 17 of the largest U.S. travel companies called on Washington on Thursday to provide more aid for the industry, which accounts for nearly 40% of all jobs lost during the pandemic.

“In the strongest possible terms, we urge Congress and the administration to reach agreement before the election on a relief package that will give travel employers — and the millions of livelihoods they support — a fighting chance to survive,” they said.

The U.S. Travel Association said spending on travel in the U.S. this year will drop by more than $500 billion.

The American Hotel & Lodging Association released a survey last week finding that 74% of hotels would be forced to lay off additional employees and two-thirds of hotels would not make it another six months if Congress fails to pass another stimulus bill.

“It’s time for Congress to put politics aside and prioritize American workers in the hardest-hit industries,” said Chip Rogers, president and CEO of the organization. “Hotels are cornerstones of the communities they serve, building strong local economies and supporting millions of jobs. Thousands of hotels across America are in jeopardy of closing forever, and that will have a ripple effect throughout our communities for years to come.”

The airline furloughs followed an announcement by Disney that it is laying off 28,000 employees at theme parks and retail stores. While most of Disney’s attractions are open for limited capacity, its two theme parks in California remain closed.

But the weekly jobless claims report came in slightly better than expected on Thursday. The Labor Department said there were 837,000 first-time filers for unemployment benefits for the week ending Sept. 26.

The relief package faced pressures in both parties in Congress. Vulnerable House Democrats were pressing Mrs. Pelosi for a vote regardless of any agreement with the administration to show voters they were taking action.

Many Republicans oppose higher spending generally in a year in which the deficit has topped a record $3 trillion. Most Republican lawmakers oppose the House Democrats‘ package, which includes more than $900 billion in aid for cities and states.

Rep. Kevin Brady of Texas, the top Republican on the House Ways and Means Committee, said Republican lawmakers are looking for “a good, focused agreement.”

“The worry is how much wasteful spending will we have to swallow to do this,” Mr. Brady said on Fox Business. “I think that’s where most Republicans are at.”

He said the Democrats‘ proposal for state and local funding is a concern if not targeted to small towns.

“Do you want America to hurt so bad to get an advantage in the election?” he said.

Asked by reporters whether Mrs. Pelosi might be holding out for a more robust spending package if Democrat Joseph R. Biden wins the presidential election in November, Mr. McCarthy replied, “What benefit would that be? How many more people would be unemployed?”

Mrs. Pelosi said the two sides were “far apart” on state and local aid, disagree on business tax provisions and the Child Income Tax Credit, and that she doesn’t believe any bill is better than no bill.

Ms. McEnany criticized Mrs. Pelosi for including a proposal that would provide aid to illegal immigrants.

“It’s not a serious offer,” she said. “What we’re talking about here is relief for the American people, for American citizens, not direct payments to illegal immigrants.”

She said the White House included $250 billion more for states and cities and more money for schools.

“It is a good proposal, but it’s one that she’s not interested in,” she said of Mrs. Pelosi.

Posted by theodore miraldi at 11:22 PM