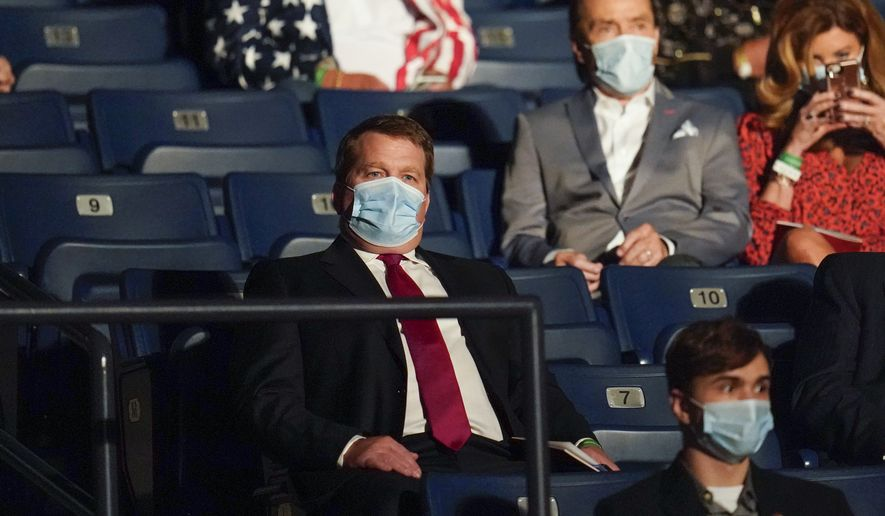 Tony Bobulinski, center seated, who says he is a former associate of Hunter Biden, waits for the start of the second and final presidential debate Thursday, Oct. 22, 2020, at Belmont University in Nashville, Tenn.

Hunter Biden’s former business partner is releasing a trove of text messages that show that former Vice President Joseph Biden was brought into discussions on his son’s China business ventures.

The texts from whistleblower Tony Bobulinski show Hunter talked of the “family brand” when discussing investments. Another partner warned Mr. Bobulinski “don’t mention Joe being involved. It’s only when u are face to face.”

Mr. Bobulinski suddenly emerged in the Hunter Biden financial scandal on Wednesday when he issued a statement saying he met with Mr. Biden, the Democratic presidential candidate, to discuss Hunter’s business ventures.

This adds to evidence casting doubt on Mr. Biden’s categorical statement that he has never discussed Hunter’s foreign businesses. They include being on the payrolls of Russian and Ukraine oligarchs and doing deals with wealthy Chinese close to the communist party and military.

The Hunter Biden scandal erupted earlier this month when Rudy Giuliani, President Trump’s attorney, began releasing emails and texts from Hunter Biden’s discarded MacBook Pro laptop. The messages show that an executive of Burisma Group, a Ukraine energy firm for which Hunter sat on the board of directors, thanked Hunter for setting up a meeting with the vice president in 2015.

Also, Devon Archer, Hunter’s principal business partner, arranged for a delegation in 2011 of top Chinese business leaders and communist party members to visit the Obama White House and meet with Mr. Biden, according to emails reported by Breitbart.

The Bobulinski texts, first reported by Fox News, show that Hunter Biden went on a tirade in a June 2017 message to partner James Gilliar with complaints about Mr. Bobulinski.

“Explain to me one thing Tony brings to MY table that I so desperately need that I’m willing to sign over my family’s brand and pretty much the rest of my business life,” Hunter Biden says. “Why in gods name would I give this marginal bully the keys my family’s only asset? Why?”

The “only asset” appears to be a reference to the Biden name, or Joseph Biden himself.

Mr. Bobulinski entered into partnership as CEO of Sinohawk Holdings with Hunter Biden and a Chinese billionaire, Ye Jianming, then chairman of CEFC or China Energy Co.

Mr. Bobulinski said the Senate report opened his eyes to the fact Hunter was secretly withdrawing huge sums of money from the partnership.

“I just saw behind the Biden curtain and I grew concerned with what I saw,” he said. “The Biden family aggressively leveraged the Biden family name to make millions of dollars from foreign entities even though some were from communist controlled China.”

Hunter Biden left his computer at a Wilmington, Del., repair shop in April 2019. With the computer abandoned, the shop owner became alarmed by its contents and notified the FBI, which took possession. He also provided a hard drive copy to Mr. Giuliani.

Another was a May 2017 email from Mr. Gilliar to Hunter Biden and Mr. Bobulinski on a new venture with Mr. Ye in which 10 percent stake would be “held by H for the big guy?”

Joseph Biden said at Thursday night’s debate with President Trump that Hunter has taken no money from China–––an assertion disproven by the Senate report.

The campaign says there are no Chinese proceeds on his tax returns.

A business partner informed Mr. Bobulinski that Hunter referred to his dad as “the chairman.”

Mr. Bobulinski wrote to Mr. Gilliar, “U need to stress to H, does he want to be the reason or factor that blows up his dad’s campaign, things need to be done right and protective of that fact.”

Posted by theodore miraldi at 12:50 PM