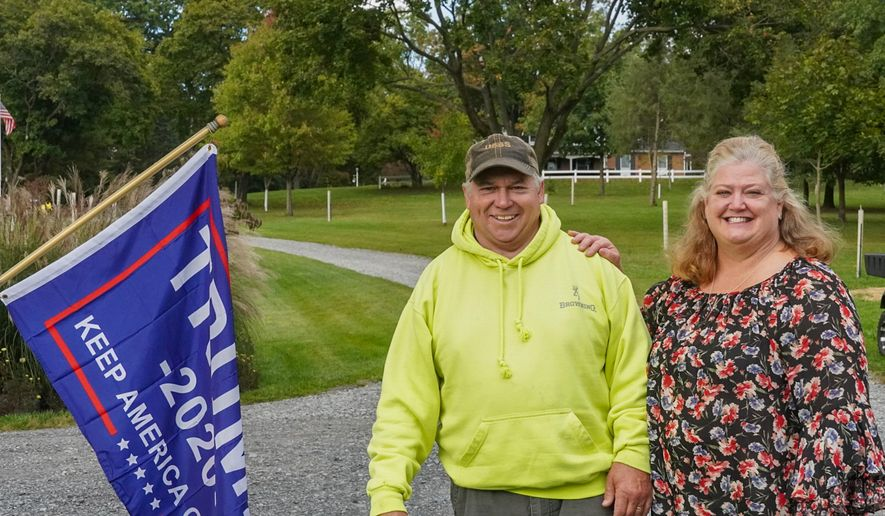 BREINIGSVILLE, Pennsylvania — Trump supporters Meg and Rich Schlauch say their way of life is at stake in the presidential election after a year of riots and anti-police rhetoric.

“I am praying that there is a huge silent majority, not minority, out there that is going to come and rise to the call,” said Mrs. Schlauch, a retired teacher whose property in rural Lehigh County is dotted with Trump banners and signs.

The Schlauchs are gun owners and members of the National Rifle Association. They say it has been a challenge to buy ammunition as gun sales soar.

“You can’t get ammo. We’ve tried,” Mrs. Schlauch said. “The line at Cabella’s is 2½ hours to even talk to somebody at the gun counter.”

Despite the unwavering support of Republican voters such as the Schlauchs, the latest poll shows President Trump losing ground in Pennsylvania’s 7th Congressional District, a moderate perennial swing region, compared with four years ago. A Morning Call/Muhlenberg College survey last week showed Democrat Joseph R. Biden leading the president in the district by 7 percentage points, 51% to 44%.

In 2016, Mr. Trump lost Lehigh and Northampton counties combined to Hillary Clinton by less than 1 point — fewer than 1,400 votes.

The Lehigh Valley this year is aligned with trends statewide, where Mr. Trump is trailing Mr. Biden by an average of 6.5 percentage points in the Real Clear Politics average of polls. Four years ago, Mr. Trump became the first Republican since 1988 to capture Pennsylvania’s 20 electoral votes. He won the state by 44,000 votes, less than 1% of the total.

“It’s a little bit better picture for Biden,” said Christopher Borick, director of the Muhlenberg College Institute of Public Opinion in Allentown. “It’s been a fairly steady lead, and potentially even creeping forward for Biden here. I think that’s part of the broader challenge for the president. He’s fighting fires on all kinds of fronts, but this is not the front he wants to be fighting.”

The poll was conducted before the revelation that Mr. Trump contracted COVID-19 and was hospitalized. Voters interviewed for this article generally said the development doesn’t change their minds about the election.

But one Republican operative in the Lehigh Valley who didn’t want his name used said the president’s illness “certainly is not helpful. It just highlights all the problems [with the virus].”

“Not too much, except a lot of prayer,” Mrs. Snover said. “Everybody’s still enthused, we’re still working just as hard. I hear people saying, ‘Hey, he fought for us. We’re going to fight for him.’”

Mrs. Snover is confident that the president will win her county again, but she predicts that the state will be “a dogfight.” As someone who knocks on doors and calls voters every day, Mrs. Snover said she doesn’t believe polls that show Mr. Biden with a significant lead.

“Trump people are completely secret. They whisper,” she said in an interview. “My right hand to God, they’ll open the curtain and say, ‘I can’t have a Trump sign. They’ll vandalize my home.’ I think there really is a closet vote for Trump. Republicans will not poll. They won’t do it. And the newly registered people have never voted before, which I think is bigger than 2016.”

The Schlauch family can relate to vandalism. They came home Saturday night to find the pole for their American flag snapped in half.

She said she will vote again for Mr. Trump because, “although he’s not a perfect person by any means, I do respect the fact that he calls a spade a spade. He doesn’t hold any punches back.

“He seems truly convinced that he can bring this country back,” she said. “He was certainly on the right path when the s– hit the fan with COVID. He was on such a wonderful trajectory with everything.”

Her husband, 60, a retired sales executive who has a Trump/Pence bumper sticker on his John Deere riding mower, said the president “has done everything that he said he would do.”

“When salespeople do what they tell you they’re going to do, their customers stick with them,” Mr. Schlauch said. “And I think that’s exactly what’s happened here. There may be hiccups along the road, things that make you cringe, things that he says, but that’s just the way it is. Those things do not amount to anything that would make me not vote for him.

“I honestly feel the life that we’re accustomed to, the country that we grew up in, is at risk,” in this election. “I don’t think there is any love for the country on the Democrat side anymore.”

Six-term state Sen. Lisa Boscola, a Democrat representing Northampton County, said this election year is unlike any other, between the pandemic and the social unrest.

“People are very emotional about this election,” she said. “Some people have lost friends, family members [from COVID].”

Noting the number of pro-police signs in her district, she said she believes the rioting this summer also will have an impact on the election, although she expects Mr. Biden to win Pennsylvania.

“There are people who are afraid,” Ms. Boscola said. “They see what’s happening in Philly and Pittsburgh and … they’re reacting. They’re like, ‘This is coming to the Lehigh Valley. We’ve been such a peaceful community.’ I’m like, ‘Wait a minute, there’s no evidence of that.’”

The Northampton County Republican Committee last month hosted Mark and Patricia McCloskey, the St. Louis couple who earned widespread attention for brandishing firearms as Black Lives Matter demonstrators walked through their neighborhood in June. The event at a park in the Lehigh Valley drew about double the expected attendance, Mrs. Snover said.

She said she has been encouraging Trump campaign officials to hold more events with the McCloskeys in front of suburban audiences.

“[The McCloskeys] said to me, ‘You have got to get us in front of suburban people.’ That’s our message. Our message is, ‘You can open your front door and 300 people are standing there. If you don’t have your individual liberty, your individual freedom and your right to bear arms …’”

She said of the McCloskeys’ local appearance, “You could have heard a pin drop. It was the most silence I’ve ever known at a large gathering like that.”

Still, Mr. Biden seems to have slightly more support in Pennsylvania than did Mrs. Clinton four years ago. Biden supporter Elsbeth Haymon of Allentown said she is voting against Mr. Trump more than she is voting for Mr. Biden but added, “I do really like the Biden-Harris ticket.

“Eight years in the White House with Obama has certainly given him the experience, as well as the Senate,” she said. “I like that he is not too far left because I want somebody who can win.”

She said if Mr. Trump wins a second term and Republicans hold the Senate, “it’s going to be a free-for-all.”

Pennsylvania Democrats say they are determined not to let another presidential election slip from their grasp after polls also showed Mrs. Clinton winning four years ago.

“I think there’s more of a comfort level with Joe Biden,” said state Rep. Robert Freeman, a Democrat from Easton. “I think he connects with people, particularly blue-collar voters who had been elusive when it came to voting for Hillary Clinton. I think he connects better than she was able to. And that means a lot.”