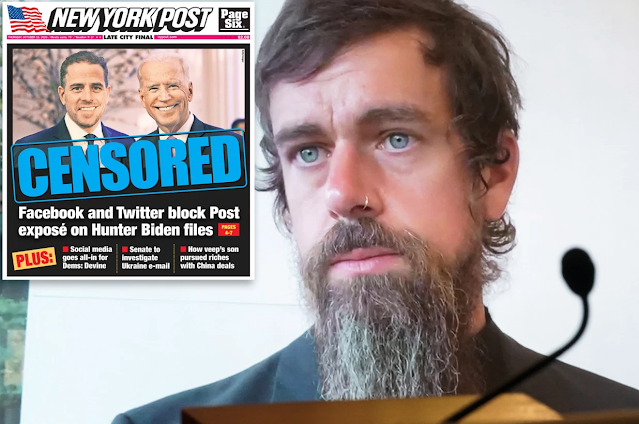 Twitter CEO Jack Dorsey on Wednesday falsely told senators that his company lifted a ban on users tweeting articles from The Post’s Hunter Biden exposé, despite the fact that the ban remained on one of The Post’s bombshell stories and was only lifted after he made the claim.

“Anyone can tweet these articles,” Dorsey told Sen. Ted Cruz (R-Texas) about The Post’s articles on emails implicating Democratic presidential candidate Joe Biden in his son’s work in China and Ukraine.

But Twitter users quickly noted that the social network still banned distribution of The Post’s article describing a business proposal in China involving Hunter Biden and a document indicating a 10 percent set-aside for “the big guy.”

“Jack Dorsey of Twitter just told Senator Cruz that anyone could now share the NY Post’s bombshell stories on Twitter. Dorsey is lying,” tweeted Abigail Marone, a rapid response official on President Trump’s re-election campaign, linking to a screen recording of the app blocking the post.

“Twitter is STILL blocking the URL for the NY Post story about the Biden’s foreign corruption & China dealings,” Marone wrote in a tweet shared by White House Press Secretary Kayleigh McEnany on her personal account.

Users were not able to share a link to the article on the proposed China business deal up until just hours ago, which last week was corroborated by former Hunter Biden business partner Tony Bobulinski.

“Something went wrong, but don’t fret — let’s give it another shot,” an error message informed Twitter users.

Twitter said of the article: “We can’t complete this request because this link has been identified by Twitter or our partners as being potentially harmful. Visit our Help Center to learn more.”

Dorsey claimed repeatedly in his testimony that Twitter had lifted its ban on sharing The Post’s articles, which Twitter initially censored under a “Hacked Materials” policy, despite no evidence the records were hacked.

“Our team made a fast decision. The enforcement action, however, of blocking URLs, both in tweets and in DM direct messages we believe was incorrect and we changed it,” Dorsey claimed.

Hunter Biden has not denied providing the laptop to a Delaware computer repairman, whose identity The Post confirmed before publication, and Bobulinski came forward last week to corroborate allegations that Joe Biden was aware of and involved in his son’s dealings. The repairman says Hunter Biden never retrieved the laptop from his store and provided evidence of a contract saying the equipment would be legally abandoned after 90 days.

The Post’s account was locked down after an initial article on Hunter Biden emails indicating then-Vice President Joe Biden met with an executive at Ukrainian energy company Burisma, despite claiming last year he never spoke with his son about his “overseas business dealings,” including a reported $83,000 a month job on Burisma’s board. Sharing that article is now possible on Twitter.

Posted by theodore miraldi at 2:11 PM