US Economic Growth SHATTERS Record at 33.1% 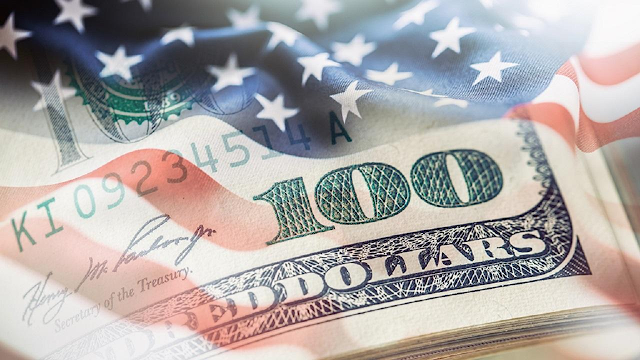 The U.S. economy grew at a record-shattering pace in the third quarter as businesses reopened from the coronavirus shutdown, but the nation remains in a deep hole from the COVID-induced recession.

Gross domestic product, the broadest measure of goods and services produced across the economy, surged by 33.1% on an annualized basis in the three-month period from July through September, the Commerce Department said in its first reading of the data Thursday. The previous post-World War II record was a 16.7% increase in 1950.

Refinitiv economists expected the report to show the economy had expanded by 31%.

But the headline figure obscures the full picture: The economy contracted at an annual revised rate of 31.4% in the previous quarter, the sharpest decline in modern American history. Looking at the quarterly data, the nation's GDP grew 7.4% from the second to the third quarter, compared with a 9% decline between the first and second quarters.

TRUMP COULD CUT TAXES BY $1.1T OVER NEXT DECADE IF REELECTED, STUDY SHOWS

"The economy in the third quarter will still be far below what it was pre-COVID, so far below that the depth of the recession even after that record growth will still be as a deep as a very deep recession, like the 2008 recession," Justin Wolfers, a University of Michigan economist, told FOX Business before the latest data.

The Commerce Department calculates the GDP on a quarter-over-quarter basis as if that level of growth were sustained for a full year; in times of huge swings up or down, it can exaggerate both the decline in growth and the subsequent rebound.

Because the third quarter is measured against the second quarter -- a historically low baseline -- any bounceback at all would appear huge. The U.S. economy came to a near standstill earlier this year to slow the spread of the novel coronavirus, which has infected more than 9 million Americans and killed over 227,000, the most in the world.

"Even though this quarter’s GDP came in relatively strong, we have to keep in mind that this grade comes on a big curve – this is really a benchmark against the drastic hole we started to climb out of in [the second quarter]," said Steve Rick, chief economist at CUNA Mutual Group.

Still, the Trump administration took a victory lap on the GDP figure, touting it as "absolute validation of President Trump's policies, which create jobs and opportunities for Americans in every corner of the country."

"The President built the world’s best economy once and he’s rapidly doing it again, proving that cutting taxes and reducing regulations and red tape clear the way for American ingenuity and our entrepreneurial spirit to thrive," Tim Murtaugh, communications director for the Trump 2020 campaign, said in a statement.

The economy's coronavirus-induced swoon, illustrated in the previous quarter's decline in GDP, undercut once-vibrant growth that had been a key plank of the president's re-election bid. On the campaign trail against Democratic challenger Joe Biden, Trump has told voters that the economy has already begun to bounce back from the decline but only he can completely restore it.

The third-quarter growth reported Thursday was spurred by a resurgence in consumer spending, which accounts for roughly two-thirds of the nation's GDP, as states eased shutdown measures over the summer and employers rehired workers. Personal consumption increased by 40.7%, a record, last quarter. Business investment and housing also posted strong gains.

But economists worry that growth is starting to plateau in the final three months of the year amid a spike in new COVID cases and the lack of another round of government relief. (In Europe, surging infection rates led to a fresh round of restrictions).

For months, Congress has struggled to reach an agreement on another round of emergency relief for families and businesses — negotiations first collapsed in early August, prompting Trump to sign four executive measures intended to provide relief to families still reeling from the virus-induced crisis, including temporarily extending supplemental jobless aid at $300 a week.

But that aid is beginning to expire, and lifelines that propped up the economy in the early weeks of the pandemic — like the $670 billion Paycheck Protection Program, a one-time $1,200 stimulus check and sweetened unemployment benefits — lapsed months ago.

On top of that, millions of laid-off workers could lose their jobless benefits altogether by the end of the year, with the enhanced unemployment benefits that Congress approved in March set to expire on Dec. 31.

"We’re in dire need of additional fiscal stimulus to help build a bridge for people to get through this recession and combat accelerating financial distress," Rick said.

Posted by theodore miraldi at 10:40 AM