'Said No Such Thing' 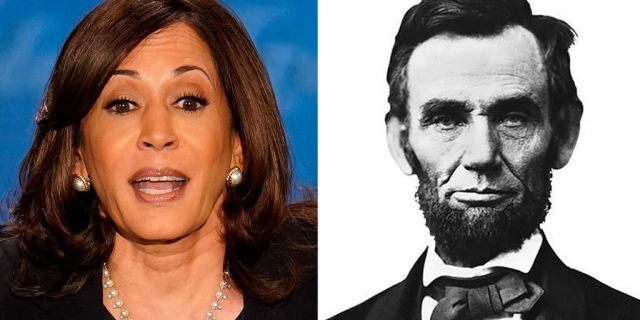 During a heated exchange with Vice President Mike Pence on the confirmation Judge Amy Coney Barrett to the Supreme Court, Harris suggested that one of the most revered Republican presidents would be in favor of allowing a newly-elected president to fill a vacant seat instead of rushing a confirmation in the heat of an election in response to Pence's argument that President Trump's appointment is following precedent.

“I’m so glad we went through a little history lesson. Let’s do that a little more,” Harris told Pence. “In 1864... Abraham Lincoln was up for reelection. And it was 27 days before the election. And a seat became open on the United States Supreme Court. Abraham Lincoln’s party was in charge not only of the White House but the Senate. But Honest Abe said, ‘It’s not the right thing to do. The American people deserve to make the decision about who will be the next president of the United States, and then that person will be able to select who will serve on the highest court of the land.’”

WASHINGTON POST'S MEGAN MCARDLE KNOCKS GENDER DEFENSE OF HARRIS: 'PENCE IS ACTUALLY A GOOD DEBATER,' SHE 'IS... NOT'

Well, according to a report from The Washington Post on Thursday, Harris did not accurately describe what took place under Lincoln when filling the vacant seat of Chief Justice Roger B. Taney.

"Harris is correct that a seat became available 27 days before the election. And that Lincoln didn’t nominate anyone until after he won," the Post wrote. "But there is no evidence he thought the seat should be filled by the winner of the election. In fact, he had other motives for the delay."

According to Lincoln historian Michael Burlingame, Lincoln told his aides he wanted to delay his Supreme Court confirmation process because he was “waiting to receive expressions of public opinion from the country," though the Post noted, "that didn’t mean he was waiting for ballots so much as the mail."

"The overarching effect of the delay is that it held Lincoln’s broad but shaky coalition of conservative and radical Republicans together," the Post explained. "Congress was in recess until early December, so there would have been no point in naming a man before the election anyway. Lincoln shrewdly used that to his advantage. If he had lost the election, there is no evidence he wouldn’t have filled the spot in the lame-duck session."

The Post concluded, "So Harris is mistaken about Lincoln’s motivations in this regard."

"Lincoln, of course, said no such thing," McLaughlin refuted the Democrat Wednesday night. "He sent no nominee to the Senate in October 1864 because the Senate was out of session until December."

Posted by theodore miraldi at 7:35 AM