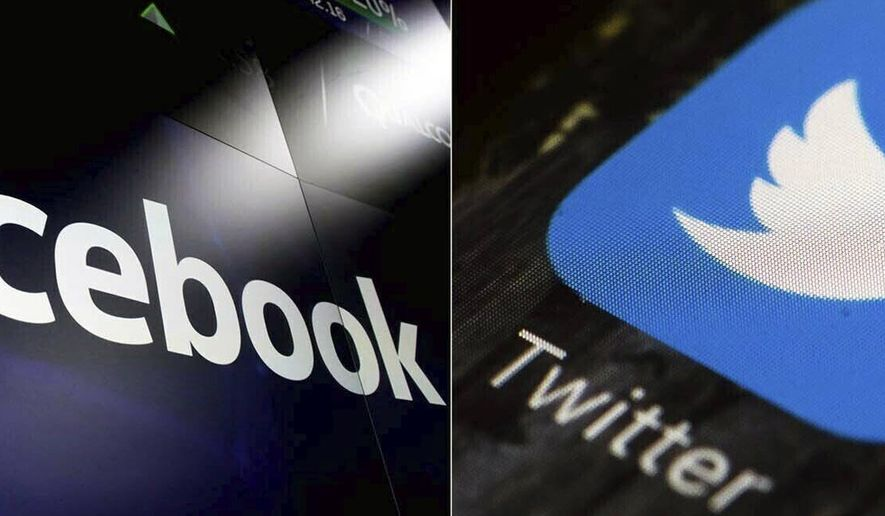 FILE - This combination of photos shows logos for social media platforms Facebook and Twitter. Facebook and Twitter moved quickly this week to limit the spread of a disputed tabloid story promising new twists in the saga of Joe Biden’s relationship with Ukraine. President Donald Trump's campaign quickly seized on the story in the New York Post — but the report raised more questions than answers, including about the authenticity of an email at the center of the story. Wednesday morning Oct. 14, 2020, hours after the story's publication, a Facebook spokesman tweeted that the company was limiting its distribution on the platform.(AP Photo/File)

Some disasters arrive with the suddenness of an avalanche with no time to react, while others are preceded by a flashing early-warning sign. Americans are shocked by blatant censorship of news relevant to the impending 2020 presidential election, but they shouldn’t be. Unsavory political bias has been a growing phenomenon in the electronic public square. With millions of votes already cast, efforts to release the subversive grip on free speech are too little, too late.

The Hunter Biden revelations comprise an epic October surprise with the potential of tarnishing Mr. Biden’s image weeks before his Election Day faceoff against the Republican president. But Twitter and Facebook chose to block users from linking to the story, effectively forcing readers to engage in a game of online hide-and-seek to read it.

Nowhere is media bias more jarring than in social media. Originally envisioned as an electronic equivalent of the town square, many online platforms have abandoned objectivity by favoring progressive content and installing so-called fact checkers to weigh — and sometimes censor — countervailing material, like the Biden laptop story.

Facebook CEO Mark Zuckerberg has warned against fact-checking politicians, but with his former subordinate Jessica Hertz joining Twitter executive Carlos Monje on the Biden transition team, the temptation to put a thumb on the Democrats’ side of the scale is apparently irresistible. Mr. Zuckerberg, along with Twitter CEO Jack Dorsey, has been fingered to explain the suppression of the New York Post story before the Senate Judiciary Committee, either voluntarily or by means of subpoena.

For Mr. Trump, whose press coverage is consistently ranked at 90% negative, Senate chat-fests are not enough. The president on Tuesday called on U.S. Attorney General William Barr to appoint a special counsel to probe whether the Biden laptop reveals illicit corruption. Meanwhile, Federal Communications Commission Chairman Ajit Pai is composing tightened provisions for Section 230 of the Communications Decency Act of 1996, which was meant to immunize online platforms from liability for objectionable content. Current rules have been abused, says the White House, by those who “in reality use their power over a vital means of communication to engage in deceptive or pretextual actions stifling free and open debate by censoring certain viewpoints.”

Sadly, censorship warning lights were not heeded in time to halt subversion of Election 2020. When smoke from the current political battle clears, the nation will discover whether its reverence for free speech still stands.

Posted by theodore miraldi at 1:09 PM