After Years of Democrats' Lectures, It Turns Out That HATE Wins

Opinion warnings before burning in hell 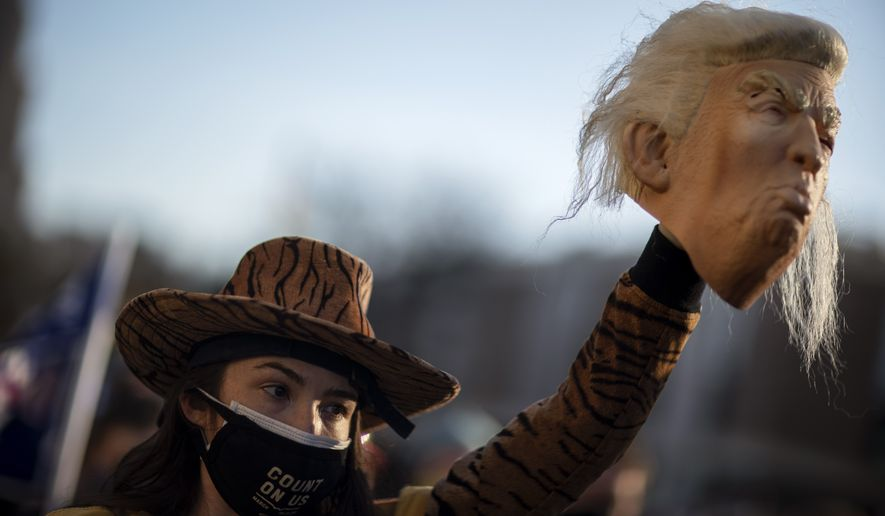 A mask of President Donald Trump is carried in a march celebrating the election results in Detroit, Saturday, Nov. 7, 2020. (AP Photo/David Goldman)

After four years of these people lecturing us about how “Love Wins” and “Love Trumps Hate,” it turns out that hate really does win.

At least for these people.

About 140 million Americans — including some number of dead people, more than a few electronic “glitches” and possibly some aliens as well as invisible voters — showed up to vote in this year’s election. Roughly half of them showed up because they LOVE President Trump.

The other half was motivated entirely by pure hatred for Mr. Trump.

Hatred that was largely manufactured by Democrats and the media and meticulously — extravagantly — cultivated with mountains of lies and fake conspiracies these past four years.

And that’s OK. That is how free elections sometimes work.

But please just spare us the lecture about how virtuous you are because “Love Wins” or “Love Trumps Hate.”

In Michigan, election canvassers refuse to certify the results in Wayne County because — mysteriously — there were more ballots tabulated than there were voters who showed up at the polls.

No, they were pilloried and bullied as “racist” because Wayne County includes the city of Detroit, which is mostly Black.

“You have extracted a Black city out of a county and said the only ones that are at fault is the city of Detroit, where 80% of the people who reside here are African Americans,” frothed the powerful Rev. Wendell Anthony. “Shame on you!”

So — in other words — you don’t have a reasonable explanation for why there were more ballots than there were voters?

“The Trump stain, the stain of racism that you, William Hartmann and Monica Palmer, have covered yourself in, is going to follow you throughout history,” he spat.

“You will forever be known in southeastern Michigan as two racists who did something so unprecedented that they disenfranchised hundreds of thousands of Black voters in the city of Detroit — because they were ordered to!” he screamed, without evidence.

He said their grandchildren will denounce them as Bull Connor and George Wallace.

Then he got really serious and threatened that “millions around the world now on Twitter” believe Ms. Palmer and Mr. Hartmann are “completely racist” and without “integrity” or “human decency.”

He then told them that they are going to hell where their souls will be “very, very warm.”

Nothing says “love” like telling someone — without any evidence — that they are racist. Their grandchildren will hate them. And that they will die and burn in hell.

Where do such animals come from? What kind of sick, miserable lives create this kind of hatred?

Meanwhile, elsewhere on Twitter, Mr. Trump dispatches messages. It is the best he can do to get around the deranged, hate-filled media.

Twitter is so filled with love that they now attach disclaimers to all of Mr. Trump‘s messages. “!This claim about election fraud is disputed,” Twitter claims, deploying strange half-Spanish punctuation at the beginning of the sentence, but not at the end. New world order, I guess.

“Voter fraud in Detroit is rampant, as has been for many years!” Mr. Trump wrote.

Twitter attached their dispute claim to the bottom of the president’s message, yet provided exactly no evidence whatsoever of anyone claiming that voter fraud, in fact, does not exist in Detroit.

That is because no serious person would ever claim that voter fraud does not exist in Detroit. Whether it is “rampant” or not is a matter of pure opinion.

But in this world, even opinions require warnings. If this is how they treat the president of the United States, just think what they will do to you.

Posted by theodore miraldi at 1:04 PM