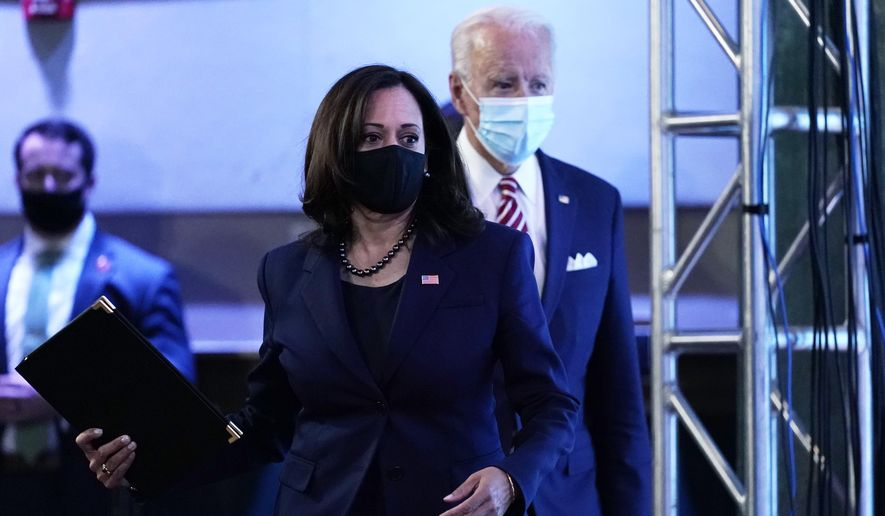 What kind of people have to be hectored into issuing a weak, petulant sentence about violence exacted upon their political opposition?

The Biden/Harris team and Democratic leadership, that’s who.

Saturday, Nov. 14 was a day of tens of thousands of President Trump supporters peacefully (completely, not “mostly”) at the “MAGA March,” in Washington, D.C. Marxist Black Lives Matter and Antifa were there, too, but outnumbered, but when the crowd began to disperse did those usual suspects show up and proceeded to harass, threaten and exact violence against those simply showing support for the president.

This was not a new scene. Supporters of Mr. Trump have faced verbal, emotional and physical assaults throughout his presidency, in addition to attempts by media to destroy the lives of others, like Covington kid Nick Sandmann. Whether it be adults getting screamed at in restaurants, being attacked for their support of the president, to children being assaulted by adults and other children for wearing Trump 2020 hats, Democratic political violence has become commonplace.

Ironically, the Biden/Harris campaign laughably made calls for “unity” a cornerstone of their campaign, as they pledge to “heal the soul of the nation.” This, as video from the MAGA March of BLM, Antifa and Black Box anarchist assaults on families, older Americans and Trump supporters in general, went viral on social media.

In one case, an older man walking alone was sucker punched from behind by a masked rioter. When the victim fell face first on the cement another masked rioter came up to kick him in the head. Video of a young family being hounded, threatened and terrified was shared on social media, as well as footage of diners at a D.C. restaurant being shot at with fireworks, exposed the obscene and repugnant acts usually reserved for banana republics run by leftist maniacs.

Most people only knew this was happening because it was shared on social media platforms. The legacy media for the most part ignored these events, like they ignore the continuing violence in Democratic cities across the country.

For 48 hours not a peep was heard from the Biden/Harris campaign about supporters of the president being physically attacked that Saturday afternoon. Maybe they were too busy crafting more media blurbs about unity.

Only after being criticized by commenters on television and throughout social media, did Joe Biden’s campaign office finally respond, sort of.

Responding to a Fox News request for a statement, Mr. Biden’s spokesman issued this terse and petulant statement: “President-elect Biden continues to denounce all acts of violence. Likewise, he also condemns the repugnant displays of white supremacy that were made in Washington, D.C. this weekend.”

And why the effort to deflect by mentioning what was reported as a sign carried by someone in a crowd of tens of thousands? Placards with offensive statements should be condemned, but why use it to distract from physical violence against the innocent? Or is the Biden team implying Trump supporters are the type who deserve to be attacked?

Just the day before, in her standard sanctimonious style, Kamala Harris tweeted this: “Now the hard work, the necessary work, the good work begins to unite our country and heal the soul of our nation.” Once again selling “unity,” while implying their opponents harmed the soul of the nation.

People in cities under siege like Seattle, Portland and Minneapolis suffer as their mayors and/or governors placate, and even sometimes embrace, the mayhem. The Minneapolis City Council embraced the “defund the police” agenda, and the horrific results have compelled residents to sue the city.

In late October, “Several Minneapolis residents went to court … where they sued the city for failing to adequately staff police amid a rise in violent crime, WCCO reported Tuesday. ‘Every single night on any block in this neighborhood you can hear gunshots!’ plaintiff Cathy Spann said, according to WCCO. ‘Every single freaking night!’” reported The Federalist.

Even during the general election season, neither former Vice President Biden nor Sen. Harris used their considerable influence to demanding an end to this abject violence terrorizing innocent citizens. Instead, Ms. Harris endorsed and promoted a group that raised money to bail out rioters. It was reported some of Mr. Biden’s campaign staff did the same.

Only when polls came out indicating that voters across the country were appalled and concerned about safety, and the unfolding riots and violence would affect their vote, did Mr. Biden emerge from his basement and someone on his team bothered to draw up a generic statement condemning “all violence.”

The issue is not condemning violence in general. Most people do. The issue confronting Democratic leadership, including Biden/Harris, is condemning political violence by these specific groups applied against those who are perceived as political opponents.

It’s telling they find that too high a mountain.

Of all the things Americans are learning through the Democratic Party’s hypocrisy and coy remarks about political violence, is when the Democrats patronizingly speak of unity what they really mean is submission.