DIVISION, Not Unity, Will Mark America 2021 and Beyond 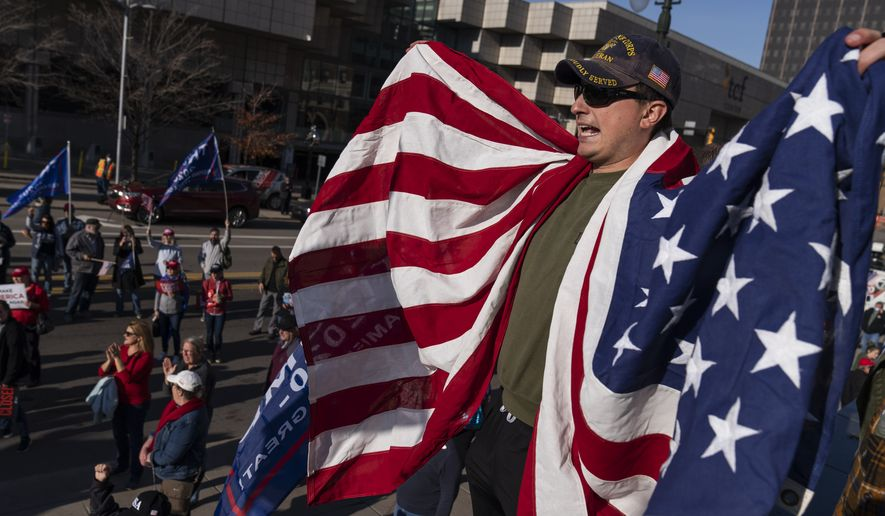 Trump supporter Michael Foy is draped in an American flag during a protest against the election results outside the central counting board at the TCF Center in Detroit, Friday, Nov. 6, 2020. (AP Photo/David Goldman)

No matter which party controls politics in January, the year 2021 will be marked by national disunity and discord.

It’s because of that whole “Democrats hate America” thing.

“We need to be pretty clear,” Spanberger said, of the election results, in a leaked record of the call as reported in The Daily Mail. “It was a failure. It was not a success.”

And she added this, Politico reported: “We lost incredible members of Congress. No one should say ‘defund the police’ ever again. Nobody should be talking about socialism.”

And she capped with this, speaking of future elections and the Democrats’ chances, if moderation doesn’t come: “We will get f—ing torn apart.”

So what does Nancy Pelosi say to all that?

“I do disagree, Abigail, that it was a failure,” the speaker said. “We won the House.”

And with that, all expectation, all likelihood, all chance of Democrats to tone down the socialism and adopt a calmer, cooler, more constitutional agenda come the new year went right out the window.

Democrats aren’t going to slow the roll on their collectivist agenda.

Democrats aren’t going to ratchet down the calls for abolishing police, abolishing law and order, abolishing the very tenets of American governance — that is to say, the Constitution, the concept of limited government, a capitalistic system.

They’re only going to grow louder, bolder, more insistent, more petulant with their overreaching demands. How do we know this to be true?

Tom Perez, Democratic National Convention chief, made clear in 2018 that card-carrying socialist Rep. Alexandria Ocasio-Cortez is the “future of our party.”

And whispered for a Biden Cabinet and administration were the likes of socialist Bernie Sanders, leftist-progressive Elizabeth Warren, “I am zee law” tyrant Gov. Gretchen Whitmer.

There’s nothing in there that says the Democrats could quiet the radicalism.

“Capitalism is killing us, fight for a socialists alternative,” read one sign carried by this week’s protesters in Philadelphia.

Given freedom loving Americans won’t stand idly by and let their country be collapsed by radical leftists from within, the reality — the guaranteed reality — is this: 2021 is going to be filled with political and societal rife. Yes, 2021 and no doubt, beyond.

It’s not a fight over political seats.

It’s a fight for the very soul of our nation.

Posted by theodore miraldi at 7:24 AM