EDITORIAL: Why We Enthusiastically ENDORSE Donald J. Trump for Reelection 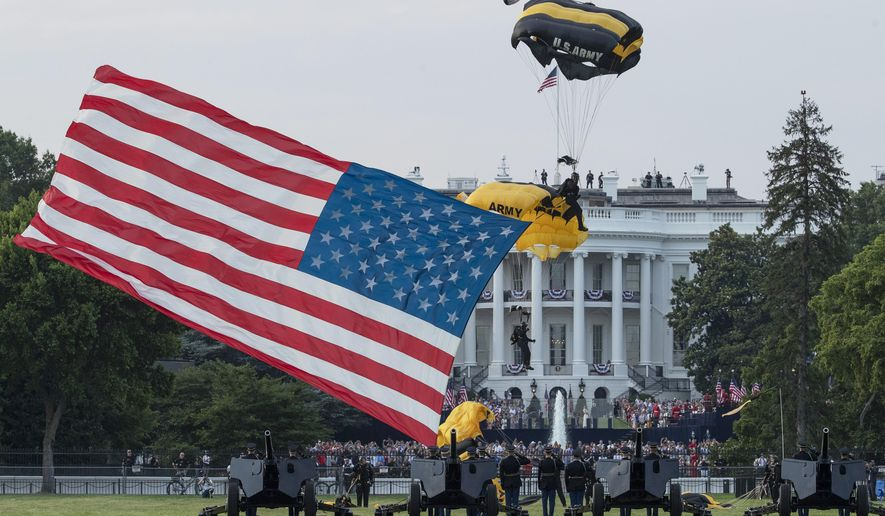 President Donald Trump and first lady Melania Trump watch as the U.S. Army Golden Knights Parachute Team descend during a "Salute to America" event on the South Lawn of the White House, Saturday, July 4, 2020, in

Four years ago, Donald J. Trump presented himself to the American people as a brash, vulgar, gold-plated reality star seeking a political career in which he promised to bounce the entrenched Washington political set off the ropes of a pro wrestling ring and pound them into the canvas. It all seemed so self-serving and absurd.

Sure, he had built a massive real estate empire and lent his name to gleaming skyscrapers. But he had no track record whatsoever in the political world. We had no reason to trust that Mr. Trump would be a good steward of the economy, a fierce defender of our homeland or even a protector of our most cherished constitutional liberties.

For the first time since our founding in 1982, this paper declined to endorse anyone in the 2016 presidential election.

“The stakes are exceptionally high,” we noted a week before the election. But we left it to the “native wisdom” of the people to choose between two flawed candidates.

Today, four years later, Mr. Trump has endured the tumult of our times to build a clear track record in key areas worth reviewing:

President Trump has enabled, encouraged, and laid the necessary groundwork for the best economy in 40 years.

In 2019, the labor market was the strongest in modern times. The largest number of Americans (159 million) were employed ever. The U.S. had the lowest unemployment rate in 50 years (3.5%) and had record or near record high employment rates for Blacks, Hispanics, Asians, women, high school grads, the handicapped, and veterans.

Mr. Trump came to office with a clear understanding that trade and immigration policies over the last 40 years had worked to destroy manufacturing in the United States and to offshore jobs or suppress the wages paid to American workers.

He cancelled the Trans-Pacific Partnership agreement, renegotiated NAFTA, and created the USMCA, and has not hesitated to engage other nations — especially China — with tariffs when necessary.

With respect to immigration, it is safe to say that Mr. Trump is the first President ever to take enforcement of our immigration laws seriously.

He has shrunk, rather than expanded, American involvement in nettlesome and pointless conflicts.

He took swift and decisive action against adversaries such as Qassim Soleimani and Abu Bakr Al-Baghdadi, who were responsible for killing Americans and destabilizing the Middle East.

Mr. Trump’s leadership has resulted in Arab nations normalizing relations with Israel, the most significant breakthrough in the Middle East since the end of World War II.

He rebalanced military alliances that had become over-reliant on American power and American contributions.

He rebuilt a military struggling after 15 years of nonstop combat.

He rejuvenated NASA, reemphasized the necessity of American space efforts, and created the Space Force.

Mr. Trump has remade the federal judiciary with constitutionalist judges and justices who understand their proper role in our balance of power. More than 215 judges have been nominated and confirmed, including 3 Supreme Court judges.

There are now a majority of judges appointed by Republicans in seven of the 13 federal appellate circuits.

If the president is given another four years, the likelihood is that by 2025 there will be a majority of Republican-appointed judges in all 13 circuits.

The provisions of this reform — lower corporate tax rates, expensing, and eliminating penalties for repatriating cash — have been essential in improving the economy of the nation and the personal prosperity of its citizens. Individual taxpayers were helped by the elimination of Obamacare’s individual mandate, as well as the reduced deductibility of state and local taxes, which means that residents from well-functioning, low-tax States no longer subsidize residents of high-tax, poorly-run states.

Mr. Trump changed the regulatory regimes in areas as different and important as automobiles, telecommunications and environmental improvement.

His efforts have preserved Americans’ choices in determining what is best for them, saved households hundreds of dollars in regulatory costs each year, ensured energy independence, and reduced the intrusion of the government in the lives of American citizens.

Mr. Trump has done more for the Black community than any president since Johnson.

Criminal justice reform, permanent funding for Historically Black Colleges and Universities HBCUs, and the creation of Opportunity Zones work to ensure an America in which everyone has the opportunity to excel.

In just the past year alone, Mr. Trump has faced an unprecedented array of catastrophes, any one of which could have sunk his presidency — none more frightening than the global pandemic, which began while Washington was ground to a halt by a hotly partisan and unjustified impeachment trial.

By every metric, the president has met the challenge as best as possible. He took swift action to delay the onslaught of the virus. He made difficult decisions to slow the spread, giving hospitals crucial time to prepare. He utilized federal powers and resources to ramp up testing and provide necessary medical equipment and develop therapeutics that have massively lessened the mortality rate of the plague.

President Trump’s record is not the only thing on the ballot to consider. It is worth noting a few things about his opponent.

Former Vice President Joe Biden has been in Washington for 47 years. His record is even clearer than Mr. Trump‘s. As troubling as that record is, Mr. Biden’s current campaign is even more troubling.

He has made clear that he intends to impoverish wide swaths of the United States by abandoning the affordable energy provided by oil and natural gas — a gambit sure to threaten the entire U.S. economy.

He promises to raise taxes on not only the wealthy but on corporations and pretty much anyone with a job.

He refuses to explain to voters if he plans to make good on Democrat threats to pack the Supreme Court in an effort to undo all of Mr. Trump’s accomplishments on the federal judiciary.

Finally, he seems insistent on playing hide the ball with respect to his family’s involvement in China and Ukraine.

Has Mr. Trump been perfect? No. This is, after all, politics. But his record of achievement in his first term is unmatched by any president in modern times. A second term is likely to bring more successes and a stronger America.

For these reasons, we enthusiastically endorse Mr. Trump for reelection.

Posted by theodore miraldi at 10:11 AM