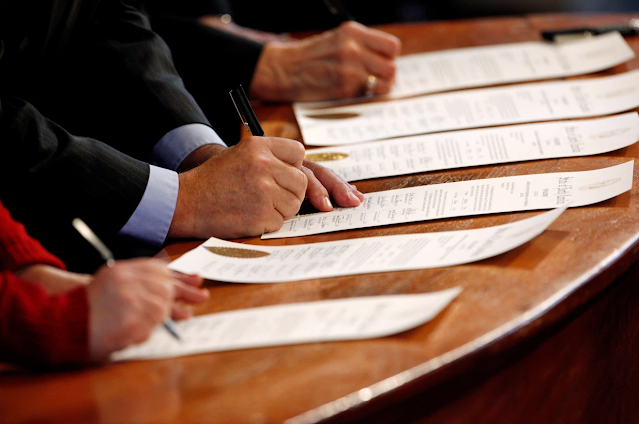 Remember “faithless electors” — those almost mythical rogues who Hillary Clinton fans once desperately hoped could save them from a victorious Donald Trump four years ago?

Well, there is still such a thing as faithless electors, they are still an incredible longshot, and Trump fans too can now place the very slimmest of hopes in them.

So what are faithless electors again?

As a refresher, when we fill in those ballot ovals to select a president, we are actually selecting a slate of “electors,” human beings who are bound to vote for a particular party’s candidate when they meet next month in their respective state capitals.

For example, the president won Florida’s 29 electoral votes on Tuesday night after a majority of voters there, more than 5.6 million people, filled in the oval for President Donald Trump and Vice President Mike Pence.

But those millions of Floridians were actually voting for their state’s Republican “electors” — 29 party loyalists chosen by their state GOP leaders.

“When a voter casts a vote for a candidate for President of the United States, s/he is in actuality casting a vote for the presidential electors who were selected by that candidate’s party,” as the National Conference of State Legislatures explains.

All 29 of Florida’s electors are bound to vote for Trump and Pence — and will head to Florida’s statehouse and cast their pledged vote for the GOP ticket on Dec. 14.

The same scenario will play out across the country — in New York, for instance, which also has 29 Electoral College votes and which was easily won by Joe Biden and Kamala Harris.

As in Florida, on Dec. 14, New York’s 29 electors — loyalists chosen by state Democratic leaders — will dutifully report to Albany. They’ll cast their votes for Biden-Harris.

As a formality, Congress will then meet in joint session on Jan. 6 for the official tally of the Electoral College votes.

That’s what is supposed to happen — and what almost always does, without a hitch or surprise.

But that’s where “faithless electors” could come in — rogues who vote for someone else, or who abstain entirely.

It’s happened 85 times in America’s history, according to Fairvote.org, which advocates for the abolishment of the Electoral College.

That number includes three electors who abstained. “The other 82 Electoral votes were changed on the personal initiative of the Elector,” Fairvote.org says.

Most of the faithlessness happened long ago, when there was a mass defection in 1836, for example, and 23 Virginia electors revolted.

But it has happened as recently as 2016, when 10 electors went rogue — and seven of those votes actually stuck.

Trump lost two electoral votes that year. But Clinton lost five — in any event not enough to alter what happened at the polls, as Fortune.com notes.

It happened again in 2004, when one Minnesota elector declined to vote, as pledged, for Democrat John Kerry and instead voted for Kerry’s running mate, John Edwards.

That bit of lone roguishness had also no bearing on the election, as the incumbent Republican president, George W. Bush, had already handily won.

There would be either zero penalties or only the lightest wrist-slap should electors abstain or go rogue.
But to change the 2020 presidential election, multiple electors would need to do so — enough to flip the Electoral College balance — and America has never even come close to seeing that happen.

And even then, Congress would have to approve the changed tally, perhaps the highest hurdle of all, given that the House remains controlled by Democrats.

Posted by theodore miraldi at 4:48 PM