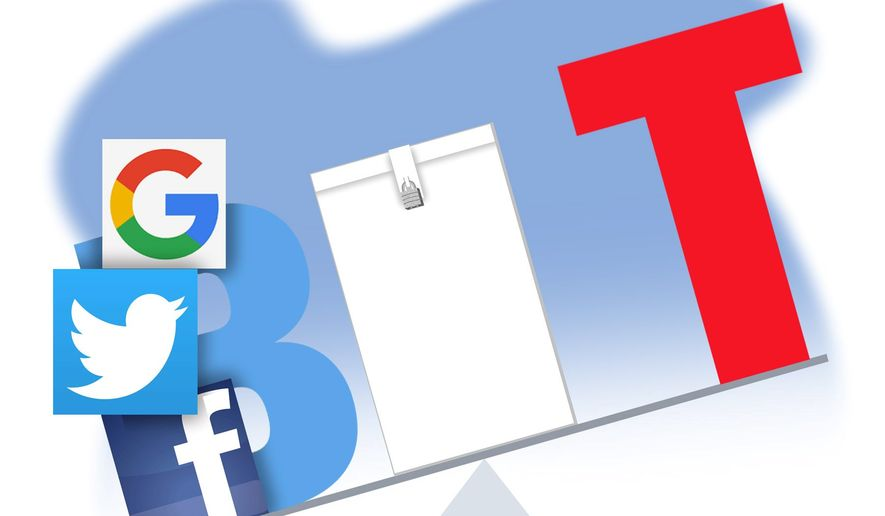 Illustration on rigging the election by Alexander Hunter

While President Trump’s attorneys continue to challenge the validity of bizarre tallying, anyone interested in free and fair elections should consider the role of Big Tech.

Regardless of the extent of vote fraud, Google, Facebook and Twitter fixed the election for Joe Biden over President Trump. There should be no doubt in any honest observer’s mind.

Undercover operatives for Project Veritas caught a Google executive on camera last year boasting that only Google could prevent “the next Trump situation.”

Twitter blatantly kept the public from crucial information less than a month before the election by suspending The New York Post’s entire site over its blockbuster articles exposing the Biden family’s lucrative contracts in Ukraine and with Communist China.

Twitter CEO Jack Dorsey admitted after the election that this probably wasn’t the right thing to do. Surveys indicate that enough voters to easily make a difference would not have chosen Mr. Biden if they had known about the colossal corruption. Thanks, Jack. We expect the Biden team will offer you an appropriate form of gratitude.

But something even more powerful in Silicon Valley was afoot than straightforward censorship.

For years, behavioral psychologist Robert Epstein has warned that Google, which accounts for more than 90% of Internet searches, can easily determine elections by adjusting algorithms to favor one party over the other. Given that most people see only the first few entries on a search, the rest might as well be invisible.

“Google’s search algorithm can easily shift the voting preferences of undecided voters by 20 percent or more — up to 80 percent in some demographic groups — with virtually no one knowing they are being manipulated,” he wrote in 2015 in Politico Magazine, basing his calculations on experiments he conducted along with Ronald E. Robertson.

They showed how the Search Engine Manipulation Effect (SEME) works in a study published in the Aug. 4, 2015, edition of Proceedings of the National Academy of Sciences.

After five experiments conducted with more than 4,500 participants in the United States and India, they concluded that SEME “can shift the voting preferences of undecided voters … and search ranking bias can be masked so that people show no awareness of the manipulation.”

In July 2019, Mr. Epstein, a Democrat with a Harvard Ph.D., warned Congress that this was a real threat to election integrity and that Google may have shifted 2.6 million votes to Hillary Clinton in 2016. He said that in the 2020 election, SEME could shift as many as 15 million votes from Mr. Trump to Mr. Biden.

On Nov. 24, Mr. Epstein told FOX News’ Tucker Carlson that he believed the SEME technique had cost Mr. Trump this time a “bare minimum” of at least 6 million votes. He said he had 733 field agents in three swing states — Arizona, Florida and North Carolina — and that his team recorded more than 500,000 “experiences,” such as voting reminders sent to some on Google but not to others.

“We found a period of days when the ‘vote’ reminder on Google’s home page was being sent only to liberals. Not one of our conservative field agents received a vote reminder during those days.” After he blew the whistle on this, he said, Google began sending the “vote” reminder to everyone.

But, recall that we had an unprecedented amount of early voting, with more than 100 million ballots cast before Election Day out of 156.8 million. The damage could already have been done.

On Oct. 31, Mr. Epstein told Tucker Carlson that “just based on the first 150,000 searches that we’ve looked at, and that’s about 1.5 million search results and over a million web pages, we’re finding very substantial pro-liberal bias in all 10 or at least nine out of 10 search results on the first page of Google search results – not on Bing or Yahoo, though.”

Vote manipulation using technology isn’t new. Rutherford B. Hayes, a Republican, won the 1876 presidential election over Democrat Samuel J. Tilden at least in part because of support from Western Union. At the time, Western Union had a virtual monopoly on communications and “the company did its best to assure that only positive news stories about Hayes appeared in newspapers nationwide,” Mr. Epstein wrote. “It also shared all the telegrams sent by his opponent’s campaign staff with Hayes’s staff.”

The election dragged on for weeks, with both sides charging vote fraud or voter suppression. In a retrospective article, The Washington Post’s Ronald G. Shafter wrote, “Much as President Trump is doing now, backers of Hayes, the governor of Ohio, charged the election was being stolen. The difference was that, unlike now, there was clear evidence of fraud and voter intimidation.”

One more thing. Not everyone responded to calls for unity after the divided Electoral Commission awarded the last 20 disputed votes, giving Hayes a 185-184 Electoral College victory four months after the election.

Angry Democrats, the forerunners of Black Lives Matter and Antifa, cried “Tilden or blood” and planned “to send a threatening and bellicose mob to the National Capital to see that the count is made according to their wishes,” reported an unnamed Washington newspaper.

Given Mr. Epstein’s calculations, the Election Night ballot dumps for Mr. Biden and the Democrats’ collusion with Big Media and Big Tech, we’re seeing the 21st-century equivalent of what Democrats in 1876 called the “stolen election.”

Posted by theodore miraldi at 2:32 PM