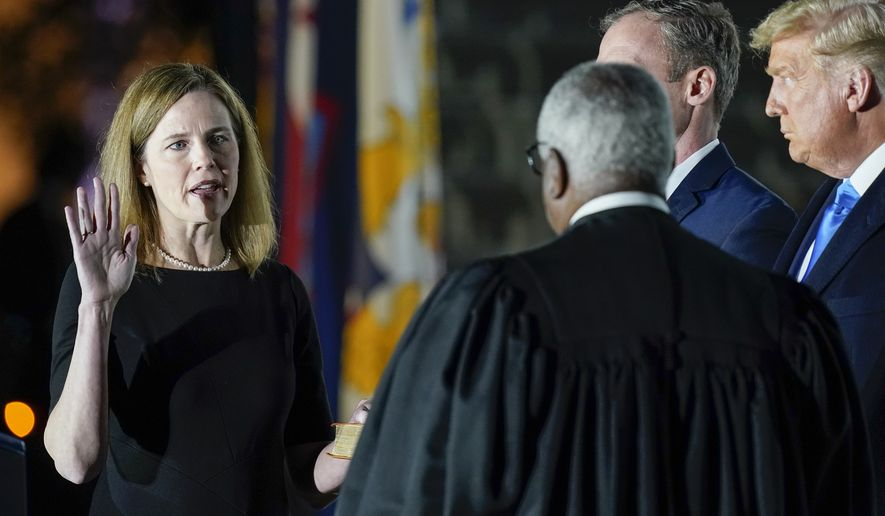 House Speaker Nancy Pelosi had a rhetorical broadside in mind for Supreme Court Justice Amy Coney Barrett as voters headed to the polls on Election Day.

“The president is installing an illegitimate Supreme Court justice one week before the election, after 60 million Americans have voted, who will dismantle” the Affordable Care Act, Mrs. Pelosi said.

Her commentary comes in the wake of a 52-48 vote in the Senate to confirm Justice Barrett, along with an official swearing-in ceremony presided by Chief Justice John Roberts.

Mrs. Pelosi also blasted the 48-year-old justice for not answering a Medicare inquiry during the nomination process to her satisfaction.

Justice Barrett “won’t say, by the way, when asked, by Sen. [Dianne] Feinstein, ‘do you think Medicare is constitutional?’ She said she really couldn’t say,” Mrs. Pelosi said during her conference with Rep. Cheri Bustos, Illinois Democrat.

At issue is Justice Barrett’s response that she would need to hear specific arguments before answering hypothetical scenarios.

“I can’t answer that question in the abstract because, as we’ve talked about, the no hints, no forecast, no previews rule,” Justice Barrett said of the Medicare question during the nomination process.

“I also don’t know what the arguments would be. So I assume Professor [Mike] Rappaport lays out a case but it’s not a question that I’ve ever considered before. But if I did consider it would be in the context of an actual case or controversy,” the nominee said.

Posted by theodore miraldi at 3:28 PM