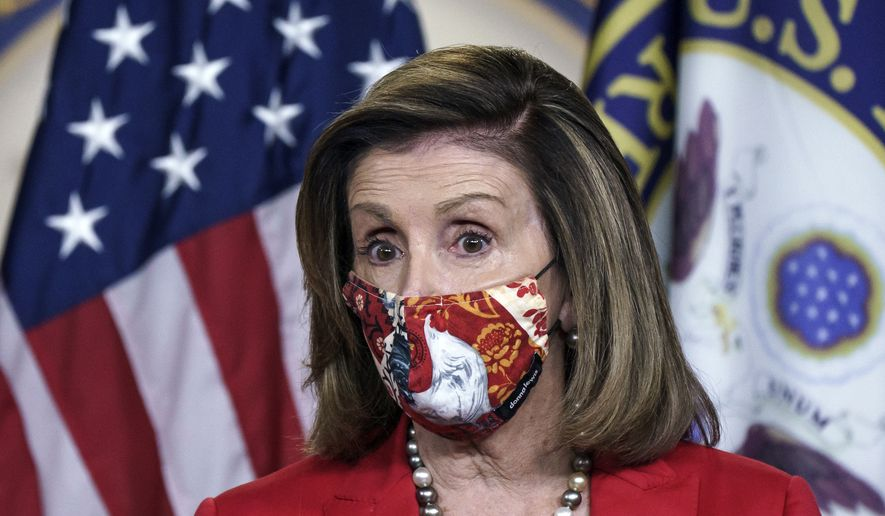 Speaker of the House Nancy Pelosi, D-Calif., talks to reporters about the impact of the election on the political landscape in Congress, at the Capitol in Washington, Friday, Nov. 6, 2020. (AP Photo/J. Scott Applewhite)

“What Joe Biden got in this election was a mandate — a mandate to address the challenges that our country faces as well as to have a positive initiative on how to grow the economy in a fair way,” Mrs. Pelosi said at a press conference on Thursday. “And in order to do that, we must address the COVID, the pandemic. We must.”

“This election was more a, maybe more a referendum on who can handle COVID well than anything else,” Mr. Schumer, New York Democrat, told reporters. “The Donald Trump approach was repudiated, the Joe Biden approach was embraced, and that’s why we think there’s a better chance to get a bill in the lame-duck if only the Republicans would stop embracing the ridiculous shenanigans that Trump is forcing them to do.”

When pressed by reporters on Thursday about whether her position has changed on advancing coronavirus relief legislation, Mrs. Pelosi said, “We’re in the same place, even more so, even more so with the pandemic.”

Mrs. Pelosi and Mr. Schumer accused congressional Republicans of losing touch with reality over their willingness to wait and learn the outcomes of election challenges brought by President Trump and his allies rather than accept projections that have already been made.

Mr. McCarthy referred to the election as yielding the “year of the Republican woman” and said every Democratic incumbent in the House that lost did so to a woman, a minority or a veteran.

Posted by theodore miraldi at 12:11 PM